How to beat Rhydon in Pokemon Go? 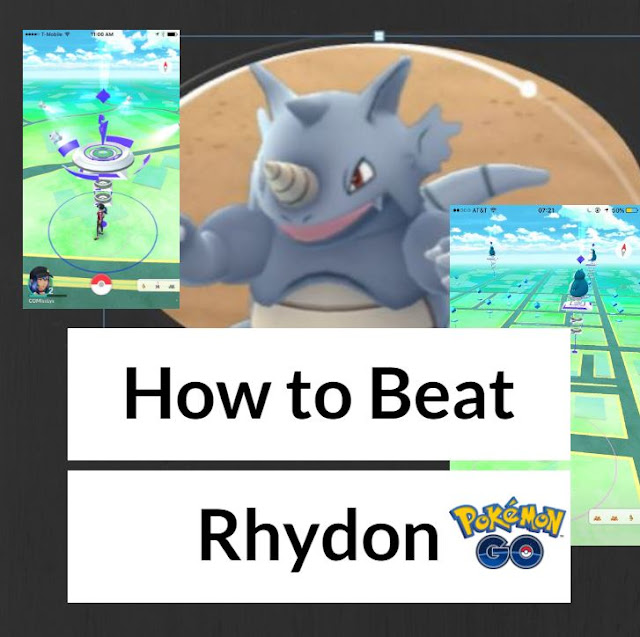 How to beat Rhydon in Pokemon Go

Rhydon is big powerful Pokemon that has high CP.  The commonness of Rhydon combined with the their high CP have caused Rhydon to be popular addition in gyms.  This prevalence however does not mean that Rhydon is a strong defender.  In fact I would say that Rhydon is a rather weak defender and can be removed from gyms rather easily.  We will break down strategies on how to beat Rhydon in the section below.  Rhydon is a descent attacking Pokemon and we use him often against the dreaded gym defender Blissey.  Rhydon is also a very good bubble Pokemon and we will discuss that strategy as well.

Lets learn the backstory of what Rhydon is.
Rhydon is an evolved form of Rhyhorn and looks a bit like a bipedal rhinoceroses.  Rhydon has few characteristics similar to a Dinosaur and few similar to Rhinoceroses.  The pokemon has strong defense and is a Ground / Rock hybrid type of pokemon.

"Protected by an armor-like hide, it is capable of living in molten lava of 3,600 degrees."

Rhydon appears in the anime series in the episode "Riddle Me This" where Ash is pursing the Volcano Badge.  Ash battles the trainer Blaine who uses a Rhydon. Ash uses Pikachu against Rhydon even though Rhydon has a high defense against Electric Pokemon.  Pikachu manages to zap Rhydon on his horn which acts as a lightning rod and fries Blaine's Rhydon.

HOW TO BEAT Rhydon!
BEST POKEMON VS Rhydon
Rhydon COUNTER 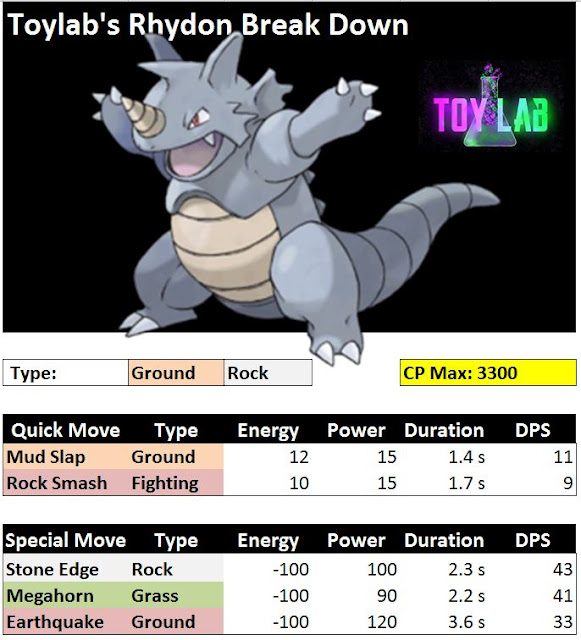 Rhydon is technically both a Ground and Rock Pokeon

Dual type Pokemons are tricky! but Rhydon is pretty simple to break down because he has a ton of weaknesses.   Generally though Rhydon receives a double type disadvantage to Water and Grass attacks making those attacks double devastating against it.  This means that for all of Rhydon's Defensive prowess it has a huge Achilles heel that can be exploited very easily to bring it down.


Top Rhydon 5 Counters:
Mathematically Exeggutor is the best offensive counter to Rhydon followed by Venusaur.  These are great counters to Rhydon however not everyone has these Pokemon.  My general recommendation is to use Vaporeon.  Vaporeon is a very good counter to Rhydon and most players have at least one if not two high CP Vaporeons.

Another advantage with Vaporeon is that his defense is strong as well making him better suited to deal with Rhydon's attacks.

Generally, though a Grass or Water type pokemon will unleash a ton of damage on Rhydon due to the double type advantage and those pokemon will not need to use much defense because the match will be short.

The biggest thing to keep in mind is to make sure the Pokemon you use has Grass or Water type of attacks. 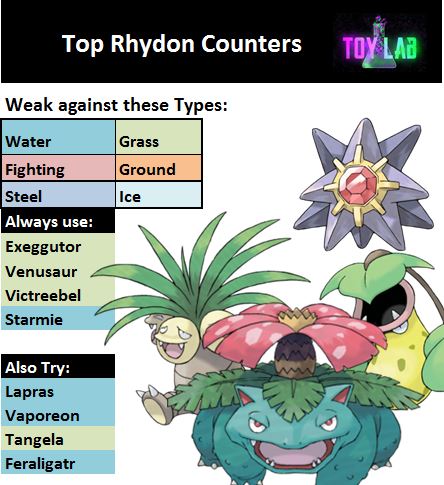