Grant Ward is revealed to be a Hydra Sleeper Agent in the end of Agents of SHIELD Season 1.

BIO: Season 1 (SPOILERS)
Grant Ward is brought in to Coulson's SHIELD team to add some muscle.  Before this he had typically operated alone.  He is considered one of the best and deadliest specialists at SHIELD and is often compared to Romanov AKA Black Widow (Of the Avengers).  He seems to only reluctantly join the team.

He becomes the mentor of the team's newest member Skye.  While, they remain professional both develop romantic feelings for each other.  He also develops a friendship with Fitz on a suicide mission to destroy the Overkill horn.

In the episode the Well we learn that Agent Ward hides a dark family past with a seemingly psychotic and abusive older brother.  He begins a romantic episode with Agent May.  This relationship ends when the Asgardian Sorceress takes control of Agent Ward and reveals he has true feelings for Skye and not for May.

In a Earth shattering revelation Ward is revealed to be loyal to the Clairvoyant John Garrett and Hydra.
It seems John Garrett recruited Ward as a teenager.  It is unknown exactly what Ward was hoping to gain from his loyalty to Garrett.  He seemed annoyed and distressed as Garrett lost his sanity.

At the end of Season Ward was in custody of SHIELD.

Season 2:
Ward is locked in a special cell, where he does work outs, and continues to train.  He remains interested in Skye and when she comes to visit him, he reveals that he knows her Father.  He promises to take her to him.

Ward is used as bargaining chip between Coulson and Ward's Senator brother.  While be transported Ward escapes.  His first act as a freed man is tie up some Hydra agents and leave them for his old SHIELD team.  He then kidnaps and murders his brother.

Ward strikes up a deal with Daniel Whitehall the local Hydra leader.  The deal he hopes will give him access to Skye.  Skye is captured by Ward where he introduces her to her father.  His promise fulfilled he hopes it will serve as a token of rekindling their relationship.  However, these hopes are dashed when Skye escapes by shooting him in the back.

A wounded Ward escapes with Hydra Agent 33.  Working with 33 he continues with a plan to bring down SHIELD.  This ends with the kidnapping Bobbi Morse whom Ward tortures.  In the rescue of Bobbi by SHIELD Agent 33 is killed.

Ward is shown at the end of Season 2 forming a new Hydra group.

In Season 3, Ward true plans are mysterious but he appears to be creating a new Hydra organization.

Actor Brett Dalton revealed in a interview with ComicVine more about Ward vision of this new Hydra.


"This is not like your father’s HYDRA. In the past, they have been about world domination and all these things like that. It’s not so much pro-world domination as it is anti-S.H.I.E.L.D. This is the yin to Coulson’s yang. This is HYDRA in Ward’s vision. Ward isn’t for formality and all of that. Nobody’s twirling their mustache in this particular version of HYDRA. Nobody’s spitting back with their sniveling or cackling in an evil way. That’s not what this is about this season. It’s maybe a more stripped down version of it. But it’s going to be cool because this is somebody that we know is extremely capable and might have a grudge or two against Coulson. S.H.I.E.L.D. can be directly responsible, in his eyes, for two failed relationships that he’s tried to have which were very important to him—one with Skye and one with Agent 33. If it weren’t for S.H.I.E.L.D. meddling in all his affairs, he’d be a much happier man. So there’s an axe to grind."

Grant makes connections with Gideon Mallick a remaining high level Hydra member.  He then is selected to lead a mission to the planet Maveth in order to retrieve the Inhuman Founder of Hydra.  He is killed on the mission by Agent Coulson.  However his body is reanimated and controlled by the Inhuman Founder known as Hive.

Gamora is played by actress Zoe Saldana in the film Guardians of the Galaxy.  Who per usual looks epic as the deadly assassin!

Here are some GIFs of Gamora in action from the film.

Related:
Who is Gamora?
Guardians of the Galaxy Character Hub
Check out the best Gamora art work!

Lady or Madame Hydra cosplay by the cosplayer Callie Cosplay.

Grant Ward: Shhhhh your embarrassing me!

Related
Hydralab posts - The Only freaking posts you should care about! 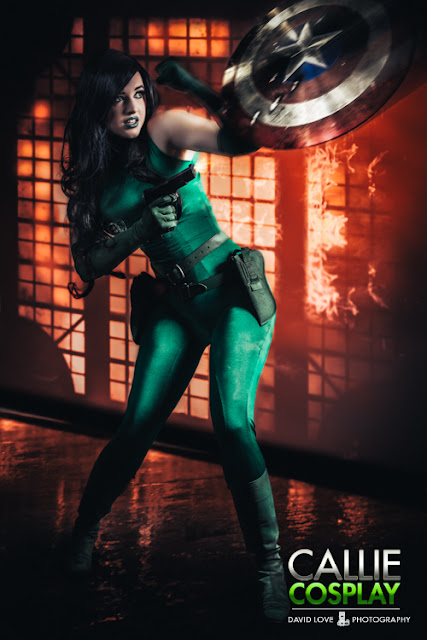 Related
Hydralab posts - The Only freaking posts you should care about!

The top 3 villains of Daredevil

The top 3 Villains of Daredevil!  While the man without fear has many villains 3 villains stand out.


1) The Kingpin -
The Frank Miller years took the Spiderman villain known as the Kingpin and made him into the primary antagonist of Daredevil.  The Frank Miller stories are so popular that it is hard to see another character act as Daredevil nemesis.

Kingpin News:
The Kingpin has been cast!

3) Bullseye
With agility that nearly matches Daredevil's own and his own ruthless fighting style Bullseye is the closest Daredevil comes to fighting a dark version of himself.


Related:
Who is Daredevil?
Defenders Saga News and Casting HUB

Marvel Licenses - Who Owns What?


Marvel Licenses - Who Owns What?

Related Posts:
Comics Breaking News!
What is going on with those Characters?

I get questions a lot on who owns what Marvel Characters.  As Marvel licensed out many of its more bankable characters years before it started its own studio they are limited in some weird ways when it comes to movies.  Their first movie they actually had to team up with another studio because they do not own the Hulk outright.  The good news if you read below is that many characters are coming back into the fold.  Luke Cage, Ghost Rider, Punisher, Blade, Daredevil, Electra have already returned to the fold.  Hulk and Namor should fully revert over the next couple years.  With each character returned new doors are opened.

Some may think that many of these characters are too dark and violent to fit into the MCU as has been presented and tied to the Avengers, you are right.  This is why Marvel is creating a more adult universe (Technically it still will be same universe) where these characters interact.  For now I call this the Hell Kitchen/ Defenders crew.  The Hell Kitchen crew will get a Net Flicks series that will introduce each character then at the end they will team up as the defenders.  These characters include Jessica Jones, Luke Cage, Iron Fist and DareDevil.

I have not heard of Blade/Electra/Ghostrider/Punisher plans yet but they could all fit into the Hell Kitchen series or even make appearances in the phase 3 movie Dr Strange.

Recently purchased licenses back to Marvel.
Some were skeptical that Marvel would do anything with these new licenses because many of them are dark and violent characters. Look at these licenses and tell me if you see plans forming at Marvel.  There is a reason behind them buying these all at once.


Luke Cage -Bought back from SONY/Universal, includes all of his villains.

Ghost Rider-Bought back from SONY, includes all of his villains.

Punisher - Bought back from LionsGate.  Punisher War Zone was disappointing but have you seen Dirty Laundry Short?  The character still has demand if done in the right way.  Look for Punisher Cameos in the Hellkitchen netflicks series.

Blade- After Blade 4 failed to get off the ground it was only a matter of time.  License should also contain many Blade villains and possibly Morbeous who appeared at a distance in Blade in a cut scene in Blade 1.


Daredevil- Bought back from Fox


Team up Possibilities:
Defenders - Already announced to occure at the end of the netflicks series will star Jessica Jones, DareDevil, Luke Cage and Iron Fist


Midnight Sons- the team staring Ghost Rider, Johnny Blaze, Hannibal King, Blade and Morbius is now possible by Marvel. Nothing announced as yet but Marvel now owns the pieces to make this happen.


What do the Outside of Marvel Studios Still Own:

Universal:
Hulk - Universal has Distribution rights only so it is effectively Shared with Marvel this is why Marvel will wait to release another Hulk movie.
Namor- This could revert back to Marvel soon.  Trust me Marvel already has plans on this one Namor Easter Egg in Cap 2.
UPDATE:  I am hearing that Universal may try to make a Namor movie.  This may keep Namor with Universal.  I am not sure if it will be built into the Marvel Cinematic Universe or not.

LionsGate:
ManThing-Lionsgate did a direct to video release of a ManThing movie in 2006 I have never seen it.  Watch for movement on this as Manthing is being hinted in the Marvel U movies.

Manthing Exists in the Marvel Cinematic Universe? Look at these Easter Eggs
Lions Gate no longer owns the Punisher.  Punisher once again is at Marve.

Related Posts:
Who is the Punisher?- Punisher news, stories art and rumors

Comics Breaking News!
What is going on with those Characters?

Klyn - Intergalactic Prison for the Worst of the Worst

What is the Klyn - The Prison featured on Guardians of the Galaxy?


Welcome to the Kiln also known as the worst place in the Galaxy
It is not a very welcoming place truth be told.


Klyn is a giant power source generator that sends power throughout the galaxy.  This is its primary purpose.  It also serves as a penal facility for some of the most dangerous criminals captured in the galaxy.  Like Knowhere Klynn is located on the edge of the expanding universe.  Energy created from the expansion of the universe is absorbed and redistributed by Klynn.  Its distance from anything else made it an ideal location to put a prison.  It is not easy to escape from a place on the edge of the galaxy, you almost need a  Rocket Raccoon or perhaps a giant Tree Thug, or a Space Pilot Scoundrel, maybe an assassin and hey why not a giant green Maniac....But where would you find a group like that?

Population:
Prisoners- Alien criminal prisoners make up the bulk of the population on Klyn.  Some are extremely dangerous and have special reinforced cells.

Monks / Guards – Klynn is considered sacred to an unknown religious order due to its location on the edge of the universe.  Many monks act as guards and maintain the facility.  Not all of the guards are monks, some have been hired by the Pan Galatic Consortium who runs the facility.

History:
No one knows who built Klynn.  It was found and converted by a pan galatic consortium of partners into its present state of power source and prison.  The consortium runs the facility often with the help of the monks.

Prison Stats:
Being sent to Klynn is the equivalent of a death sentence
Klynn has a mortality rate of 99.99%
The life expectancy rate of prisoner on Klynn is 3 years

Movie:
Klynn will be featured in the movie Guardians of the Galaxy.  It appears that The Guardians will be inprisoned there and then breakout.