Who is the Zhou Cheng?

Zhou Cheng is a villain of the character Iron Fist.  He is a martial artist who infused with a demon that likes to feast on the powers of Iron Fist.  On an Iron Fist's 33rd birthday Zhou Cheng seeks out an Iron Fist to kill him and eat his heart.  Zhou Cheng appeared as a guardian of the Hand in Iron Fist season 1 he was played by Lewis Tan.

Alias: He Who Kills Iron Fist, Servant of  Chi'-Lin

A demon called Chi'-Lin desires to eat the an unhatched dragon of Egg of Shou-Lao.  In order to do this it hunts down and kills Iron Fists on their 33rd birthday.  The demon attaches itself to various warriors and then uses them to pursue the current Iron Fist.  Prior to hunting Danny, Chi'-Lin had been denied the egg of Shou Lao after pursuing the Iron Fists of Orson Randall and Kwai Jun-Fan.
It is not clear how long the demon has pursued Iron Fists and how many it has killed.   The demon
Chi'-Lin attaches itself to warriors who are all potentially in the same bloodline.  Kwai Jun-Fan was killed by Chi'-Lin but was denied the heart of Shao Lou when the Thunderer intervened.  Orson Randall found a way to disguise his chi and spent much of his life in hiding.

Danny meets Chi'Lin when he is attached to Zhou Cheng.  Initially, Zhou posed as a helpless victim of a mugging.  He then found the trail of Danny Rand's Chi and began hunting him.  Zhou attacked Danny Rand in a park easily beat the Iron Fist.  Zhou was able to predict all of Iron Fist's moves beforehand by using Chi'-Lin demonic powers to trace Danny's Chi.  Zhou horribly beats Danny and nearly pulls out his heart but Luke Cage, Misty Knight, and Colleen Wing intervene and rescue Danny.  The group barely managed to hold off the powerful martial artist.

Zhou then decided to lure Iron Fist to a location of his choosing.  He took over The School of Thunder and held the students their hostage.  He demanded Iron Fist to face him again.   Danny went to the school but brought the Immortal Weapons John Aman, Fat Cobra, Dog Brother Number 1, and the Bride of Nine Spiders to the school.  Zhou was unable to detect the chi of these other Immortal Weapons and so was defeated.

Zhou then tried to have an agent of his drug Danny's tea.   However, Danny was saved again by Luke and Misty before Zhou could kill him.  Danny recovered and decided it was time to face Zhou and finish the confrontation one way or the other.

This time Danny fought Zhou without using his Chi.  This eliminated the prediction ability of Chi'-Lin and left Zhou confused.  Danny landed a brutal blow to the kneck of Zhou that broke his kneck killing him.

Danny expects for the demon of Chi'-Lin to move to unborn child of Zhou and thus haunt Iron Fist later in the future.

In Zhou's appartment the Immortal Weapons found a map that led them to the Eighth Capital City of Heaven.

Zhou Cheng is possessed by a demon named Chi'-Lin.  The Demon gives Zhou super strength, speed, ability to blow fire and some mind control capabilities.   The most dangerous power of Zhou Cheng is his ability to hunt down Iron Fist by his Chi and predict his moves. 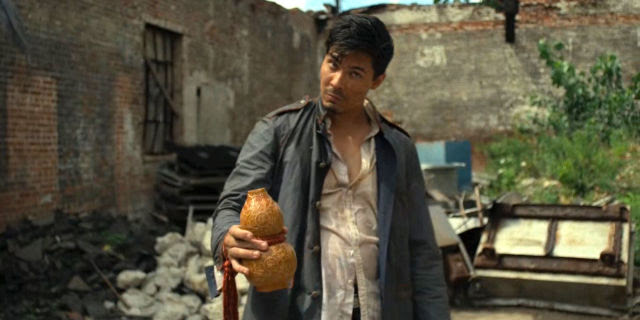 Lewis Tan plays Zhou Cheng in Season 1 of Iron Fist.  Zhou mentions he must drink alcohol as his master requires it of him.  It is unclear if he is referencing Chi'-Lin in this regard.  He guards a gate to a Hand base in much the same way the Iron Fist is meant to guard Kun Lun.

After a battle Danny manages to defeat Zhou and enter the Hand base.