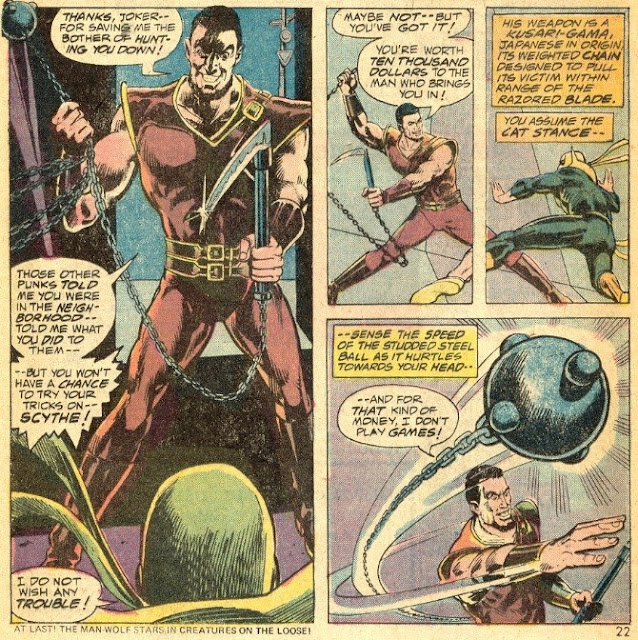 Scythe is the first super villain faced by Iron Fist that offers up a serious challenge to the hero.  After his first appearance Scythe has not appeared since.  A warrior that strongly resembles Scythe appears as a champion of the Hand in the Iron Fist Neflix series.  The warrior is the last Hand champion in a trial by combat.

Quote:   "Hey, you’re good, joker — even better than those muscle-bound morons made you out to be — but nobody can avoid my grapple-ball forever — and joker — that includes you!" (Scythe) 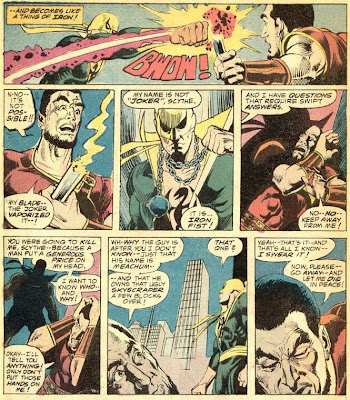 Meachum expected that Iron Fist would come to kill him and so he hired mercenaries and guards to kill him.   He also put a large open contract on Iron Fist's head.  The contract attracted a wide array of thugs whom Iron Fist easily defeated.

Scythe was a talented warrior who had heard about the contract and decided to hunt down the Iron Fist.  He ran into a group of thugs who had been beaten down by Iron Fist and used information they provided to track down the fledgling hero.  Scythe was undettered by the thugs failures at defeating Iron Fist and was confident in his own martial skills to take him down.

The Scythe gained the upperhand in the early parts of the battle.  His use of the Kusarigama was highly skillful and Iron Fist was battling back memories as he had just returned to New York.  While he fought better than the thugs Iron Fist still won in the end.  Funneling his Chi into his fist, he destroyed one end of the Ksuarigama and greatly startling Scythe.  Scythe fell to the ground and begged for his life.  He then told Iron Fist who had hired him.


Scythe is an advanced martial artist with skills in the use of a Kusarigama.

A Kusarigama is a Japanese weapon that has a studded ball on a chain attached to a sickle.  The idea of the weapon is to strike using the ball, or wrap a foe and pull them into the blade.


MCU:
Scythe is the third Hand Champion that Iron Fist must face in trial by combat with the Hand.