Amy Pascal is saying that Spider-Man may pulled back out of the MCU after the sequel to Spider-Man Homecoming.

Amy Pascal has now made comments hinting that the Sony Marvel verse is not a thing and that the characters may all exist in the same universe after all.  The interview was done along with Kevin Fiege and seemed to be intended to save Sony's bacon after many fans (particulary Spider-Man fans have said that Sony's plans are horrible) it is also being done in the back drop of an MCU Spider-Man: Homecoming film that early reviews are lauding as the best Spider-Man film ever.

Marvel does not want the bitterness over Sony's films to spoil the MCU Spider-Man film, and it seems like they are willing to extend out their universe a little bit.  However, it is interesting because Pascal's comments do not directly say that Venom will be in the MCU.  Here is what she says:

“Both movies will now take place in the world that we are creating for Peter Parker.” Pascal explained. “They’ll be adjuncts to it, they may be different locations, but it will still all be in the same world. And they will be connected to each other as well.”


She then gets asked if Spider-Man (Tom Holland version) will appear in any of these films.

“There’s always a chance. I think one of the things that Kevin has done with Marvel that’s so brilliant, is bringing the fans along, and making each movie feel like a chapter in a book. That you have to read that chapter in order to go forward. And I think the investment that fans get to feel in being part of a larger story and understanding what’s happening, is something that I know Sony would want to emulate.”

I think they are trying to make it sound like it will be connected.....but still it is totally seperate.  I tend to think what she means is that Sony is trying to build its own version of the MCU and that someday Spider-Man may appear in that universe after the contract with MCU is over.  Yeah Amy once again nobody cares about the Sony universe.  GIVE ME A BREAK LADY!!!!!!!

I think Kevin needs hug during this interview.  He is looking like hmmmm this is the last time I do an interview with you Amy. 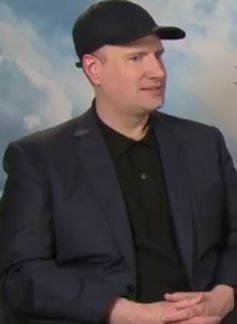 Also watching this interview I am retruck immediatly by how Amy Pascal does not get it.  She seems like a complete bean counter.  Can she please move to something at Sony that has nothing to do with Spider-Man?  UG.  I actually feel bad for Kevin that he has to appear with her.  He actually looks like he is preparing to puke while listening to her.  Serious question, how do you get rid of this lady?  She is more persistent than gonoreah and twice as bad.  Alright that was mean, too mean.

Just Sony stop having dumb ideas.  Let me give you one tip.

Spider-Man characters without Spider-Man will not hold up.  You have allowed Marvel to correct your Spider-Man mistakes, please bring them in on your Venom story.

Update: 4-18-2017
Kevin Feige largely confirms the comment by Amy Pascal that there is no deal for Spider-Man to remain in the MCU beyond the Homecoming Sequel.  Effectively fans will see Tom Holland's in five MCU films.  Captain America: Civil War, Spider-Man Homecoming, Infinity War, Avengers 4, and the sequel to Homecoming.  I guess one thing to think about is that when you count Captain America: Civil War and the Avengers films it is a lot of movies.  Its not a lot of films where Spider-Man is the focus though.  I don't expect Spider-Man to get much more focus in Infinity War or Avengers 4 than he did in Civil War and that is totally ok.  However, I think Spider-Man fans who want to see an MCU Spider-Man would love to see him stay in the MCU in more solo films.  My problem with it is not that Spider-Man needs the other MCU characters to show up in his movies.  He doesn't he has a ton of villains and a huge supporting cast if needed.  I just don't trust SONY to do it well.


"After [Spider-Man] Homecoming, Infinity War, Avengers 4 and the Homecoming sequel, nothing is confirmed. That’s as far as it goes for now. We had a very particular plan about Spidey himself," said Feige in regard to whether Marvel is involved with the Silver Sable, Venom spinoff films."


Original Rant by Marvel Matt
Ok I am a Spider-Man fan like many people he was my gateway superhero into the world of comics.  Like most Spider-Man fans I loathe Amy Pascal.  I can't understand why this lady is in charge of Spider-Man.  Who the heck is she?  She doesn't understand jack about Spider-Man that is for sure. Her lack of understanding though does not seem to matter though as she is still somehow connected and in control of the webslinger's future.  She now mentioned in a recent interview that she expects for Spider-Man to leave the MCU after the Homecoming Sequel.  WHAT!?!!?!?!?!?!?!?!?

Sharpen your pitchforks and light the torches.

I can't believe this if its true its one of the biggest let downs in comic book film HISTORY.

I get that Amy Pascal has her own ideas for what she wants to do with license.  But lets face it the biggest reveal from the SONY hack is that her ideas were TERRIBLE!!!!!!!  It was not just that Marvel was a better home for Spider-Man it was also that they knew better what to do with the character.  Amy you are clueless go do something else PLEASE.


Venom and Silver Sable/Black Cat MORE BAD NEWS!!!!!!!!!!!
And sorry as if that was not bad enough I just realized SONY found a different way to poop all over Spider-Man Fans.

SONY's new projects which are a Venom film and Black Cat / Silver Sable film are supposed to also occure outside of the MCU and not include Spider-Man.  Now I find the marketability of both of these films within the MCU to be questionable.  These are back up characters to Spider-Man in comics these characters have all had limited success without him.  The most success had was definitely Venom but even he has a very hit and miss solo series record.

This just strikes me as SONY really trying to abuse the Spider-Man franchise as a cash grab.  I have no doubt the reason these projects are not going to be included in the MCU is because Kevin Feige thinks they are stupid.  Kevin Feige is likely dead on.  These projects just reek of awful corporate stooges playing around where they do not belong.  I don't think SONY understands that bar in the comic book hero genre is extremely elevated.  When every major DC and Marvel character are getting a movie there is no longer room for some crappy movie about Silver Sable.  Outside of diehard Spider-Man fans I doubt anyone knows who Silver Sable is.  That is not a big market.  Figure it out already or better yet just let Marvel keep making your movies for you.

REAL QUESTION
Why does Amy Pascal have any decision making authority here at all.  She was canned from SONY and I really thought she was kept on as procedure as ceremonial deal for her to save face.  I can't imagine she would be making decisions for SONY on Spider-Man.  That said she likely does still know what the plans for Spider-Man are, which makes these comments extremely disturbing.