Is Iron Fist a member of the Hand? 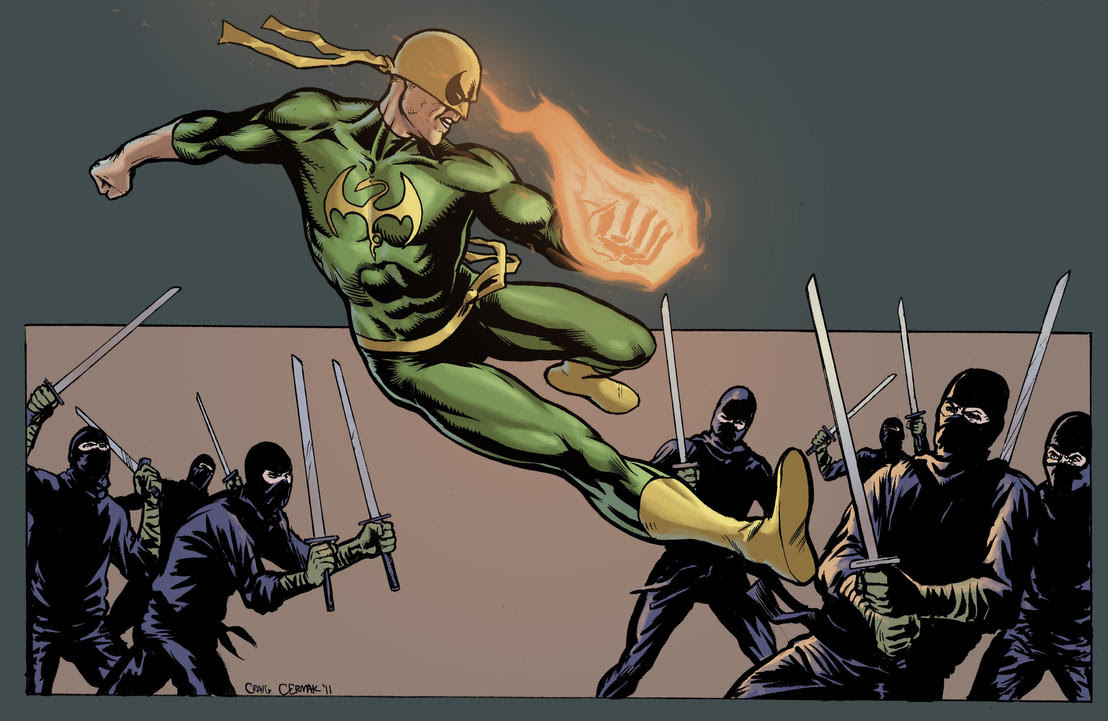 This post is going to discuss parts of Iron Fist and so it has some spoilers.  However, most of these spoilers are reserved to the first few episodes of the season and the rest is mostly speculation.  That said its impossible for me to really discuss this without spoiling something. 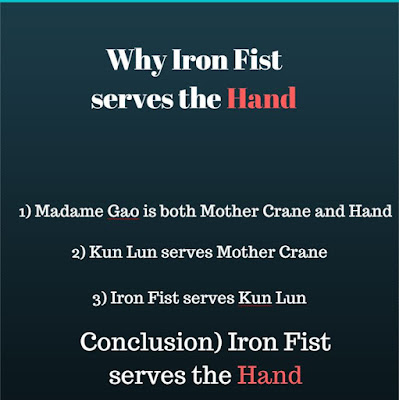 The Order of the Crane Mother
In Iron Fist Season 1 Episode 2 - Danny makes one of the most interesting comments of all to a Psychologist while being locked up in a psychward.  He explains that after surviving the plan crash that killed his parents he is found by monks who take him back to a place called Kun Lun.  He further describes the monks as being members of the Order of the Crane Mother.


Lets talk about Crane Mother in the comics:

Another part of the story introduced with Crane Mother is Orson Randall.  Danny Rand meets a previous Iron Fist by the name of Orson Randall who had shirked battling in the 7 Cities Tournament after finding out a secret that Kun Lun and had been infiltrated by Hydra.  Randall is old and addicted to opium but is able to give Danny what he needs to uncover the infiltration of Hydra.

The key parts here to remember is that Crane Mother is a villain, and that the story involves a corruption and infiltration of evil forces in Kun Lun.

Madame Gao
Madame Gao has become one of the most important characters in the Defenders series.  She has appeared in Daredevil Season 1, 2 and now in Iron Fist Season 1.

I have long believed that Madame Gao introduced in the Daredevil shows was Mother Crane.  She is the first character to loosely mention the 7 Cities.  She mentions traveling very far way to Owlsey. farther than China.  While Gao appears to be an old woman she is quickly shown to be much more than that in Daredevil.  She is able to strike Daredevil and escape and is also able to see through the Kingpin's acts.  She is wise and devious in both of the seasons of Daredevil.  The drug her organization makes also bears the symbol of Kun Lun on it.

One striking thing about Gao does not seem to line up.  In Daredevil season 1 and 2 she appears to be apart from the Hand that are met in both seasons.  She also appears as her own organization in Iron Fist though it is revealed that she is simply a different version of the Hand.

Another interesting aspect of Gao is that she is able to describe places in Kun Lun revealing that she has either been there, or at least has knowledge of the city.  She says that she has been there (Do we believe her here or not?).  In Iron Fist, Gao also comfortably resides over a duel in much the same manner as her comic counterpart does in the 7 Cities Tournament.  The final lynch pin for me was watching Gao listen to Davos in the end.  This seems to hint at her helping him in the future in much the same way her comic counterpart did.

A few things really nagged on me in Iron Fist and one was that we saw very little of Kun Lun and the second was that Davos seemed to be a brutal zealot.  Right from the beginning see Davos take down a hot dog vendor and casually throw ninja stars around the man's head.  He is totally uncaring about people from Earth and can not comprehend why Danny would show them any compassion.  Any form of pleasantry from Davos seem to be him sticking to rules of politeness and not true empathy.  This is actually consistent with how Madame Gao treats people in the show as well.  Polite but with contempt or indifference.  Does this hint toward a greater corruption occurring at Kun Lun?

What if Madame Gao has been in control of Kun Lun this whole time!  They are the order of the Crane Mother and she is the Crane Mother.  This would mean that they have unwittingly have already been conquered by Hand.  Why would they do this?  It seems that the Hand has rivals within itself and if they manage to take control of the Iron Fist they would have the ultimate "bag man", or boogey man to use against their rival Hand organizations.

Iron Fist and Kun Lun serving the Order of the Crane Mother or Gao's branch of the hand.  That's right Iron Fist would technically be working for the Hand. 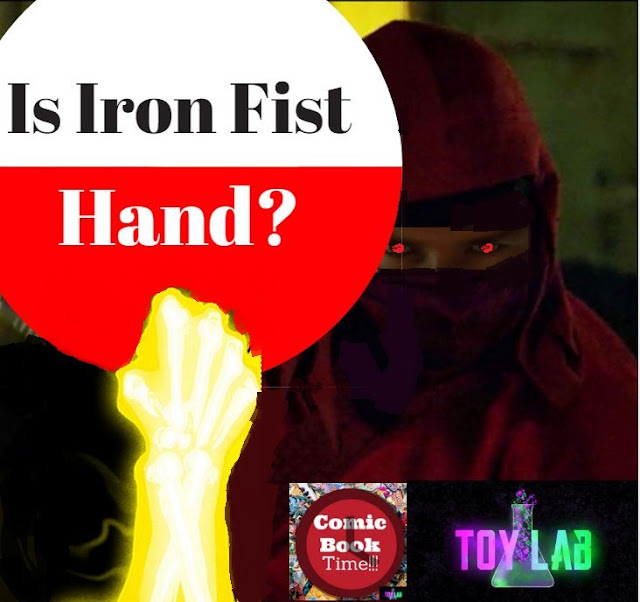 Who is the Hand really?
The big mystery here as we wind toward the Defenders is who is the Hand?  and what exactly are they planning?  Do you recall that giant unexplained pit in Daredevil Season 2?  It seems that in Defenders that the bottomless pit and the Hand will need a better explanation.  So to will the hands organization.  Already we have seen 3 major Hand leaders, Nobu, Gao and now Bakuto.  All of these leaders seem to be running distinct organizations. Maybe the hand is broken into 5 group like 5 fingers on a hand.  Keep in mind that the Chaste who we meet in Daredevil were also initially part of the Hand and could thus represent a 4th group.   Maybe each finger organization has its own theme.  Gao criticizes Bakuto saying he lies, and Bakuto says that Gao rules by fear.


Either way there is a group that we have not met yet, could this be the group that is being led by expected big bad of the Defenders, Alexandra.  Initially, many thought that the villain could be the demon Mephisto and maybe Alexandra does have a demon connection of some kind.  The Hand in the comics are founded by a demon, the realization of the demonic influence is what forces Master Izo to separate from the Hand and form his group the Chaste.  The pit in Daredevil season 2 certainly seemed to hint at demonic influences.

Who ever the Hand really are I look forward to what the Defenders brings out and hopefully ties together the plot points from Daredevil and Iron Fist.  However, my initial thinking that Iron Fist would bring clarity on to who the Hand is may be very mistaken.  It may be that he is the most confused participant of who the Hand really is.  This may also mean that Iron Fists are meant to be more than destroyers and that there is a truth about the Iron Fist that has been hidden from Danny.


Amazon Description:
Experience a brand-new kind of Iron Fist story, one steeped in legends and fables stretching back through the centuries! Orphaned as a child and raised in the lost city of K'un-Lun, Danny Rand returned to America as the mystical martial artist Iron Fist - but all his kung fu skills can't help him find his place in the modern world. After learning that the legacy of the Iron Fist holds more secrets than he ever dreamed, Danny is invited to fight in a tournament against the Immortal Weapons. At stake is the life of his friend, the legacy of his father and mentor...and the future of K'un-Lun!
COLLECTING: Immortal Iron Fist 1-16, Annual 1; Immortal Iron Fist: Orson Randall and the Green Mist of Death 1; Immortal Iron Fist: The Origin of Danny Rand 1; Civil War: Choosing Sides 1