How to beat Gengar


How to beat Gengar!

OOOOOoooooo Look out its a ghost.  Well not just a ghost, but a ghost Pokemon and a rather powerful one at that.  Gengar has some of the best offense of all Pokemon in Pokemon GO making it a great attacker in many situations.  Gengar's defense is not nearly as stellar as his offense which makes him a mediocre gym defender.  None the less, Gengar often appears as a gym defender due to his high CP.

The ghost Pokemon make their first appearance in Pokemon Red and Blue in the infamous Lavender Town.  Lavender Town is this creepy place where dead Pokemon are said to be buried.  As that is not creepy enough a weird, haunting music plays while you are there.  An urban myth became popular that the music actually was a culprit in increased suicide rates in children in Japan.  While this myth is NOT true the fact that the myth became popular reveals just how creepy the Lavender town music is.

Gengar is evolves from Haunter which evolves from Ghastly.   During the Halloween Event Ghastly were made much more common and this increased the amount of Gengar that are seen in gyms.


"Under a full moon, this Pokémon likes to mimic the shadows of people and laugh at their fright." Pokedex entry from Pokemon Red and Blue

Gengar i is a Ghost and Poison type  Pokemon with a weakness to Ghost, Dark, Psychic and Ground Type attacks.

One immediate thing to note is that Ghost Moves are good against Ghost Pokemon.   This means that a Gengar with Ghost moves would be a good offensive counter to other Gengar.  However, keep in mind that from a defensive stand point that a Gengar would be a poor counter.  The same advantage your Gengar has in attacking the other Gengar would also have.   This can still be kind of fun though as it really enhances the need to dodge.  If you want a quick fun match that requires skill then a Gengar vs Gengar could be the way to go. 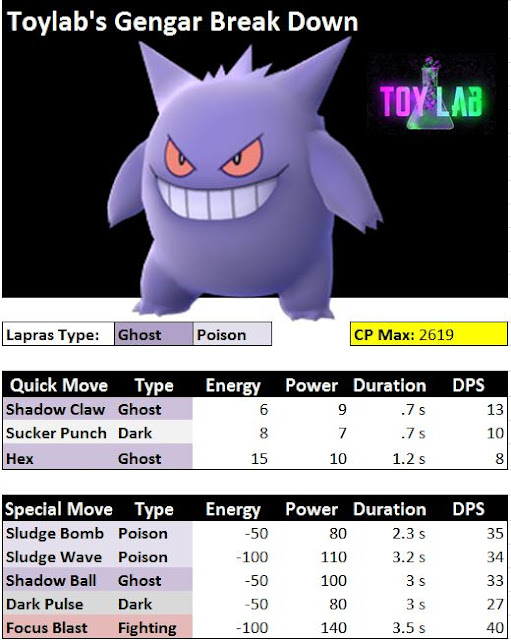 Gengar with an all Ghost / Dark move set works well against other Ghosts.
Shadow Ball and Sludge Bomb are the two special moves I like the best.

Now for the ultimate question!  How do you beat, kill, defeat Gengar.  What Pokemon is a counter Gengar? 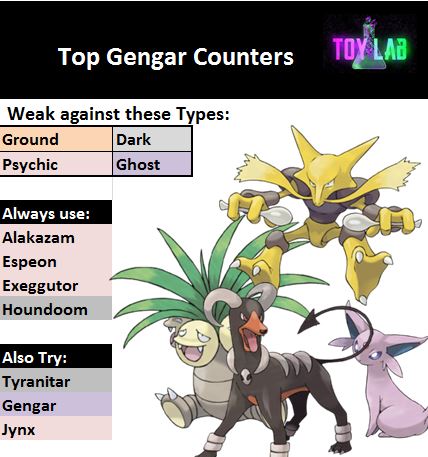 Offensively
When consulting the numbers right now the clear favorite counter for Gengar offensively is Alakazam.  Other Strong candidates who would do a lot of damage to Gengar are Espeon, Exeggutor, and Houndoom.

In order the best move sets for a Machamp are:

For the other pokemon primarily look for those Pokemon to have Fighting moves.  Once again focus on these Pokemon:

Email ThisBlogThis!Share to TwitterShare to FacebookShare to Pinterest
Labels: #Pokemon, Pokemon, Tips on how to beat #Gengar in #PokemonGo