Who is Alpha on the Walking Dead? 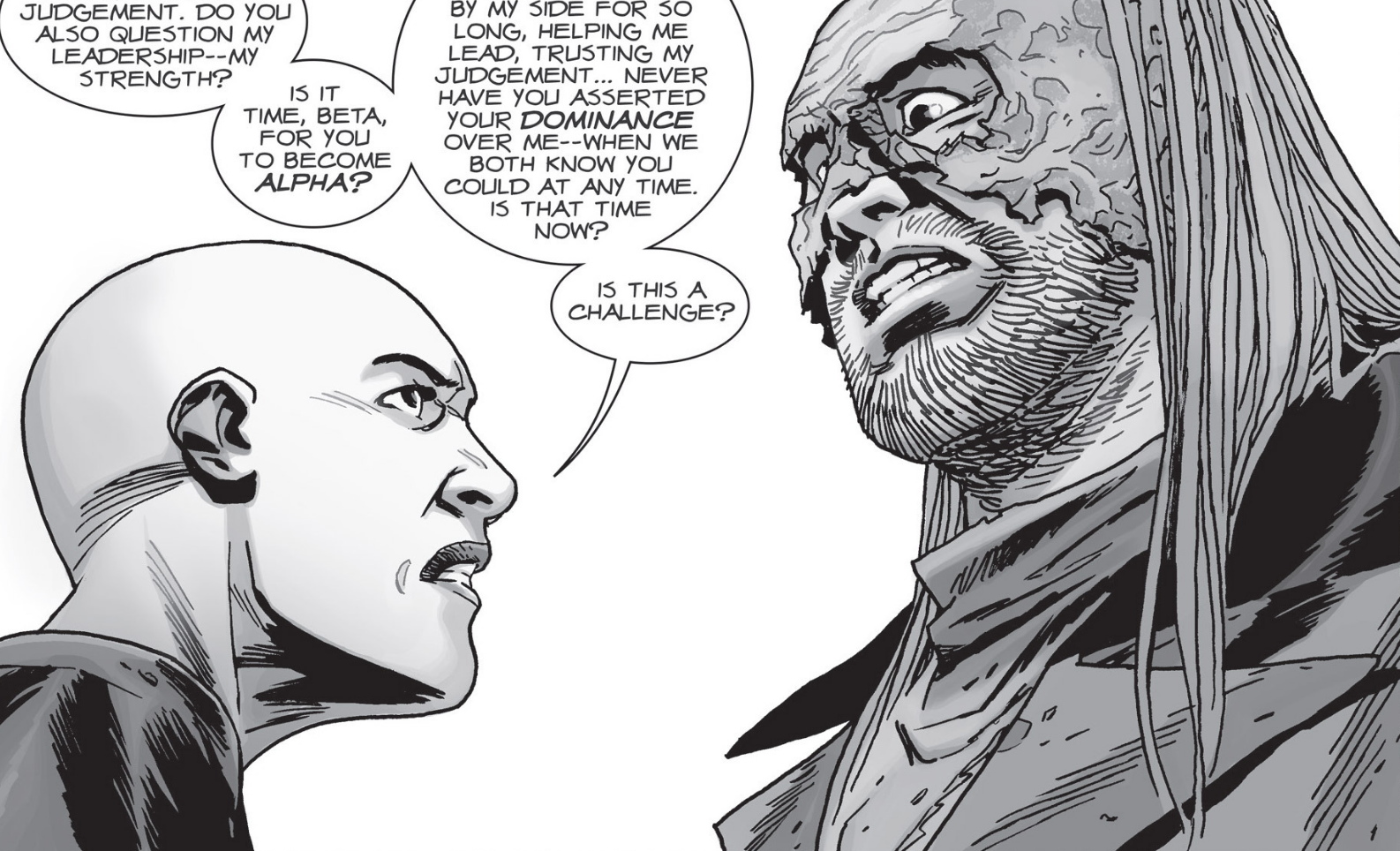 Alpha is the leader of group known as the Whispers in the Walking Dead comics.  She has not yet appeared in the television series.  She has a distinctive look with a bald head.  Samantha Morton Actress from "Fantastic Beasts and Where to Find Them", will play Alpha in The Walking Dead season 9.

An older theory was that the character of Jadis played by Pollyana McIntosh will become Alpha in a later season (More on this below).

Quote:
"We are animals, Negan. Civilization is a myth. That is the truth this world has taught us. We have not risen above our baser instincts... that is what always has and always will drive us. That... ugliness you saw back there? Don't look away... stare into it... see what we are. That is the only way to free yourself."  Alpha discussing the Whispers philosophy with Negan.

Alpha Trailer.  Where is Alpha in this trailer see the shot below:

Walking Dead Store:
Toylab is a member of Amazon Affiliate Program and so we can awesome deals like the ones below shambling your way.

Comic Bio:
The life of Alpha prior to the zombie apocalypse is mysterious.  Some people think she could have been in a highly educated profession like a psychologist or doctor due to the manner in which she is able to analyze people and speak.  At some point Alpha is with a group of survivors who turn into the Whisperers.  It is unknown if she creates the philosophy of the Whisperers or simply takes over the group but she seems to be champion of the Whisperer way of life when confronted by Rick and the Communities.

To Alpha the Whisperer way of life is both the future and past of humanity.  She believes the problems of humanity in the apocalypse are the result of humans not accepting themselves as animals and the might makes right rule of nature.  The Whisperers thus live outside without any form of Shelter and seek to be strong.  They strive to show no emotion as they deem it weak.  Rape and killing are acceptable means of showing strength over the week.  Alpha even allows her own daughter to be repeatedly raped as she hopes this will make her stronger.  The Whisperers create suits made of the dead so they can walk among the dead.  They use armies of the dead as walls and weapons against other survivors by directing herds from the inside.  They manage to tame a massive ocean of the dead as the ultimate weapons against other survivors.  They brutally stake out their border and kill anyone who crosses it without giving any warning.

Alpha has a loyal 2nd in command by the name of Beta.  Beta is less of philosopher than Alpha but is physically imposing.  Alpha is occasionally challenged for leadership but manages to kill those who challenge her.  Alpha tells Beta directly that she believes he could choose to assert his dominance over her however he never has.  Instead, Beta seems to idolize Alpha and is her right hand man.

Alpha begins to meet the communities after a confrontation with them.  Her daughter is Lydia is taken during the fighting.  She brings a Whisper force to Hilltop and trades for two of the community survivors for her daughter.  Carl has befriended Lydia and wants her to stay.  He follows the Whispers and is taken captive by them.  Alpha uses the capture of Carl to learn more about the communities.  She goes undercover to investigate them further.  When she returns Rick has come for Carl.  The two discuss the philosophies of life.  To her the communities are a shrine to a past way of living and are in denial of the true nature of life.  However, when confronted about the rapes of her daughter, Lydia breaks down in tears.  This sign of weakness forces Alpha to let Lydia to go with Rick and Carl.  She hopes Lydia will grow stronger away from the Whisperers.  After Lydia leaves Alpha breaks down, one of the Whisperers comes to comfort her and she cuts off his head so that no one can see that she had a moment of weakness. 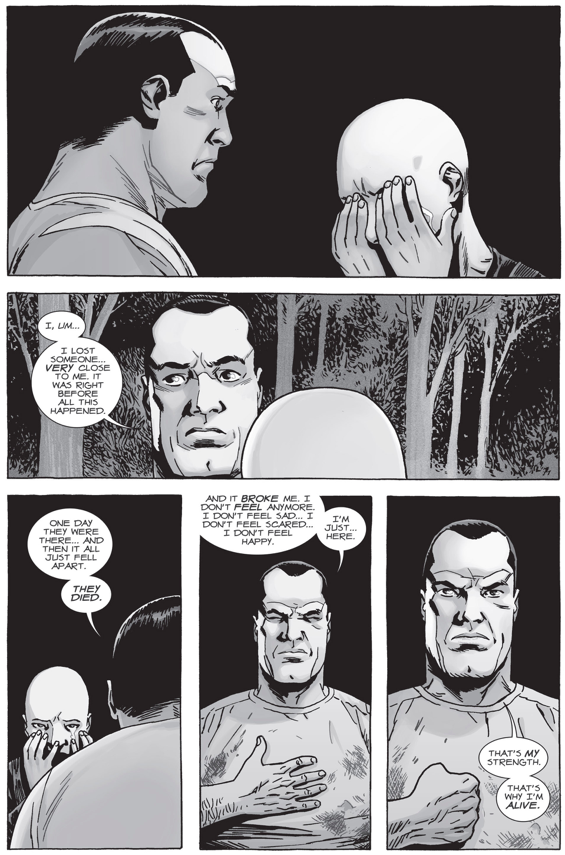 Negan escapes and lives among the Whisperers for a short time.  There he claims to be infatuated with Alpha much to her consternation.  Seeing the rapes in the Whisper camp horrifies Negan and after a short discussion on philosophy he cuts off Alpha's head.  He then brings the head with him back to the communities.

Beta and the other Whisperers find the headless corpse of Alpha and quickly put two and two together that Negan killed her.  One of the Whisperers comments that Negan is not there to claim the mantle of Alpha.  Beta says that he would never have allowed that in the first place and that no one should ever have that mantle again.  He leads the Whispers to war in an attempt to "Kill everyone". 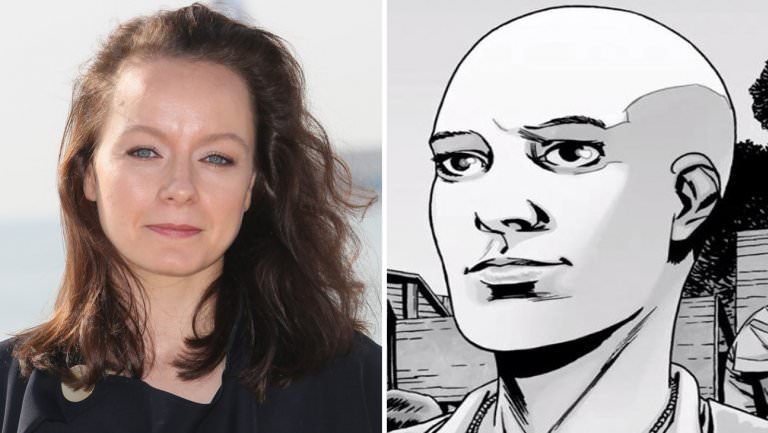 We will add more pictures and video of Samantha playing Alpha as Season 9 comes out.

In a trailer released by AMC the first glimpses of the Whispers are shown.  In the Trailer Beta can clearly be seen but what about Alpha.  There is one shot of a woman from the back, who has a bald head.  Many believe this is the first picture of Alpha on the show. It is hard to say but the picture of a bald woman walking among the undead does certainly fit the bill as Alpha.  At the very least I would say she is being teased with that shot. 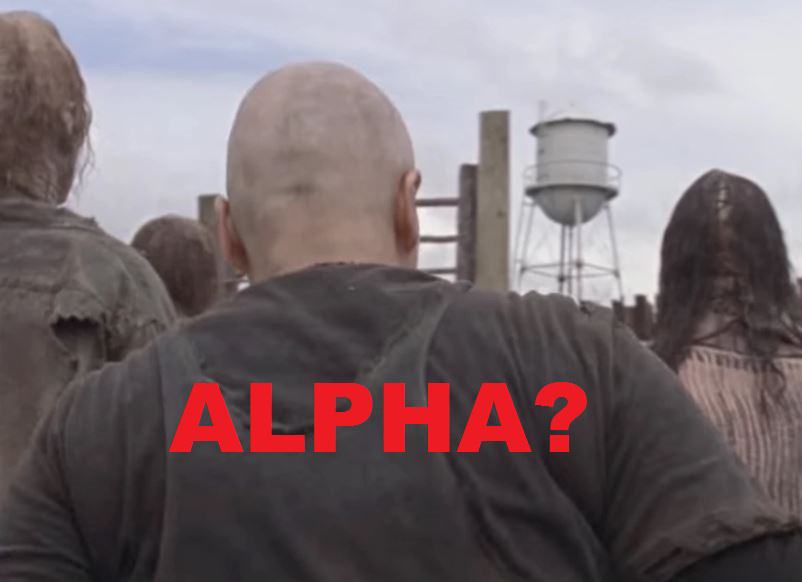 Is Jadis really Alpha? No.
The Heapsters are their own group.

Jadis is a leader of a group called the Heapsters.

Rick encounters a group of militaristic survivors who live in junk yard.  This group is lead by an authoritative woman named Jadis.  Jadis talks in a similar manner as Alpha but it is not bald and her followers do not where walker skin suits.  The group calls it self the Heapsters.  The group is shown to be very large.

Some believe that the character of Jadis played by Pollyana McIntosh will become Alpha in a later season.  The group set up a test for Rick in which he retrieved guns.  They also sent Rick in a gladitorial like battle with a modified walker named Winslow.

After Rick defeated the walker "Winslow" the group agreed to join Rick in battling the Saviors on the condition they would be given more fire arms.

It is unclear if the Heapsters will become the Whisperers or if they are an entirely different group.

Similarities with the comic Whisperers: