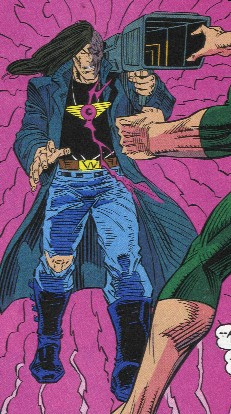 Warrant is one of Iron Fist's first enemies.  He has only appeared as an Iron Fist villain.

Note:  There is another Warrant that does look similar to this Warrant that appeared in Web of Spider-Man.  That Warrant is different and can be told apart because he is fully technological cyborg looking.  Both have a missing eye and long black hair.  The Spider-Man villain Warrant is named Grey Garrison and appears in Web of Comics #110. 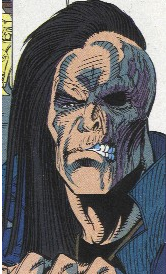 Warrant's origins are unknown but at some point he came into various gadgets from the Tinkerer including large blaster guns and the evil eye that emits a paralysis beam.  He uses these weapons as a mercenary and a bounty hunter.

AIM (Advanced Idea Mechanics) hires Warrant to go after Iron Fist to retrieve a powerful item known as the Anomaly.  Warrant ambushes Iron Fist by blasting him with a large energy gun and then paralyzing the hero with the evil eye.   While Iron Fist is paralyzed Warrant prepares to finish him off with a large blaster.  Iron Fist is saved at the list second by Lillian Hsu who hits Warrant over the head with a trash can.  She then throws a tire over his body which blocks the Evil Eye and paralyzes Iron Fist.  Iron Fist quickly kicks the blaster out of Warrant's hands beat him unconscious.


Powers and Skills:
Warrant is a mercenary and bounty hunter with some martial and military training.  His powers seem to come from gadgets.

He also sports a large array of energy gun weapons.

Warrants face appears to be half decayed no reason for this is given however it could be part of a power not shown.


MCU:
There is no sign or mention of Warrant in the MCU as of yet.