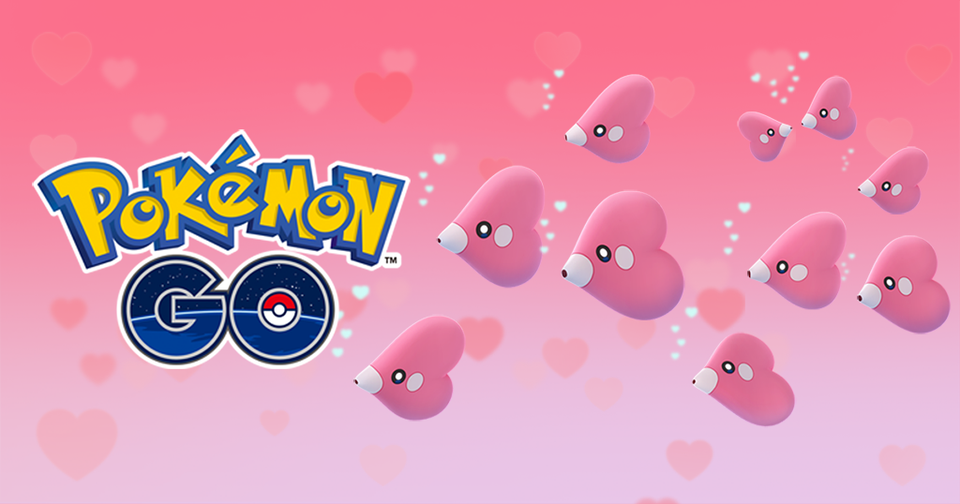 This year's Pokemon Go Valentines Day event is cute but does not offer massive rewards that players have become accustomed to during these events.

This event primarily features the heartshaped generation 3 Pokemon Luvdisc.  Anytime you catch one you earn 3x the stardust you would normally.  This means this Valentines day event is all about catching Luvdiscs and rolling in the Stardust.

Now while that may seem underwhelming it may be better than it seems at first blush.  It takes a lot of Stardust to boost up the elite pokemon in the game to partake in Legendary raids.  This event is a great way to focus on getting heap loads of the stardust and doing just that.

I will also say its pretty fun to look out on your map and at a bunch of floating hearts.

The Event will end on Feb 15th so go out there and catch some hearts!

No Quest System?
The code in the game has been updated with something that looks like a quest system.  Some hoped that the quest system would debut for this event, however it appears the game is saving it.  It would not surprise me if they hold toward the end of spring to launch it before summer and the games effective peak season.


Last Years Valentine Event
Last years Valentines Event was also based off Chansey but was a little different.

The  Valentines day event will feature double candy for all candy generating actions so transferring, catching, buddy pokemon, and hatching pokemon all result in double the normal amount of candy.

Oh Yes and Lure Modules will last for 6 HOURS!!!!!!!!!!!  I expect that this will make Pokestops all over covered in Lures like never before!


Message from Niantic on the event


Trainers,
With Valentine’s Day just around the corner, we couldn’t think of a sweeter time to double the amount of Candy you’ll earn every time you catch, hatch, and transfer Pokémon. Your Buddy Pokémon is also getting into the Valentine’s Day spirit and will find Candy twice as fast!
Throughout the celebration, you’ll notice that Chansey, Clefable, and many other adorable pink Pokémon will be encountered more frequently in the wild. Cleffa, Igglybuff, and Smoochum will also be more likely to hatch from Eggs. And to help you paint your town pink this Valentine’s Day, Lure Modules will last for six hours for the entire duration of the event.
This limited-time celebration will only be available from 11:00 A.M. PST on February 8, 2017, to 11:00 A.M. PST on February 15, 2017, so grab your valentine, get out, and explore the world around you!


TOYLAB TIP: Use this event to get Blissey!

Chansey is going to be the hot Pokemon to catch during this event.   It should be exciting because Blissey the evolved form of Chansey promises to be extremely powerful. Alright so Blissey is not out yet but is a Pokemon expected to come out during Generation 2.  I believe Niantic has Gen 2 ready to go but is waiting for Spring to roll it out world wide.  I'm hopeful that Gen 2 launches with some new features see my post on NPCs, Dungeons and Quests!  Even though Gen 2 is not out there are some pokemon you can catch now that will help you when Gen 2 does launch and top amongst those pokemons is Chansey.  Chansey has become known as one of the toughest gym defenders due to his massive HP and in Gen 2 Chansey picks up an evolved form called Blissey that will be even more POWERFUL.  Muahahhahahahaha.

As Chansey is one of the featured Pokemon in this event this is a great time to try to catch as many of him as you can!

You might also want to check out our post about building a Chansey Castle as a defense tactic.  You can find that post and many others in the Pokemon Go guide below.