The Legend of Zelda: Breath of the Wild

The Legend of Zelda: Into the Wild


The Legend of Zelda: Into the Wild is a new Legend of Zelda game that will feature open world gameplay and a world that is 12x the size of the world in Twilight Princess.  There is said to be very little instruction in the game, which is to allow the gamer to learn about the world as they explore.


In the past, the many races of Hyrule lived together in harmony, the Sheikah's blue aura providing life to the land, and everyone benefited from the Sheikah's advanced technology. That all ended when a beast that came to be known as Calamity Ganon appeared. The Hero and the Princess attempted to stop the evil, but the Hero ultimately failed. As they helped the Princess see to the Hero's injures, the Sheikah, as a last resort, awakened an army consisting of four divine beasts and a massive amount of mechanical guardians, that they had created in secret. They managed to seal Calamity Ganon inside Hyrule Castle, but during the battle, the monster's power turned their army against Hyrule, and out of fear, the King of Hyrule and his people banished the Sheikah from the land.

In the present, an amnesiac Link awakens from a deep sleep, as a mysterious female voice guides him to the now ruined kingdom of Hyrule. He meets an old man and learns that Calamity Ganon has been sealed in Hyrule Castle for one hundred years. Although trapped, Calamity Ganon has continued to grow in power, and Link must defeat it before it breaks free and destroys the world.


Official Trailer
This is the official trailer that showcases many of the games features such as hunting, climbing, gliding and rolling rocks onto monsters.

Toylab's wandering merchant of Hyrule brings you great deals on swords and sorcery by using the mystic arts of the Amazon Affiliate Program:

Get the complete Guide:
The Legend of Zelda: Breath of the Wild is in an immense game both in terms of geography and in terms of things that you can do with it.  Toylab highly recommends getting the Official Guide when you get the game.  It comes with a ton of support material and can help when you get into a jam.  As a member of the Amazon Affiliate Program Toylab can bring you great deals like the one below.


Official  Guide Description:COLLECTOR’S EDITION BONUS: Premium hardcover,extra-large map poster and dedicated 16-page art section
AT-A-GLANCE WALKTHROUGHS: Annotated maps and screenshots show you the way through every quest and dungeon.
TOTALLY COMPREHENSIVE: All side quests, all  Shrines of Trials and all information about collectable items – each mapped out and ready for you to discover and complete! Also includes optional challenges, mini-games, unlockables, Easter eggs, and more.
PUZZLE MASTER: Every single puzzle and riddle unraveled with clear, visual solutions.
EXPERT COMBAT STRATEGY: Practical, reproducible tactics to crush your enemies, even the toughest bosses.
COMPREHENSIVE REFERENCE: Exhaustive appraisals of all items and monsters – including key parameters that are hidden in the game.
EXTRA LARGE MAP POSTER: covering the entire game world.
QUALITY CONTROL: carefully designed to avoid unnecessary story spoilers.


Life in the Ruins

Description:
Forget everything you know about The Legend of Zelda games. Step into a world of discovery, exploration and adventure in The Legend of Zelda: Breath of the Wild, a boundary-breaking new game in the acclaimed series. Travel across fields, through forests and to mountain peaks as you discover what has become of the ruined kingdom of Hyrule in this stunning open-air adventure.


Description
Nintendo Treehouse: Live @ E3 2016. Explore the living, breathing world of The Legend of Zelda: Breath of the Wild in this live gameplay demonstration.

More pictures from The Legend of Zelda: Breath of the Wild:


Here you can see Link looking off a large crest.  There is a volcano and a castle in the distance.

Link battling a Blokgoblin who is also on horseback. 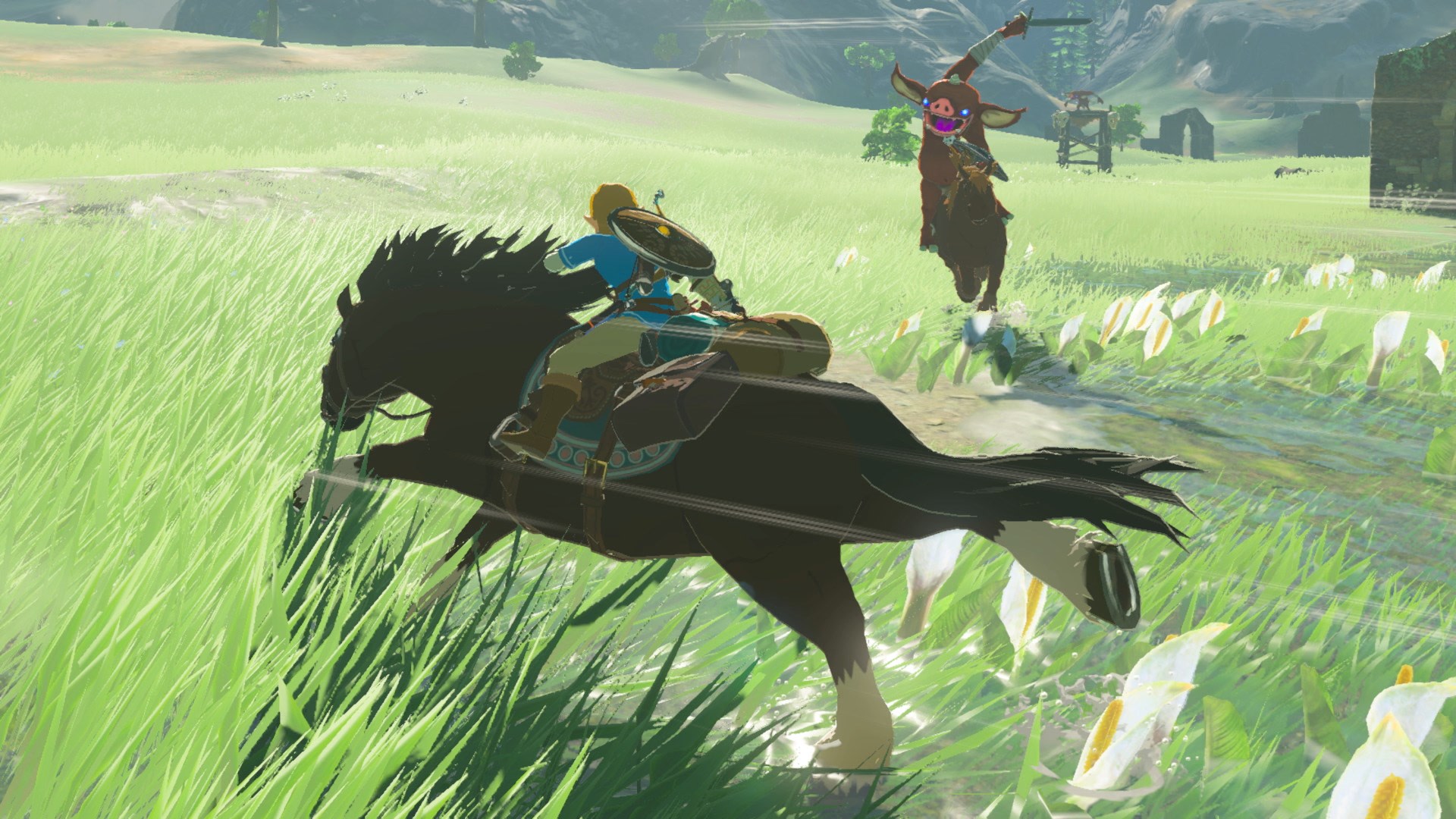