Riverdale is a new show based off of Archie Comics but has a darker tones.  Of course the series would not be complete without the iconic song "Sugar, Sugar".  I was really struck by how cool the new Sugar Sugar song sounded.  It has a lot of the sweet and catchy notes of the original but has been made a lot more edgy.  It seems to fit very well in the new Riverdale series. 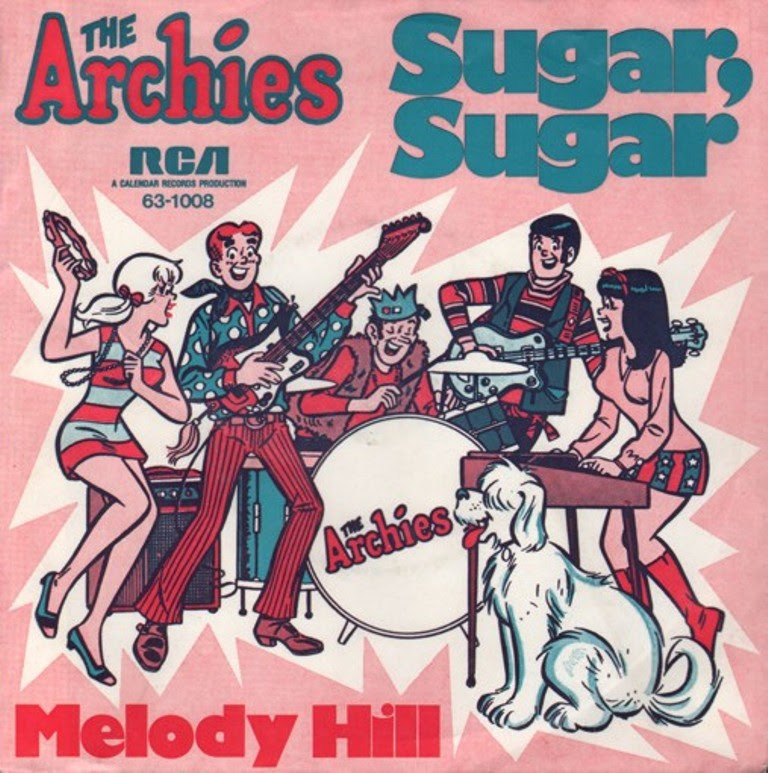 The song "Sugar, Sugar" is so popular that many people do not actually know that it came from from Archie.  Many people will recognize the song who may have no idea who Archie even is.  However, the song itself's roots go right back to the comic character of Archie and his animated 1960s show.

The song "Sugar, Sugar" is the most famous song to come out of 16 animated music segments created for the "The Archie Comedy Hour".  These animated "Music Videos" were shown on CBS Television in 1969.  The song Sugar Sugar immediately became a massive hit.  The song was included on The Archies second album called "Everything's Archie" which was also released in 1969.  The single was on the #1 spot of the Billboard Hot 100 for 4 weeks earning the Archies a gold record and becoming the #1 song of 1969 according to Billboard Magazine.  The Archies would go on to score a 2nd gold record in Jingle Jangle.  (Source Billboard Magazine)

Riverdale's Sugar Sugar song
Josie and Pussycats were also characters that came out of Archie comics.   Though they did not play the song in the famous Archie cartoon series.  I think it makes sense for them to play it now.  The Archie gang overtime deviated from playing music and that role became more associated with the Josie and Pussycats characters.  The version being sung in the show is a cover of "Candygirl" (2009) by Inner Circle featuring Flo Rida which itself was based off the original "Sugar, Sugar" song of 1969.  This song features the voice of Ashleigh Murray who plays Josie, her vocals are backed up by the other characters Asha Bromfield (Melody), Hayley Law (Valerie) and Madelaine Petsch (Cheryl Blossom).

In a CW Press release Asheigh Murray revealed her thoughts on playing the iconic song:


“As if stepping into the shoes of a fiery icon like Josie wasn’t enough, I was gifted the opportunity to reimagine and rock out on the classic ‘Sugar, Sugar.’ And boy, was it sweet.”

You can see the new version of the song as done in the show below along with a clip of the original animated version. I am really impressed at how well the new version works with the Riverdale show.
Riverdale High School Store
Toylab is a member of the Amazon Affiliate program which allows us to pull these great deals on Riverdale and CW merchandise like those below.