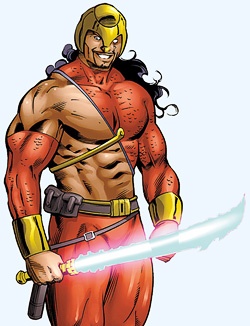 Scimitar is one of Iron Fist's first enemies.  He is a very able martial artist and swordsman.  While Scimitar has battle the X-Men he is primarily known as a villain of Iron Fist.

Bio:
The mantle of Scimitar is passed down among great warriors from generation to generation in the country of Halwan.  Little is known about the men that take up the mantle prior to them taking over the mantle.

At some point the Scimitar warriors became servants for Master Khan and his death cult.  When the cult run afoul of Iron Fist, Scimitar was dispatched to eliminate the new hero.  In order to lure Iron Fist out Scimitar began killing innocent people.  The plan worked and in very little time Iron Fist had hunted down Scimitar.  The speed and fighting skills of Scimitar provided a challenge to Iron Fist but in the end the new Kung Fu hero was victorious.  Iron Fist would later team up with Luke Cage and take down the full death cult surrounding Master Khan.  Scimitar would battle both Iron Fist and Luke Cage and in the end was defeated.

Master Khan was later killed by Namor which left Scimitar without any allegiances.


MCU:
There is no sign yet of Scimitar in the MCU.  If he were to appear it would likely be in the Iron Fist Netflix series.