Professor Willow is the first person you meet in Pokemon Go.  He is your teacher and mentor and you trust him. He seems nice and helpful.  You immediately trust Professor Willow.  What if there is more to Professor Willow though than meets the eye.  What if he wasnt as trust worthy as you think?  Have you ever stopped to ask yourself the question.

What is Professor Willow doing with all those Pokemon you are transfering to him?

Or how about an equally disturbing question.

Where does Pokemon Candy actually come from? 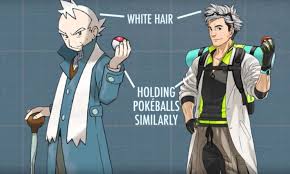 Professor Willow is a key character in the Pokemon Go game he is actually the first person who you meet.  You also continually contact him anytime you transfer a Pokemon.  Professor Willow bears a striking similarity to a character named Pryce who appears in the games (Gold, Silver, SoulSilver, Heart Gold, Black, White and Pokemon Puzzle Challenge).

Reasons why Willow is Pryce.

First, the two look alike provided you assume that Pryce is the older version of Professor Willow.
The two even strike a similar pose in their images with each holding up a Pokeball.

Second, Pryce tells a weird and out of place fact about himself in Soul Silver / Heart Gold.  In this game he reveals that his middle name is actually Willow.  Not only does he reveal this once but he later reiterates it.  This is pretty interesting because the tree based names like Oak / Willow are used for Professors in the Pokemon Games.  At the time gamers took this line to strongly hint at Pryce being a former Poke Professor in the game.  This was something never really followed up in later Pokemon games until......Pokemon Go where a Professor Willow appears.

Quotes from Pryce In Soul Silver and Heart Gold


"Willow is my middle name. Willow is flexible and not easily broken. I'm not giving up yet."
Later if you call Pryce he will say:

Pryce also indicates that he has undergone a hard life with lots of trauma.  He says he has suffered much in life.  He does not elaborate on what caused this suffering but it is possible that he lived through a traumatic war.  It also appears that whatever caused Pryce to have suffered it has not yet happened to his younger Professor Willow self.  Professor Willow seems very optimistic and happy.

Pokemon Gold and Silver before battling Pryce says:
Pokémon have many experiences in their lives, just like we do. I, too, have seen and suffered much in my life. Since I am your elder, let me show you what I mean. I have been with Pokémon since before you were born. I do not lose easily. I,Pryce--the winter trainer-- shall demonstrate my power!"

Why did Professor Willow change professions?  Perhaps he became a leader in the war using Pokemon to battle and at that point could not go back to being academic.  Another thought is that he might be atoning for something he did during the war and as a gym leader is helping bring up a new generation of Pokemon leaders.