Nitro is known as a very powerful and sadistic villain.  He is has battled many heroes and has often come out the better in skirmishes.  He is infamous for creating the explosion that kick started the event of Civil War.  Nitro may appear as an Inhuman in Agents of SHIELD as a character named Terrence Shockly has many similarities.  Actor John Pyper-Ferguson plays Terrence Shockley in Agents of SHIELD season 4.

Quote:  "...You're playing with the big boys now."  (Nitro before exploding and destroying Stamford Connecticut).

Notable:  While not the most popular villain in Marvel, Nitro is very important.  He is known for effectively killing Captain Marvel, Namorita, Night Thrasher and Microbe.  The Stamford disaster caused by Nitro was the event that led to the passing of the Super Hero Registration act.


Bio:
Robert Hunter is experimented on by a Kree group called the Lunatic Legion.  The Lunatic Legion's experimentation gives Robert the amazing power of being a living bomb.  He is able to blow up in a massive explosion and reform himself as if nothing happened.  For a time Nitro serves the Lunatic Legion as an agent.   In his initial mission to steal compound 33 for the Lunatic Legion he runs into the Kree super hero Captain Marvel aka Mar-Vell.  Mar-Vell defeats the villain but during the battle is exposed to nerve gas.  This event would later lead to Mar-Vell getting cancer and killing him.

Nitro would battle and somewhat embarrasses Omega the Unknown.  Nitro initially attacked him because he thought he was Mar Vell.  Mar Vell later returned and was hunted down by Nitro.  Captain Marvel still managed to defeat the vengeful villain.

Spider-Man and Quasar battled Nitro after he escaped from Project Pegasus.  While the two recaptured him he almost immediately was freed by the Vulture.  He has battles with the Untouchables, Genis-Vell, the New Mutants, and the Secret Defenders.

A near catastrophe nearly happens when the Heroes for Hire confront Nitro.  Hercules throws a tanker of gas at Nitro creating an even greater explosion.  Iron Fist realizes Hercules is drunk and asks him to step away.  Iron Fist tries to use his fist power on Nitro but is thrown back.  He is barely saved by the Black Knight who absorbs the energy of Nitro's explosion into his shield and channels it down throw is sword to blow out the ground beneath Nitro.

Iron Man confronts Nitro and has more success against them most heroes.  Stark sees that frequency is emitted before Nitro explodes.  He recreates this frequency and emits it at Nitro and it causes Nitro to explode.  Stark continues to emit the frequency again and again causing Nitro to continually explode.  Nitro eventually collapses out of exhaustion using too much energy exploding.

Stamford Connecticut - Civil War
In a battle with the New Warriors, Nitro explodes killing 60 children and the heroes Night Thrasher, Namorita and Microbe.  The tragic event is the catalyst for the Super Hero Registration act and Marvel Civil War.  The explosion of Nitro was far beyond his normal level of explosion and nearly levels the entire the city.

Wolverine
Wolverine and SHIELD are hunting for Nitro.  Both groups find him at about the same time.  A massive explosion from Nitro kill the SHIELD agents and seemingly Wolverine as well.  Nitro takes a call from a government official who is behind Nitro's enhanced powers and is behind the Stamford Connecticut.  During the call a fully regenerated Wolverine pounced and beats up Nitro.  Sticking close to Nitro the villain is unable to use his power.  Nitro reveals that his power was enhanced through taking Mutant Growth Hormone.  The fight is broken up by a group of Alanteans who seek vengeance of Nitro for killing of Namorita.  Wolverine tracks down Nitro to Alantis but in the end decides to leave Nitro in the hands of Alanteans.   Nitro then became embroiled in a political battle of Namor and is son Kamar.  In the end he ends up in the hands of Speedball who now goes by the name of Penance.  Penance tortures the hell out of Nitro and terrifies even villains.

Nitro temporarily escapes before being recaptured and placed into holding at the Pleasant Hill facility.   There his mind is wiped and he goes by the name of Roger.

Nitro is a human bomb that can create massive explosions that do not effect him as he reforms himself after each explosion.

While taking Mutant Growth Hormone the powers of Nitro are greatly increased. 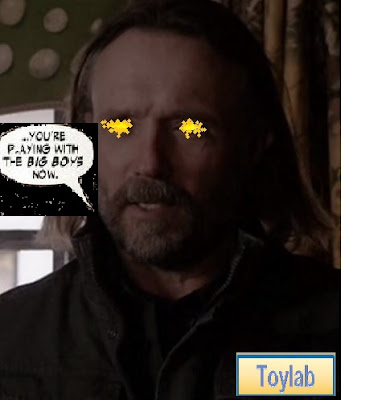 Actor John Pyper-Ferguson as Terrence Shockley in Agents of SHIELD.

Shockley brings a Terrigen Crystal into the office of Senator Nadeer.  He feels that the Senator has outlived her usefulness.   He breaks the crystal thinking that it would reveal Nadeer to be an Inhuman like her brother but instead Shockley enters a cocoon like state.  When gets out of the cocoon he finds that a mysterious explosion has occurred that has destroyed the office and killed Senator Nadeer.

SHIELD quickly finds that Shockley is able to explode and put himself back together.  Fitz finds that Shockley body emits a frequency prior to exploding.  Quake manages to copy this frequency causing Shockley to preemptively explode until he is worn down.  He is then stored away in his gaseous form unable to reform.
Fun Note:  This method of defeating Nitro is very similar to the method used by Tony Stark.


Is Shockley the character Nitro?
The character has a different name than Nitro however that could just be to throw off viewers.  While Nitro had a different origin in the comics it was similar due to both origins being based off of the Kree.  Other than those differences the similarities really stack up.

Both characters have the same super power
The Power works the same way
Both have long shoulder length hair
Both are mercenary / villains
The way they are beaten by Tony Stark in the comics and by Quake in Agents of SHIELD is the same.

Verdict:  I have been tricked by the show before but from all appearances Shockley is Nitro.