Jughead is the best friend of Archie the main character from Archie comics.  He has appeared in TV, comics, radio shows and comics since his first appearance in the 1940s.  Jughead is played by actor Cole Sprouse in the C.W. TV series Riverdale.

Jughead is a smart, sardonic, easy going, and generally idiosyncratic teenager in Riverdale High School.  His oddness often makes him something of an outsider in town but this does not seem to bother him.  Despite their differences he is best friends with Archie Andrews.  Jughead is a new kid in town and befriends Archie early in his highschool career.  He often helps Archie get out of problems that he has gotten himself into.

Jughead is depicted as having a long nose and is constantly wearing an S marked sweatshirt and a crownlike beanie called a whoopie cap.  The meaning behind the S on his sweatshirt is a mystery though in one comic he says it stands for "soup, sandwich, steak and all kinds of goodies!", other possibilities are the name of a cousin, and a former high school he attended prior to Riverdale.  In one comic he says the S is for, "Stop asking".

Jughead plays the drums in the garage band the Archies.

Considered as being odd in Riverdale he is often the target of bullying and pranks.  However, he often manages to hold his own and defeat attackers with his wit.   Many stories revolve around prank competitions between Jughead and the school's super jock Reggie with Jughead often cleverly winning.  While Reggie and Jughead have adversial relationship they are also often depicted as being friends.

Veronica often clashes with Jughead because she can't stand his laid back style.  He in turn sees her as a snob. 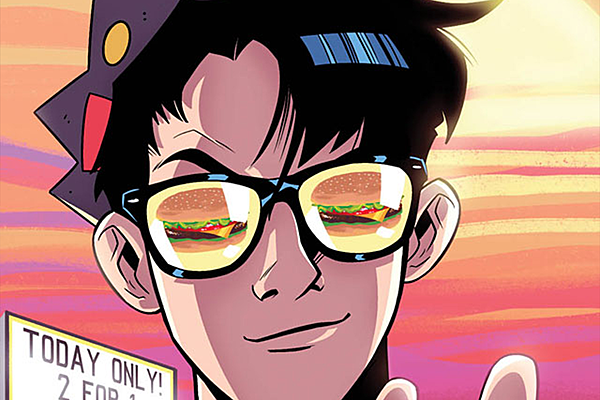 Jughead rarely gets into romantic relationships and often cites them as complicating life.  This is likely due to him watching Archie's struggles with his love triangle relationship with Betty and Veronica.  Jughead often expresses a true love for food (Usually cheeseburgers) and is often seen consuming a copious amounts of food.  His love for food has been explained in some stories as a mechanism for covering his nervousness around girls or overcoming depression.  Despite his copious amounts of eating Jughead remains skinny this is often attributed to an abnormally high metabolism.


Riverdale TV Series on the CW
Riverdale is a show based off of Archie Comics but has a darker tone. Jughead is a main character in the series and is played by actor Cole Sprouse.  Jughead serves as the series narrator. Jugheads is the highschool outsider and an aspiring writer and journalist.  He serves as the narrator for the show.  He is shown researching the death of Jason Blossom, which is the major story in the small town of Riverdale.

Archie has fallen out of friendship with his former best friend Jughead.  Jughead reveals that he knows about Archie's relationship with Miss Grundy and urges him to come forward and do the right thing.   The two have a fight over this.

Despite, the personal problems brewing in their friendship the pair remain loyal to each other when the next day Archie stands up for Jughead.  Reggie is making wise cracks about the death of Jason Blossom in which he targets Jughead as the likely perpetrator due to his oddness.  Archie defends Jughead and tells Reggie to back off.  Archie pushes Reggie who responds by throwing Archie into a vending machine and punching him hard giving him a large shiner.

Jughead witnesses Archie having a tense conversation with Miss Grundy and smiles because he can tell Archie is standing up for what is right.  The two run into each other and Archie asks if they are still friends.  Jughead sardonically says they will need to discuss it over many, many hamburgers.   They run into Betty and Veronica at Pops where they all sit down to enjoy ice cream sodas and likely a lot more in the case of Jughead.

The drive in theater that Jughead works at is closing down after an anonymous buyer placed a large offer for the theater.   The theater had been struggling since a local gang the Southside Serpents began using it as a place to hang out.  In the end it is revealed that Jughead had been trying to save the theater because he is homeless and had been using the theater to sleep at.  As he is leaving he is confronted by his father who is the leader of the Southside Serpents.

Interview with Cole Sprouse on Jughead:
Cole Sprouse is well known for his work on Disney in the show Suite Life of Zack and Cody.  In Riverdale he plays a much tonally darker character.  He was interviewed by Abraham Reisman of the Vulture about his role as Jughead and had a variety of insightful things to say.   The full interview can be found at:
http://www.vulture.com/2017/02/cole-sprouse-riverdale-jughead-trump.html

A few exerpts from the interview:

On why Jughead is used as the narrator:


"...He’s more objective than the rest of the town. He is now, especially within this universe, a character that fits on the outside of his society, and I think that gives him an interesting perspective on the inner workings of it. "

On who Jughead is:


"...He’s almost an imaginary friend, not like a real character. But in this, we still very much try to deal with Jughead as this cynical, sardonic, objective character. He’s very much on the outside. And, much like real comedians or real jokesters or real cynics, Jughead has a troubled past. But we still keep the fundamental basis of Jughead strong."

On Donald Trump and Riverdale:


"...what it means to be representing such a fundamental, all-American kind of narrative with this platform of Donald Trump being a return to an all-American understanding. I haven’t really come to a conclusion about what it means, but the timing could not be more uncanny. Whenever someone says, or whenever someone harkens back to, a golden age of the U.S. — usually the ‘40s or ‘50s — 90 percent of the time, they’re a straight white man."

"I think Archie fits within this very interesting place, where the first iteration of those comics came out of that same exact time period. That also puts us in a perfect position to try and show the reality of that narrative. Archie holds a responsibility upon itself as a product of this “golden age,” which is something I think we need to recognize and accept and confront."