Josie and Pussycats sing All For Me on Riverdale

Riverdale is a new show based off of Archie Comics but has a darker tones.

Did you know that Josie and the Pussycats were part of the Archie Comics Universe?  Well they are and they are being put to use wonderfully in the show Riverdale.

The Pussy Cats are back this Thursday with a new song called "All For Me".  Similar to the Archie cartoon series of the 1960s it seems each episode of Riverdale will feature a musical number.  So far Josie and the Pussycats have been killing it.  The cover of the song "Sugar Sugar" was amazing and really helped the set the tone for what the series is going for and how it will be different.

The actresses / songstresses of the Pussycats are Ashleigh Murray (Josie), Asha Bromfield (Melody) and Hayley Law (Valerie) I think they will all be house hold names if they continue to crank out numbers like this.  Speaking of which I really see a Riverdale soundtrack coming out and going gold. With this only being the third episode of Riverdale it almost seems like its too early to be talking about a soundtrack in that way but with music this good how can you not be thinking it.

I know the Guardians of the Galaxy sound track did well but having a comic based show crank out original music this good is still very unique and special.  I really hope Riverdale can keep this up.  What will the Pussycats play next?  Also will Archie also get a band together and play musical numbers?  Riverdale High School would have a talent show that I would actually want to see!


Riverdale All for Me Video:

Pictures from All for Me: 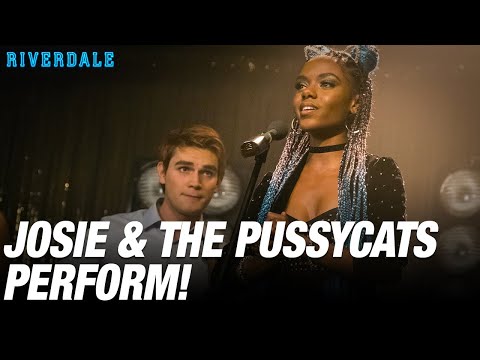 Email ThisBlogThis!Share to TwitterShare to FacebookShare to Pinterest
Labels: All for Me, Josie, Josie and the Pussycats, Pussycats, Riverdale, Riverdale soundtrack, songs