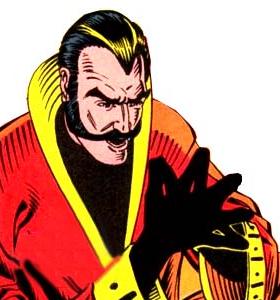 Abbot Thanademos is one of Iron Fist's first enemies.  He has only appeared as an Iron Fist villain.


Through unknown means a man named Thanademos came into possession of a magic tomb that he calls the Tomb of Uncoma.  Thanademos learns that tomb can bring people out of a coma but once brought out of the coma he gains control of them.  Thanademos then goes around seeking out the families of people who have been in a longterm coma.  Many family members are amazed at what Thanademos is able to do and form up a cult around them.  They also set him up with a base of operations in the previously abandoned St. Mark's Church.

While Thanademos was able to revive people he did not fully understand the magic that came from the book of Uncoma or how it worked.  He also did not know what weaknesses the magic might have which would later work against his plans of creating an army of thralls.

Various comatose people were taken to the church then went through a ritual by Thanademos.  He would wrap them up like mummies then put them in ornamented caskets.  Then when he spoke from the Tomb of Uncoma the comatose people would rise up.  The people who were revived became the thralls of Thanademos and were forced to obey his commands.  While Thanademos was doing this Iron Fist was drawn to St Marks.  Iron Fist had just been revived from the dead and was still in a state close to death and so was affected by the spells coming from the tomb of uncoma.  Iron Fist was thus made into a thrall of Thanademos however Thanademos did not realize who he was.

Thanademos realized that he was unable to control one of the people who wore an Ankh necklace.  Iron Fist manages to get hold of the Ankh and regains control of himself.  He battles Thanademos and his thralls.  As Thanademos tries to flee Iron Fist breaks off the Gong on altar's wall it rolls and knocks down Thanademos who is taken into police custody.

Has a magical book called the Tomb of Uncoma that allows him to gain control of people who are sick or in a coma.


MCU:
There is no sign or mention of Abbot Thanademos in the MCU as of yet.  I would look for mentions of St Marks Church as a hint he could be used.