Who is Zzutak - Marvel Monster

Zzutak is a giant monster that appeared in early Marvel comics.  He is a possible monster that could appear in the 2017 Marvel event Monsters Unleashed.

Alias: The thing that shouldn't exist

An American artist is given magical "3d" paints and coerced into painting a monster on a giant canvas in Mexico.  The artist paints a monster that he calls Zzutak.  To his astonishment Zzutak leaps off the canvas becoming real.  An Aztek medicine man reveals himself.  He claims to be part of a lost tribe of Azteks that have been waiting to use the paints to create an army of monsters.  Monsters created with the paints seem fall under their control.  The medicine man demands that the artist create another monster for the army.  The artist complies and paints a new monster named Xxirys.   While he paints this Xxirys he continually thinks "You are Zzutak's enemy".  When this monster leaps from the canvas it immediately begins to battle Zzutak.  The pair are eventually buried in a crumbling temple.  The artist leaves thinking that he has seen the last of Zzutak. 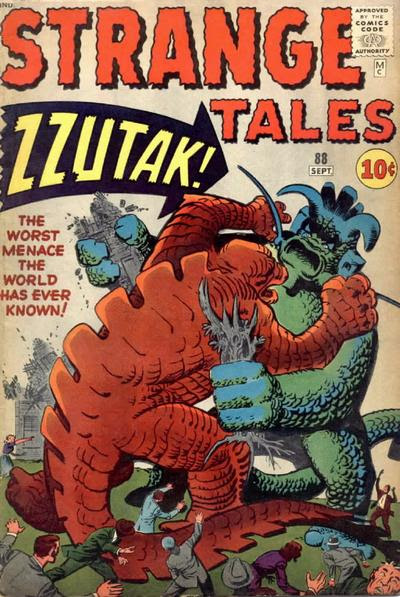 The artist is later kidnapped along with his son by the Azteks and forced to create Zzutak again.  He does so but also brings back his enemy monster, Xxirys.  This time Xxirys is controlled by the Fantastic Four who help the artist bury Zzutak forever.

Zzutak appears as a guardian of the Mole Man on Monster Island.  He confronts Magik and Shadow Cat when the pair are searching for a girl named Bo.


Zzutak is among a group of monsters that is summoned by Kid Kaiju in Monsters Unleashed #1.  It is unclear what Kid Kaiju's plan for the monsters is.