New Years
For New Years running through Jan 8, 2017 the starter Pokemon will be more common and spawning in normal areas.  I have seen multiple bulbasaurs, a few charmanders, but still no squirtles.  My guess he is out there but i havent been in water pokemon areas.
This is a pretty big deal because these have been some of the hardest pokemon to evolve in the game so be sure to take advantage of this increased spawn rate.

Additionally there are some new gifts available in the shop that include lures.  I personally like the cheapest one which includes lures and a 100 regulat pokeballs.

Christmas Event
Pokemon Go is using the Christmas Event to release some new Pokemon.  Many hoped that Niantic would release either a Legendary Pokemon or all of the Gen 2 Pokemon and this does not seem to be the case.  The game released about 8 Pokemon that all need to caught by hatching them eggs, a festive Pikachu, and also a have a limited time offer for presents in the shop.
One additional aspect of the Pokemon GO Christmas is that a 1 hatch Incubator will be given at the first Pokestop used during the day, each day during the holiday event.  This is a really good deal as Incubators are generally hard to come by.  Togepi and Pichu have increased chances to be given in a egg during the event making it even more worthwhile to try walk and hatch some eggs during the Christmas Event.

Festive Pikachu
There is also a special Pikachu that has a Christmas hat on.  There are supposedly more normal Pikachus spawning during the Holiday season as well.  The Pikachu with hat does not have any special abilities or anything like that he just is extra cute.

MY FESTIVE PIKACHU HUNT
I have been looking for Festive Pikachu everywhere.  I visited my normal haunts of where I have caught Pikachu in the past, but alas I had no luck.  No Pikachus.  Then I heard that festive pikachus were appearing a park across town.  So my wife, 4 year old daughter and I packed into a car and hunted for four hours with no luck in that park.  Then as we were leaving we SAW HIM.  We tried to catch him but alas.......HE RAN AWAY.  No!!!!

All was not lost though on Christmas day I was walking the dog to my normal Pokestop and THERE HE WAS AGAIN and this time I caught him.  My festive Pikachu is only 130 CP but I'd love to build him up and take over gyms with him.  I could make him into a little mascot of the Toylab blog.

Message from Niantic on the event

Published on Dec 12, 2016
Professor Willow has discovered Togepi and Pichu hatching from Eggs! Starting later today, Trainers will have the opportunity to hatch these and several other Pokémon that were originally discovered in the Johto Region in Pokémon Gold and Pokémon Silver video games. These are the first of more Pokémon coming to Pokémon GO over the next few months. 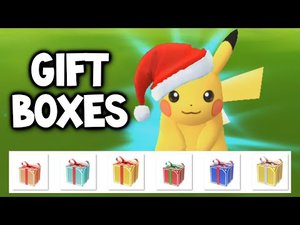 So the deal with the presents.  If you go to the store there are 3 new items you can buy.  The items are actually packages that include a combination of items.  These presents will only be offered during the holidays.  Some people were hoping that what ever was in the presents would be free and I am sorry to say they do cost PokeCoins.  They are very good deals though.

The Appearance of baby Pokemon!

The Pokemon released are believed to be.

These Pokemon are not available to be captured in the wild but must be hatched in eggs.  This means that players need to buy some incubators and go out walking.  Its been pretty cold in a lot of places recently so its hard to say how much enthusiasm for the game this will gin up.

Make sure you pick up the free one hatch Incubators during the holiday week event.

Eggs for Togepi and Pichu have a higher chance of being released during the holiday event.

Pokemon Christmas Pictures:
I love fun Pokemon art.  Here is some cool Christmas /Winter/ Holiday themed art I've stumbled upon. Some of these are very cool.