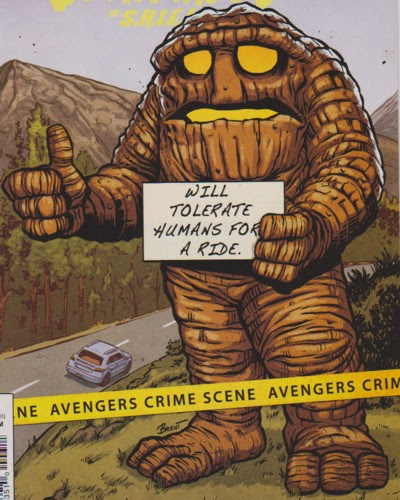 Quotes:  "I'm not a monkey.  Im a Mentelleronite."  Orrgo responding to the Thing

Orrgo is a very powerful extraterrestrial who has attempted to conquer Earth numerous times.

Origin:
On the other side of the universe a group of highly advanced aliens called Mentelleronites are discussing the possibility of conquering Earth.  One cocky Mentelloronite named Orrgo suggest that he alone can conquer the planet to prove his greatness.  In an instant he teleports across the universe and lands on Earth near a circus in North America.

Orrgo is able to very quickly conquer the planet by hypnotically controlling all of Earth's population.  Put at ease with how easily he conquered Earth, Orrgo returned to the circus where he initially appeared and went to sleep.  Humans across the planet stopped doing their normal jobs as they were under Orrgo's mind control.  This included the workers at the Circus where Orrgo was sleeping.  A Gorilla named Jojo became angry that he wasn't being fed and realized the cause was Orrgo.  The Gorilla began beating on Orrgo eventually killing him.  The death of Orrgo was felt by his fellow Mentelleronites who decided attacking Earth was too risky.

Defenders and the Headmen
Orrgo is summoned by a group of criminal masterminds called the Headmen.  The Headmen had joined forces with the AIM leader known as MODOK in a new bid to conquer the world.  The group had gained control of a statue called the God from Beyond.  This statue granted the group the ability summon beings and to control them.  The Headmen put Orrgo under their control.

Using Orrgo's powers the Headmen immediately began causing global havoc by causing volcanoes to erupt, cities to levitate, and massive fires to start.  As this begins the villains are interrupted by the part of the superhero team known as the Defenders.  The heroes Nighthawk, Valkyrie, and Hellcat are beaten in this first encounter.  Orrgo then hypnotizes Earth's population with the only people immune being the Defenders and the Headmen due to their contact with the Statue God from Beyond.  The rest of the Defenders join the fray including Doctor Strange, Namor, Hulk and Silver Surfer. However, Orrgo begins summoning a huge army of super villains to help fight off the heroes.  The newly arrived heroes hold of the super villain army.  Nighthawk manages to get hold of the God from Beyond statue and make Orrgo undo the damage he did.  He puts out the disasters and returns the super villains from where he had found them.  Doctor Strange ponders how the heroes might use the immense power of the God from Beyond statue for good.  Hellcat immediately dismisses him saying that any use of the power would violate free will, she then smashes the statue.

Orrgo is then freed of the statues control and ponders an attempt to conquer Earth.  Hellcat warns Orrgo that he is always defeated by the humans.  Orrgo decides that he will return to Earth once humans are extinct.

Orrgo is captured and made into an asset of SHIELD.  As part of SHIELD he has been part of two groups STAKE and the Howling Commandos to help defeat supernatural threats.  He later stumbles upon a conspiracy and is made into a prisoner at Pleasant Hill.  Dum Dum Dugan frees him and learns about the super human prison set up there.

I found some great art of Orrgo: