Fun Fact:  Groot while also a tree like alien does appear to have any relation to Moomba 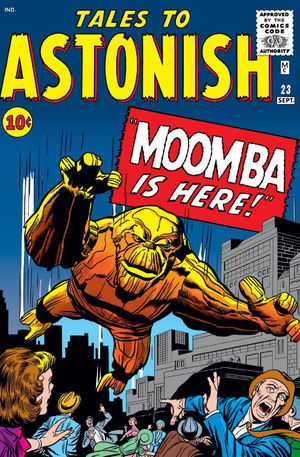 Moomba is a member of an unnamed alien race that came to Earth in the hopes of conquering the planet.  The race placed themselves all over the world and hid as what appeared to wooden statues.  One of the statues Moomba was found by a tribe in Africa.  All the other wooden statues waited for the day Moomba would give the call to start the invasion.

A big game hunter named Frank came to Africa hoping to get an impressive trophy and make some money.  However, when he gets to Africa he learns there is a bigger opportunity hunting for mysterious wooden statues that have become a craze.  He goes out to see if he can find any of the statues for himself.  He finds an immense statue but is startled when the begins to attack him.  This statue is Moomba and Moomba sends out the psionic call for the wooden statues to begin their assault on Earth.  Frank manages to flee from Moomba and finds a local shaman named Katu.  The shaman works up a special brew that emits fumes that is highly poisonous to Moomba.  Moomba flees along with all the wooden statues.

Before he leaves Earth, Moomba wipes everyone's minds clean of any references to him or the wooden statues.

Moomba was captured by monster hunter Elsa Bloodstone.  She imprisoned the creature inside Bloodstone Manner.  When the manner was attacked by Deadpool and Elektra, Elsa captured the pair and threw them into prison with Moomba.  The pair battled and injured the Moomba before escaping.

Magik and Shadowcat are attacked on Monster Isle by Moomba when they were searching for Bo.  Magik teleported the three away to safety in the Xavier school for higher learning.

Angela the Assassin of Asgard encountered the alien race of the wooden statues from which Moomba was from.  She first appears in Marvel universe on the planet ofMoombas  (Age of Ultron #10).  This was when came to the Marvel universe from the dimension of Heven.  She first meets Hank Pym while holding a severed of a Moomba and vowing revenge on whoever tore her from her world.


Powers:
Marvel Shop:
Toylab is a member of the Amazon Affiliate network and so we can offer you great deals like the ones recommend for you below:

I found some great art of Moomba: