The figures available in the series are:

Each figure comes with one component of the Juggernaut build-able figure which is a pretty massive figure once you have all of the pieces.

A closer look at the figures:

Wolverine is a natural place to start with this series as I believe this will be the most popular figure in the whole set.

The Wolverine figure includes some cool features including interchangeable hands and a butterfly movement chest meant for posing.   The figure articulates its arms very well to give Wolverine some furious, action poses.  The figure also has articulation in its abs allowing Wolverine to be posed in a leaning or prowling like pose.

The Wolverine figure has the blank white eyes that help make Wolverine look really angry.  The rest of the figures in the series have life like eyes but I'm happy they went with the plain white for Wolverine.  They did add some deep, wrinkles around Wolverine's eyes which make his face look even more angry.

The figure looks good in a standing position but definitely looks better in more actions poses that take use of the figures shoulder and ab movement.  You can really recreate a lot of Wolverine's iconic poses with this figure.


The figure is clean looking with straight lines.  It does not have much in the way of painted on details.  So no shadows, furry arms or unshaven face on Logan here.

Some have pointed out that when figure is standing straight up that Wolverine's kneck can look a little long.  You can see this in the picture below.  However, I think is a subtle effect and it goes away when Wolverine is put in a more crouched like position which seems to be what the figure was designed for.

This might be my favorite Wolverine pose with the figure.  To me this comes straight out of the Wolverine 90s cartoon series.

Kitty Pryde is an interesting character with her ability to move through walls however that power has always been hard to depict in a toy.  I think this is part of the reason why there have not been many Kitty Pryde toys in the past.  Without her power her costume is pretty vanilla, without much exciting going on.  That said Kitty is a very popular character and she has had a big role in recent X-Men comics as well as Guardians of The Galaxy with her burgeoning romantic relationship with Star Lord.

This figure kind of surprised me though because she looks really good even if her costume is vanilla.  The face of Kitty looks really good, very much like a real person.  The hair looks great with the bangs and pony tail.  Overall the effect is really pretty striking.  The eyes are neat and detailed as well.

The Kitty figure also comes with the character Lockheed who is the purple dragon.  This actually adds some spice to the set.  You can pose Lockheed on her kneck or make her hold him in her palm.

One thing about this Kitty Pryde is that she is pretty tall.  She is actually a slight bit taller than Rogue and in my head she should have been a little shorter than Rogue.

The Rogue figure is meant to capture her famous Jim Lee design of the 90s.  Which is my personal favorite costume for Rogue.  I just think she has the most swagger the way Jim drew her.

Like the other characters in the series she has amazingly sculped hair that is both detailed and dramatic. The white streak that Rogue is famous for is clearly visible and well done.  The white streak blends well with brown hair in a natural looking way.  She also has a cool bandanna/headband that waves cooly to her side.

Rogue's face is very well done as well, looks very life like.  I think the eyes and cheek bone structures in all these figures are impressive but I think I like Rogues the best.

She also has Rogue's iconic bomber jacket that is fitting over the X-Men costume.  The jacket is very nicely detailed and really helps scream out that this is Rogue.

One cool added feature is that Rogue has an interchangeable ungloved hand.  This is pretty cool as you can show her reaching out to touch someone and use her power.

Rogue comes with a leg of the Juggernaut Build-A-Figure. 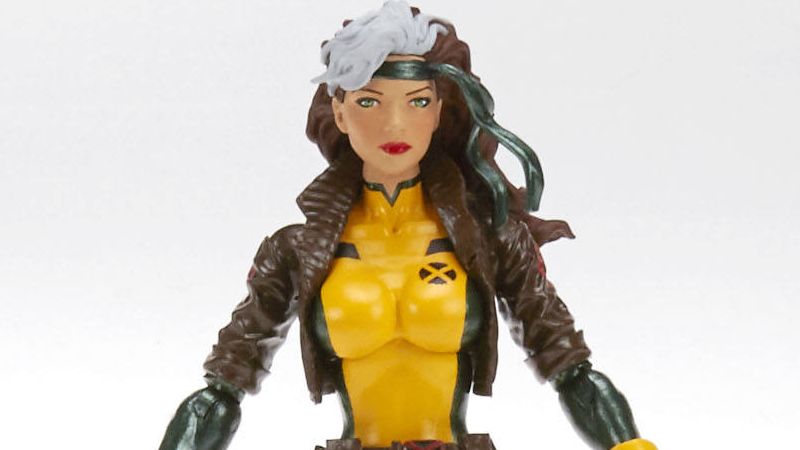 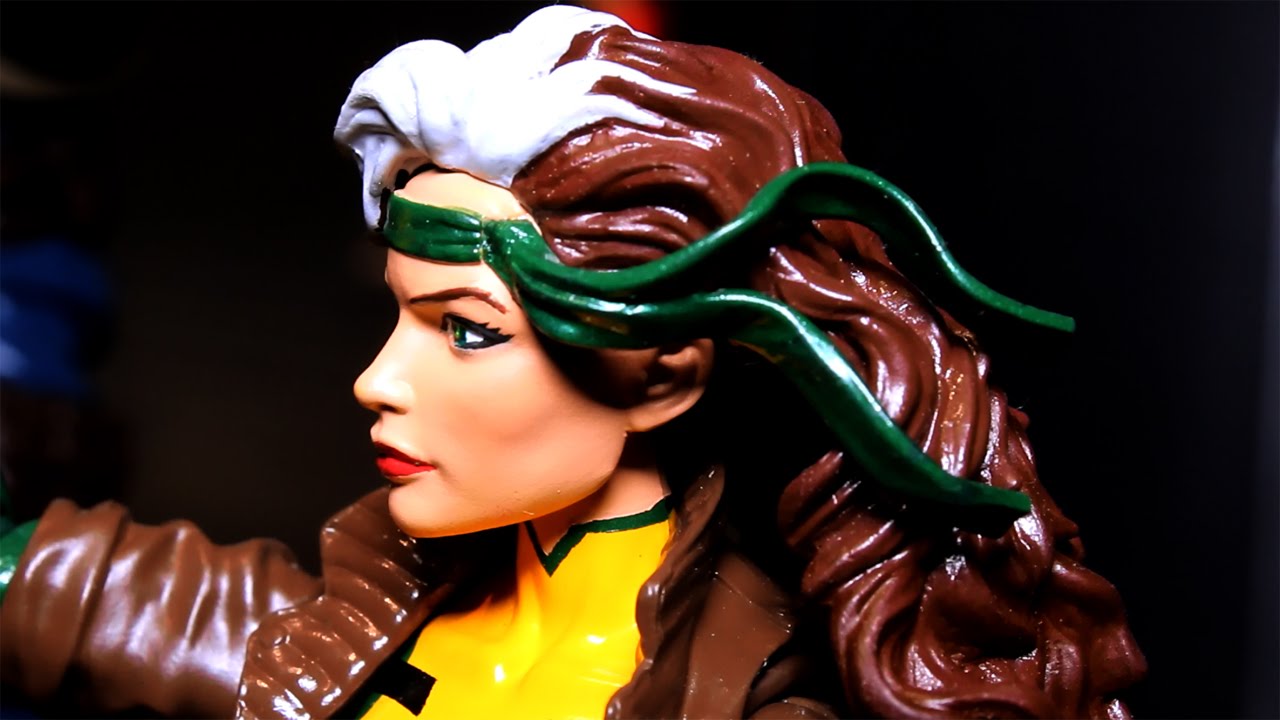 This is not my most favorite figure in this set by any means but I do think she has a really different face, it looks life like.  The hair is also very detailed and dramatic and the poses you can make with Phoenix are very epic.

The Phoenix figure comes with the chest of the Juggernaut Build-A-Figure.

The Deadpool figure comes with most most and by far the most fun accessories of any figure in the set.  The accessories include of all things a taco, which I think is awesome.  My taco eating shirt is a Deadpool shirt so that makes perfect sense to me.

IceMan comes with the arm of the Juggernaut Build-A-Figure.

Cable has a really angry and life like face with cool detailed eyes.  His face overall looks really bad ass and cool.  You can see the scars and cyborgnetic parts of his face meeting the flesh and it just give off a really tough and cool effect.

His body is covered in pockets and straps which really make him look like soldier.

He comes with massive guns and a chain of ammo.

The most striking part of the Cable figure might his metal arm.  Its just full of metallic details and the color used really pops.  The hand on the metal arm is covered with a glove that also gives off a very realistic vibe.


Cable comes with the waist of the Juggernaut Build-A-Figure. Havok is not the top of a list for a figure I want but I have to say that this figure is very cool. The light effects that slip over his hands really pop, especially in a dark back ground with a bit of a back light.


Havok comes with the leg of the Juggernaut Build-A-Figure.

Check out the Marvel shop up above.  It is designed to pull Marvel Legend figure deals directly from Amazon.