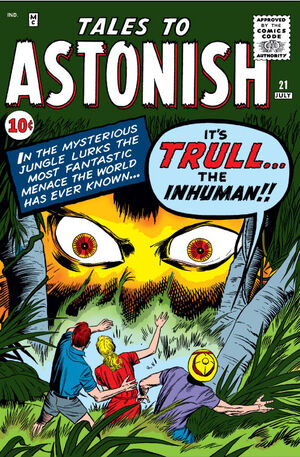 Who is Trull - Marvel Monster

Trull the Inhuman is an alien monster who wants to conquer Earth.  He is a mind that is capable of taking over machinery and using it as a body.  He appeared in early Marvel monster stories he later became a villain of the hero Ghost Rider.

Trull is an alien of unknown origins and traveling by Earth when his ship has mechanical problems.  The spaceship's anti-magnetic reactors go out and the ship plummets to Earth and crashes in the forests of Africa.  In the crash Trull's physical body is killed but his mind is able to leave his body and go out in search of a new host.  He finds an experimental steam shovel and takes the local construction crew at the site hostage.  While Trull takes note of his circumstance and begins to build plans to take over the world.   One of the construction workers sneakily calls over an elephant he helped earlier.  The elephant smashes the steam shovel Trull is inhabiting.  Trull's consciousness leaves the ruined shovel then take off into the African jungle searching for a new body to inhabit.

At some point Trull rediscovers another Steam Shovel to inhabit.

Trull reappears as a villain of Ghost Rider.  The villains Deacon and Blackout recruited Trull along with Orb, Madcap, Big Wheel, Scarecrow, and Vengeance to kill Johnny Blaze / Ghost Rider.  The group called themselves the Ghost Rider Assassination League.


Ghost Rider is riding to a heaven portal when he encounters Trull.  He promptly throws Trull into a gravel pit and then smashes him with a tree trunk destroying his steam shovel body.  Trull jumps around from machine to machine in the construction site.  However, each body he takes over is promptly destroyed by Ghost Rider.  Trull makes one last gloating statement from a chainsaw that:

"WHERE EVER THERE ARE MACHINES, I WILL BE READY TO--"

Ghost  Rider stomped on the chainsaw and destroyed the last vessel nearby that Trull was able to inhabit.