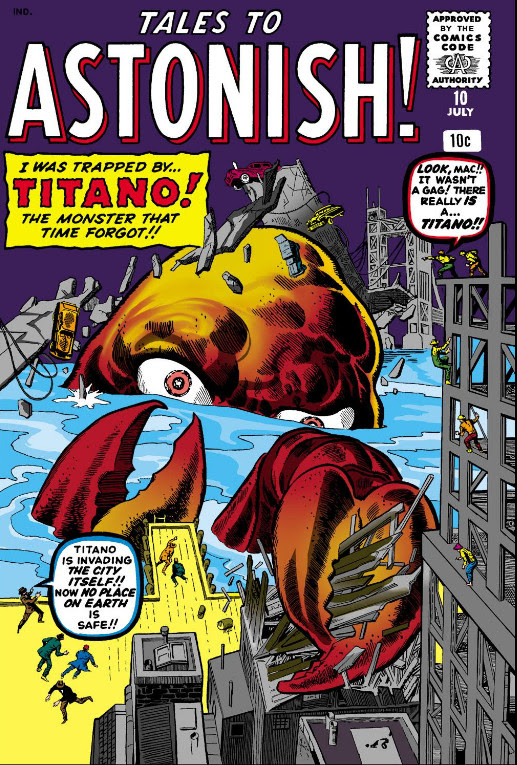 Who is Titano - Marvel Monster

Titano is a giant crab monster that appeared in early Marvel comics.  He is a possible monster that could appear in the 2017 Marvel event Monsters Unleashed.

Alias:  The Monster that Time forgot,

Titano is an ancient crab monster that once terrorized the world but for unknown reasons went dormant.  When he suddenly awoke in the Pacific he immediately caused chaos and destruction.

The United States Navy began receiving bizarre reports of a giant crustacean that was terrorizing islands in the South Pacific.  The destruction of the beast forces the Navy to take the reports of the monster seriously.  The islanders began to tell the US military that they suspected the creature was a legendary beast called Titano.  The further added that "When Titano rises from the deep, let the whole world beware."  A special mission to destroy Titano is assigned to Commander Hartnell and his Submarine vessel.  He is ordered to use any means necessary to destroy Titano.

Hartnell tracks down Titano and has several battles with the massive beast.  In the early encounters Titano gets the better of the US Navy Submarine.  Hartnell hatches a plan to rid the world of Titano forever.  He gets Titano to follow his ship into the Artic ocean.  There he tricks Titano into going between two glaciers where he traps himself.