Who is Tiger's Beautiful Daughter?

Tiger's Beautiful Daughter is a Marvel character known for being a beautiful and highly deadly member of the Immortal Weapons.  As an Immortal Weapon she is on of the greatest martial artists in the world with added on power.  She has been both an ally and an enemy of Iron Fist.


We cover our faces. Not because we are ashamed of our beauty but because we want our enemies to focus on something else,..the feel of our hot steel in their burning guts.  (Tiger's Beautiful Daughter) 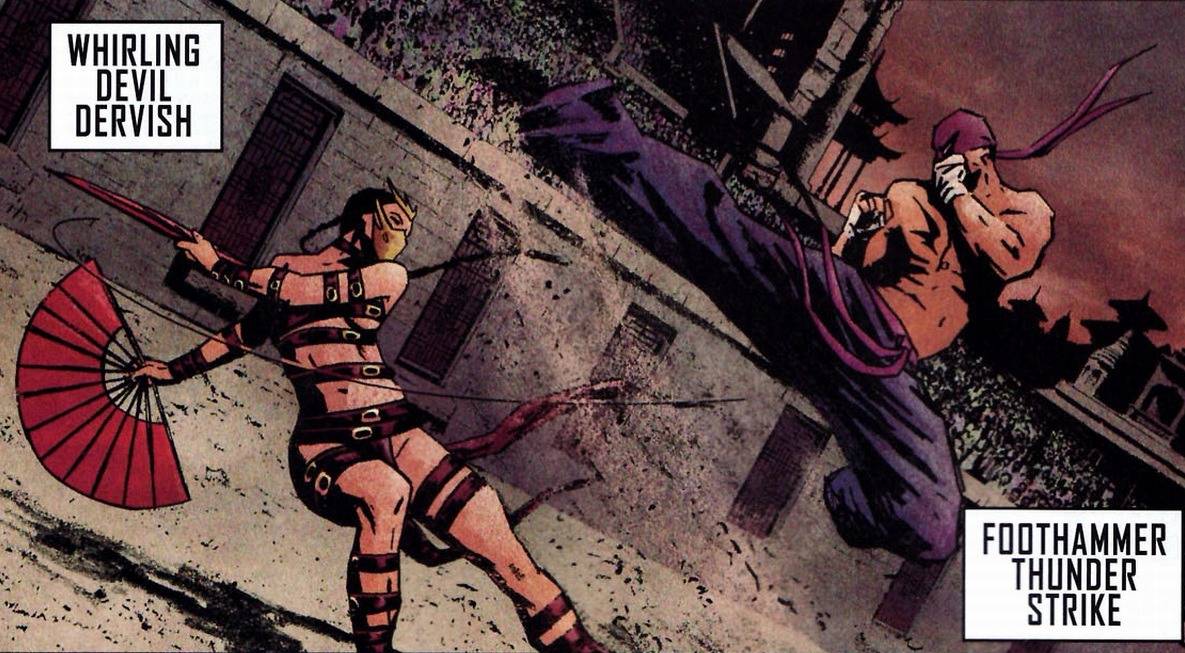 Li Hua also known as Tiger's Beautiful Daughter is one of seven Immortal Weapons who represents the city of Tiger Island. She is the Daughter of Tiger Empress and Tiger Warrior.  Like the other Immortal Weapons she is a fierce martial artist and also has the ability to harness and use her chi for various effects.

Li Hua grew up on a quiet island were women only engaged in parties and crafts.  The men like her father would go off and fight every few years and return with great stories.  Li Hua showed only disdain for the lifestyle of the women and longed for the adventures of her father, Tiger Warrior's stories.  When Li Hua slept she was often greeted by her dead mother who would train her how to fight.  Li Hua initially believed these dreams were only dreams and nothing more.  However, it was soon revealed that she was actually learning advanced martial arts from her mother in the dreams.

An army attacked Tiger Island and Li Hua is startled to see all the men of her village flee rather than fight.  Instead, of running away she engages the army and begins to defeat many soldiers with the martial arts she learned in the dreams.  Looking down at many defeated foes she realizes that something is not right and confronts her father.

Her father tells her the truth.  The warriors of Tiger Island have long been women, but when the island had been conquered one of the requirements was for their to be no more female warriors.  The Tiger Island's female warriors had nearly been decimated so there were few adult women left who knew the truth and could carry on the old ways.  Li Hua's mother was the greatest warrior of their people and known as Tiger Empress but she had died during the battle.  In order to keep the women in the dark of their true place in their society the men pretended to be warriors.  This meant the men had to fake going off to war every few years and a new docile life style was forced upon the women.  Infuriated at the lies she had been told, Li Hua began organizing the women of the village into a fighting force.  They create weapons out of any tool they can find and craft fearsome masks.  After a brutal battle the women defeat the army and then begin to fully retake all of the Tiger lands.

Tiger's Beautiful Daughter is initially reluctant to help the other champions fight off an attack from Hydra.  She joins when she decides that the attack could imperil her own city.  She joins in the attack on the newly found 8th City of Demons.  She is captured and tortured there.  It is the Tiger's Beautiful Daughter that manages to escape by distracting and taking down a guard.  She frees the other Immortal Weapons and they fight their way out of the city.

During Fear it Self the Immortal Weapons help close the gate to Eighth City.

Can use her chi to enhance her speed and accuracy.

She also been shown to have some of the best mediation skills of all of the immortal weapons.  She is shown meditating for 13 days.

Uses a variety of weapons but primarily fans and spears.

MCU:
There has not yet been any sign of Tiger's Beautiful Daughter in the Marvel Cinematic Universe.