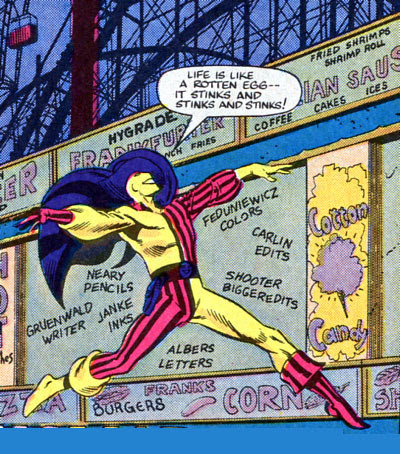 Madcap is a Marvel villain who is known for battles with various heroes including Captain America, Ghost Rider, She-Hulk, The Thunderbolts and Daredevil.  He has emerged as a nemesis of the hero Deadpool.

Orgins:
On a church field trip a bus is hit by a tanker truck.  Nearly everyone in the bus is killed but one of the boys on the bus was thrown away from accident.  The tanker truck was carrying an experimental chemical called Compound X07 that was being developed by A.I.M. as human healing regenerative formula.  The chemical spilled on the ground and boy laid in pool of chemicals (Compound X07 included) unconscious for hours.  The boy awoke to find that he was miraculously still alive but everyone he had ever loved was dead from the accident.  Feeling immense survivors guilt he attempted to commit suicide by throwing himself in front of an oncoming car.  To his surprise he felt no pain and his body quickly regenerated from the injuries from the car.  Seeing the sick irony in wanting to die but being able to do so he quickly descended into a nihilistic form of madness.  His world view shifted from an orderly religious one into a chaotic belief that all things occur without reason or purpose. He decided that the highest form of purposed that could be found in the universe was amusement.

He also found that anyone who looked him the eyes would also go insane.  He began finding this act entertaining.


He bout a cheap costume and a bubble gum and set out with his new powers to terrorize the world for his own personal entertainment.

She-Hulk once battle Madcap and was continually driven mad and forced to fight for her sanity.  Even when her mind returned to reality she was unable to rid herself of Madcap an he continually healed from any blow she delivered on him.  He finally left after She-Hulk tore up a comicbook the pair were drawn together to in.

Deadpool intrigues Madcap because he is the only person able to resist Madcap's insanity stare. Madcap openly wonders if Deadpool is more sane than other people or if Deadpool is insane already.
Thor intervenes in a battle between the pair and fire a lightning bolt at both.  Deadpool regenerates from the lightning but Madcap does not.  Madcap though seems to have regenerated with-inside Deadpool and his conscious appears as a series of white text blocks.  Deadpool is unable to get Madcap out of his head.

Finally Deadpool is pulverized once again and this time regenerates as both Deadpool and Madcap seperately.

Deadpool starts a group called Mercs for Money.  Madcap joins the group even though not wanted.  The group is unable to force the madman away.  Madcap takes part in some missions but does dismally.  Deadpool discovers that Madcap is going around the world impersonating Deadpool and forcing innocent people to kill themselves by driving them crazy.  Deadpool and Massacre then confront Madcap.  Madcap threatens to use a special molecule destabilizing weapon of Chitauri origin on Deadpool but Massacre continually hacks of Madcap's limps as they regenerate.  Finally, Madcap is able to regenerate but decides it would be fun to test the molecule destabilizing weapon on himself and does so.  He seemingly disappears.


Powers:
Advanced healing factor - Madcap can recover from almost anything.  The limits of this power are not fully understood.

Insanity Stare - When Madcap stares a person in the eye he causes that person to go crazy.

Madness / Genius - Madcap is insane making him very unpredictable.  He has shown signs of strategic and tactical genius despite being insane.


MCU:
Madcap has yet to appear in the MCU or the Fox mutant universe.

Email ThisBlogThis!Share to TwitterShare to FacebookShare to Pinterest
Labels: #ComicNews, #Comics, #deadpool, #Marvel, A WHOIS for today Who Is Madcap?