Who is Vandoom - Marvel Monster

Vandoom is a fearsome monster that was initially a the star attraction at a wax museum.  Through bizarre circumstances he came alive and began terrorizing the world. 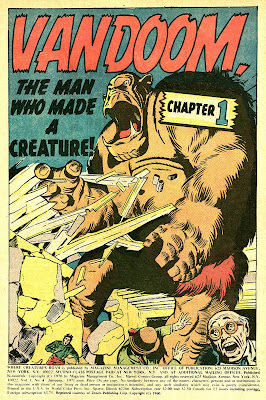 The story begins in a remote village in Transylvanian is a wax museum called Vandoom.

Ludwig Vandoom has inherited the a wax museum from his father.  The was museum houses many supernatural wax statue attractions of monsters like the Werewolf, Dracula, the Mummy and Frankenstein.  The classic monsters statues have become dull to tourists and the local villagers and so business at the wax museum is waning.  Ludwig's wife is forced to work as a seamstress to pay the bills.  Ludwig concocts a plan to bring in new business to the museum.  He decides to create a massive new terrifying monster.


I shall build a new Wax monster - - One that will attract people from all over the world! How - ever there are no great new monsters in literature - - so I shall create my own.


Ludwig then sets out to make a massive wax monster.  He is not satisfied with a life sized monsters and begins to build a monster who's head will literally extend beyond that of the museum's roof.  Villagers begin to take notice of Ludwig's obsessive work habits and worry what he is doing at night with a light on.  When Ludwig cuts a hole in the museum's roof for the growing body villagers begin to freak out and ask Ludwig questions.  He refuses to answer any questions in the hopes that this creates more fear and wonder at what he is doing.  The terror of villagers reached an apex when spying inside the museum they caught sight of Ludwig Vandoom's hideous creation.  They began to form committees in order to shut down the project.  They were unsuccessful as Ludwig was building the attraction on his own property.

As Ludwig prepared to unveil his creation a lightning bolt struck and somehow turned the wax structure into a living breathing monster.  The monster tore through the museum and began to wreak havoc in the village.  The villagers attempt to attack the creature but are pushed back.  Then in a weird twist of fate.....aliens attack the village.  The aliens see the villagers as weak and think they can easily take over however they are then confronted by Vandoom's monsters who begins to crush them.  The aliens flee but not before exhausting the wax monster.  The villagers bury Vandoom monsters body in honor.  They then ask Ludwig to build another replica of the monster and this time they promise not to fight the project.  The new monster is built and is a great success people come from miles and miles to see the wax beast who defeated the aliens.  On story nights though Ludwig still worries about another stray lightning bolt that could make his monster come to life.

Vandoom appears a couple more times.  He appears as a monster in Peter Parker's dreams and is shown in the collection of the Collector.

Mole Man at one point raids the Collectors museum and frees the monsters there.  These monsters were beaten back the heroes Beast, Hulk, Giant-Man and the Thing.  Vandoom was beaten by the heroes and put in a prison in the Negative Zone.

Vandoom was freed from the Negative Zone and brought to the Monster Isles.  On the monster isles he was once again brought under the control of Mole Man and used to attack cities throughout the world.  This plot was foiled by the Fantastic Four.