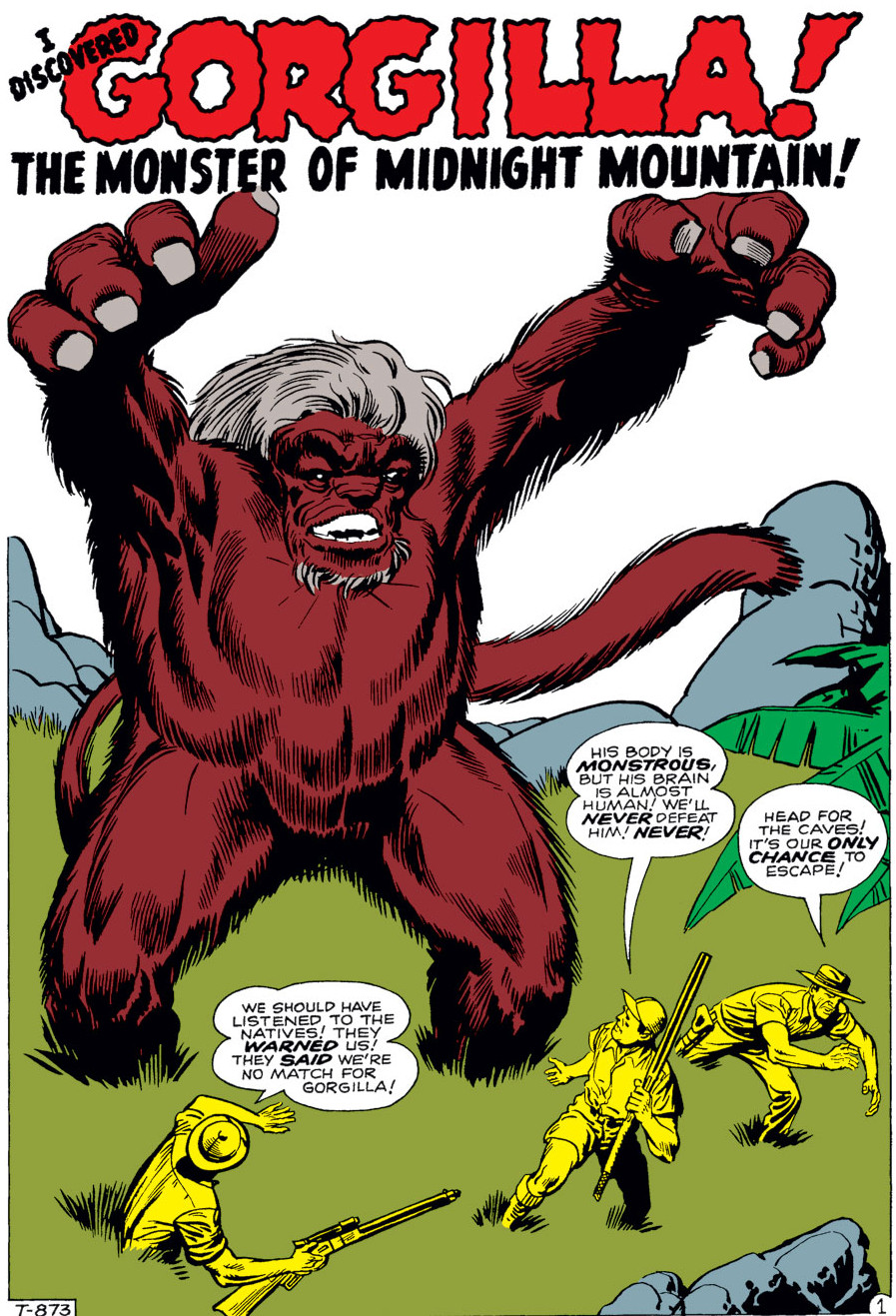 Who is Gorgilla - Marvel Monster

Gorgilla is a Marvel monster that appeared on Borneo.  He is a giant Ape or Gorilla with human like characteristics.  Gorgilla was originally worshiped as a god on Borneo before being discovered by modern civilization.  The characters shares some similarities with the classic monster King Kong.

The origins of Gorgilla are murky but he is speculated to be an experiment of the ancient Deviant race.

Scientists traced the humanities missing link to the island of Borneo.  The scientists collect the resources to launch expedition to the exotic island to locate physical remains of the missing link.  On the island the scientists encounter locals who recognize the creature the scientists are seeking.  The locals call the creature the "God of Vengeance who lives on Midnight Mountain."  The locals also tell the scientists that the area where the creature lives is untouched by time.  The shocked scientists set off toward the area to confirm the locals stories and see this god of vengeance for themselves.  Inland they encounter the fierce Gorgilla who attacks the scientists.  Before Gorgilla can do much damage to the frightened scientists a giant Tyranasaurus Rex appears who attacks the group.  Gorgilla defends the humans from the Dinosaur.  Gorgilla defeats the Tyranasaurus Rex back and then collapses.  The scientists believe they could capture Gorgilla in his weakened state but instead decide to honor their defender and leave him in peace.

The Deviant warlord Kro managed to take control of Gorgilla using a mind control device and loaded him on a ship for New York City.  There Gorgilla esapes and while not trying to be hostile he is attacked by terrified humans.  He flees into the sewers before eventually scaling the Statue of Liberty before being shot dead.  People later realize that he was simply trying to communicate with them and not hostile at all.

Gorgilla appears alive and well in a X-Men story on the Monster Isle.  How he survived the attack at the Statue of Liberty is not explained.

Gorgilla goes on a time traveling adventure with Fantastic Four's Mister Fantastic whom Gorgilla refers to as"Man in the Blue Pajamas" and Zarko the Tomorrow Man.  He prevents John Wilkes Boothe from killing Abraham Lincoln and in doing so creates an alternative time line where he himself is President of the United States.  Eventually, the time line is set right by Mister Fantastic.

Gorgilla appears as part of Mister Fantastic's program to reform monsters and works at the Baxter Building.  There he helps prevent a microscopic warlord from conquering the world while working with other reformed monsters in the team called the Monstrous Four.