Who is The Living Statue 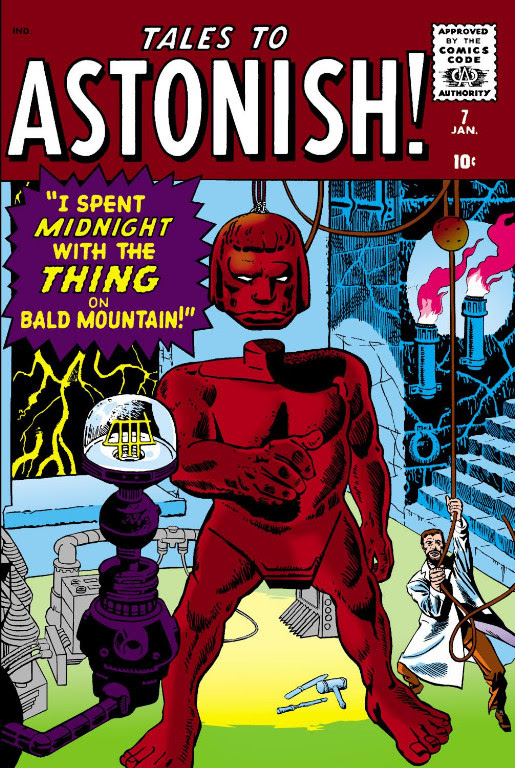 The Living Statue is a monster that appeared in early Marvel comics in the early 1960s.  He appeared as the villain in two issues of Tales to Astonish.  This post is part of the Toylab Marvel Monster series that focuses on old Marvel Monsters in preparation for the 2017 Marvel Comic event Monsters Unleashed.

Name/Alias: The Living Statue/  The Thing from Bald Mountain

The Living Statue first appears in a story called "I spent Midnight with the Monster from Bald Mountain".  The story is set in a castle where a sculptor is working on two massive projects.

The sculptor builds two massive statues one representing "Evil" and one representing "Good."  After he is finished a lighting bolt strikes the building he is working in and the "Evil" Statue comes to life.  This statue begins to thrash and chase after the sculptor and eventually pins him down.  Just before he is about to be struck down the sculptor is saved by the "Good" statue who has now come to life.  This "Good" statue knocks the other off a ravine.  Both statues tumble down to their seeming doom.  The stunned sculpture believes both of the statues are dead.  He does not understand what brought the statues to life but believes the evil one was triggered by lightning.  The source of the Good one's animation remains a mystery.

The first story ends with the statue seemingly killed.  However, the evil statue somehow survives.  He then goes to America in a plan to take over the world.  The statue needs to rest after getting to America and seeks solitude in a large metal cave.  Unknown to the giant he has entered a rocket at Cape Canaveral Florida and is launched into space.  The rocket is said to be headed toward the farthest reaches of the solar system.

The living statue was never heard from again.