Review of Watchmen by Sir Kent 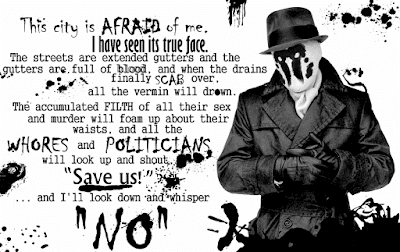 In these times of the debate over not only should movies based on comic books be rated R but, if so, how “Adult” should they be? I thought I would use a movie that I actually love and own but received mixed reactions from fans and critic's. Of course, I picked this movie as well because it was directed by one of the most polarizing directors of all time! According to your comments regarding my last
GUILTY PLEASURE post. Welcome to the third installment and this week's GUILTY PLEASURE movie will be

The Watchmen were created in 1986 by
Allan Moore who, if you know anything about his work, absolutely LOVE'S tackling issues that make people uncomfortable. (This is the same guy who wrote The Killing Joke.) He came up with the idea of The Watchmen because he wanted to write about what would happen in society if there were actual superheroes among us. Even their name, loosely translated from Latin means “Who watches The Watchmen?”. He also had certain political aspects for writing this series as well that, I don't care to address.

As you ALL know, this happens A LOT in the world of comics. Where a writer or creator will create a character VERY similar to another companies. Moore wasn't the first but, he admittedly followed in the footsteps of others. In case you're wondering, these characters are

The big screen adaptation that came out in 2009 was directed by then, much embattled
Zack Snyder. (I can hear you f Beepin’ HATER'S out there screaming “C’MON MAN!”). I say “Embattled” because, this was after he did a reboot of DAWN OF THE DEAD (2004) and 300 (2006). Both of which received praise and MUCH hate! Some people even said that he didn't deserve to be trusted with another big budget film.

The Watchmen told the story of a group of hero’s that were set in an alternate 80’s Universe. A time when the world was on the brink of nuclear war and society was calling for a superhero registry. For no matter how much good they did, most still had a problem with hero's operating outside the law (Who watches The Watchmen?). ESPECIALLY when, even though most of them had no powers, the one that did, Dr. Manhattan (Played by
Billy Crudup) was nearly all-powerful.
Dr. Manhattan can become intangible, control his size, has thought control, can teleport, survive the vacuum of space, can control all matter oh, and did I mention MAKE PEOPLE EXPLODE WITH A SNAP OF HIS FINGERS???

He was the only member of the group that had actual super powers but, rarely used them. The other members of the group were seen as killers just as much as they were hero's. Let's start with the person this dark and bloody tale revolves around. The Comedian (Played wonderfully by
Jeffery Dean Morgan) is a Vietnam Vet who should be locked up for war crimes? “Why” you may ask? Well other than happily admitting that he killed women and children during the war, he was a rapist and complete psychopath as well!

So OF COURSE he would be GREAT for carrying out government sanctioned black ops. Remember how some people say there was a second shooter at the JFK assassination? The Comedian saw the world as one big joke and his actions to be the punchline. However, he did stumble upon a plan that was so diabolical that it brought even his twisted soul to tears. It also brought on his murder.

Which in turn brought in an investigation by fellow Watchmen
Rorschach (Played by Jackie Earle Haley). Rorschach was a brilliant detective, boxer,
street-brawler and borderline psychopath. He ONLY saw the world in black and white and if you crossed him, you could easily end up thrown out a window, down an elevator shaft or hacked to death with a meat cleaver! He's not AS bad as
The Comedian but, he's zip code is adjacent. I am going to yell SPOILER ALERT now.

Even though this movie is 7 year's old, a few of you may not have seen it so skip this next  few paragraphs.

In the movie, a little girl is kidnapped, raped, killed and fed to some dog's. Rorschach trace's this muthufBeepa to his house where he finds the poor little girls underwear and then bits of her clothing in the yard by the dog's. He kill's the dog's and waits for this F'Beepin’ F'beeper to get home. He then disarms him, whoops his ass and cuff's him to his oven. The guy confesses and asks to be taken in.

Instead, Rorschach grabs a nearby meat cleaver and reduces the guy's skull to hamburger! I can clearly remember cheering when this happened in the theater and this brings me to the deeper point of such movies that shine a light in society as a whole. There are just certain people who, through their actions don't deserve to live. No life sentence, no lethal injection, just a trail and a horrible death. Should movies like this address such things? Should a movie based in a comic have such mature tones?

OKAY. YOU CAN START READING FROM HERE

During his investigation, Rorschach discovers a plan that not only plans to kill off all current hero's but discredit former hero's as well. However, that is just the start. As the story rolls on, it is discovered that this plan also involves driving
Dr. Manhattan from the planet, using his powers as a means to carry out this diabolical plan AND set him up for the entire thing! Now THAT'S what I call a “BALLA” plan!

With the exception of Dr. Manhattan 4 out of the 6 members of this team have ABSOLUTELY NO BUSINESS running around fighting the good fight! But this also begs the question, is our perception of hero's TOO good? Have we just come to expect them to always take the high ground and do the right thing? Is that even possible in the world anymore? That's why I personally say that there is definitely a market for movies like this.

Maybe Zack Snyder is one of the few directors who can currently put an adult spin on movies like this. Maybe he sees something that is needed in these reimaginings. I believe that adults can identify, discuss and agree with a lot of the visceral brutally that happens in this movie. So what are your thoughts? Will the debate over R-Rated movies rage on or, thanks to the success of The Watchmen and recently Deadpool, have they become the norm? How far should they go?﻿

Related Toylab Film Store
Toylab is an Amazon affiliate and is able to directly to link our site to these amazing Amazon deals.