Monsters Unleashed is a Marvel Comic event in 2017 that will focus on massive monsters battling the heroes of the Marvel Universe in one giant free for all that may leave NO ONE standing.


Listen to "Diggin into Monsters Unleashed with Marvel Matt" on Spreaker.

Promotion:
Marvel is preparing some massive promotional items to gin up excitement of Monsters Unleashed.  The first item to hit will be on January 4th when Marvel will be giving out free copies of the  Monsters Unleashed Sampler that includes 40 pages of content including preview pages for the main Monsters Unleashed series, as well character profiles.  I will post pictures of this when it comes up.  This is a free promotion that will be at participating retailers.

Marvel has released some new information on how Monster Unleashed will be promoted.  Monsters Unleashed #1 is due out on January 18, 2017.  Marvel is offering retailers incentives to launch the series with a full on Monster Bash.  They are providing promotional post cards, a variant cover from Art Adams and a Monsters Unleashed Sketch Pad that is part coloring book and part sketch pad.  I don't think I have ever seen a release of a sketch pad with an event so that is very cool.  I have seen cool flyers and posters which I think is what the postcards will fall into.

News and Info:
Monsters Unleashed live chat with the creators of the series


Heroes:
The Series will feature almost all heroes in various ways with multiple super teams like the Avengers and Guardians of the Galaxy help fight the monsters.  Creator of the series Cullen Bunn has described the  Monsters Unleashed event as an all hands on deck for the heroes.  Many of the heroes will be forced to put old beefs aside and join forces with those they may not like to help defeat the massive and immediate threat of the monsters.  While almost all heroes will be featured here and there, the series will be seen through a few important POV characters.


Kid Kaiju - It is possible that the entire event relates in some way to the mysterious powers of Kid Kaiju.

Riri Williams / Iron Heart - Riri is said to be heavily featured in the series.


Lunella / Moongirl - Moongirl is now tied to the big Monster Devil Dinosaur.  Could her powers also be useful against the monsters coming in Monsters Unleashed?


Monsters:
Marvel has many monsters some with origins that go back prior to publisher having Super Hero stories. 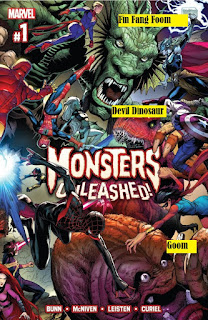 Marvel is also going to introduce some new giant monsters for the event.  Here are some who have been promoted by the company and the creator who designed them.  The promotional images where done in a trading card like format that highlights each monsters powers.


Why Monsters Unleashed will be Awesome:

What has caught my eye is that in 2017 Marvel is going to have a massive event called MONSTERS UNLEASHED.  What is immediately cool about the name is that I have not heard it before.  It is not the 2nd, 3rd of 4th Secret Wars but something new, something HUGE!!!!!!!!

The Monster Unleashed team assembled by Marvel is pretty awesome.  The writing will be done by Cullen Bunn and will star artists including Adam Kubert, Greg Land, Salvador Larroca, Steve McNiven, and Leinil Yu.  I really like Cullen Bunn he is a writer you may know from Deadpool Kills the Marvel Universe which was amazing.  I am excited to see what he does here and hope he can inject new life into the Marvel comic universe.

The idea of Monsters unleashed is pretty simple.  Its Marvel's version of Pacific Rim or of Godzilla.  What will make it fresh though is that Marvel has created many great Monsters over the years but most of them have sat for years in the dust bins of history.  This is a chance for many of these great monsters to get their day in the sun again.

There are also new Monsters to use and also a lot of influence from stuff like Godzilla in Japan.  One of my requests for the series is that Tokyo needs to get some action!  Come on that just seems necessary in the huge Monster Genre.

It should also be fun to see heroes take on these massive monsters.  Instead of battling super villains, evil organizations or each other we get to see our heroes test their might against an army of epic Monsters.  Artistically i see that series will open up great opportunities for huge slash pages featuring huge amounts of heroes, monsters and carnage.

Which Monsters will show up?  Well let me be clear Marvel has a TON and I do mean a TON of Monsters.  Prior to Marvel getting into the super heroes gig in the 1960s with Fantastic Four it was focus on horror books and many of those books had monsters.  Some characters like Groot debuted in this time period and were revamped.  However, many many monsters from that time have only made brief appearances.since then.  There are a ton of these guys and a lot of them are different than things we see today.

The Toylab Blogging Family is excited about this event! As preparation for the Monsters Unleashed event Toylab is going to have its own MARVEL MONSTERS week in October that will feature profiles of many of Marvel's best monsters.  I hope you continue to stop by this page as we update it with more Monsters Unleashed News and Marvel Monster Profiles.


Pictures of Covers
Fun task Monster Unleashed is going to feature huge splash pages full of heroes and monsters.  How many Monsters can you spot and name from the pictures below?