Let's be clear. The main lesson learned from this movie is YOU DON'T BREAK INTO THE FUTURE CABLE'S HOUSE! The term “The one with whom NOT to F'Beep” was realized nearly immediately by these three dumbfBeeps!
DON'T BREATH
is advertised as a “Horror” suspense thriller. But....IT IS NOT A HORROR MOVIE!


This movie is the very definition of a suspenseful thriller. It is nearly perfect in its delivery and I have no shame in admitting during lots of the scenes, I found myself holding my breath as well! Director
Fede Alvarez's attempt at depicting Detroit was a good attempt. With the exception of a few major landmarks, the movie is mainly shot in Hungary. Although, there is a mention of the blind man (Played by Stephen Lang) being the only guy living on this street for blocks around.

The fact is that in Detroit right now, there are entire blocks where there is only one occupied house which played perfectly for this movie. A movie filled with only one redeemable soul. The rest of them are all pretty much f'BEEPed! The story revolves around three kids who are into breaking and entering homes. THIS is one of the two problems I had with this movie.

#1 There is NO WAY a trio of white kids would be driving around Detroit casing house's! In certain neighborhood's, they would be killed! The second was with one of the main characters “Money” (Played by Daniel Zovatto). SERIOUSLY dude? Corn rows? I was happy when the blind man killed his ass!

Alex (Played by Dylan Minnette) has a father who works for a security company that monitors home security systems. He breaks into his father's office for information on which houses to hit. There you go, turd #1. You put your father's livelihood at risk because you're in love with a girl. Turd #2 I already mentioned, Money.

An Eminem wannabe that has never been above 8 mile and doesn't care who he has to hurt to get there. Plus, he's the reason that Alex is the third wheel on this team because he's shagging Rocky (Played by Jane Levy). Who is desperate to get away from her worthless, trailer trash mother and take...no SAVE her baby sister from this life. Of this entire cast, her reasons are the most pure. Upon completion of a job, Money gets word of a lonely old man who is sitting on $300,000 in his house! 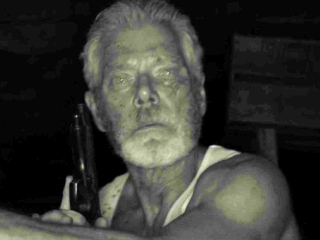 A score that would mean all of them getting out of Detroit...kinda like 60 percent of the population already has. There is, however, good news and bad news as they case the house. It turns out that the mark is a blind man. Which gives Rocky pause but the idea of easy money quickly squashes that. The TRULY bad news for them is that this guy is like STICK and DAREDEVIL combined and psychotic! After he kills Money in the house, it becomes a game of how quiet you can be to avoid this guy!

Did I mention the Rottweiler mix? Every blind man has a dog, right? His just happens to be referred to as a “Land Shark”. By NO MEANS is the blind man innocent either. During the course of the movie, you find out something about him that makes you actually pull for the kids who broke in.

If Hitchcock were alive today, he would rave about this movie. It's rolling camera angles where the blind man is feeling along walls and the kids are frozen RIGHT THERE in fear, holding their breath is terrifying! The basement scene was a bit unnerving and I'm an asshole! All in all, I highly recommend this movie and give it a 9 out of 10 stars. PLEASE go see this movie before the remake of
THE MAGNIFICENT SEVEN hits. Which will officially start the fall movie season.

Movie Store:
Toylab is a member of Amazon's affiliate program so we can show cool Amazon products like these fine offerings.