Let me say that before I begin this review,maybe I went into it a little “Hangry”. I didn't do my usual routine of app’s a pint and a shot before the movie. So maybe because of that, I wasn't as open minded as I should have been when I watched the movie. So please bare this fact in mind when I make the following comments.

I'm Sorry, I'm Sorry but lets get something out of the way.

Heath Ledger has simply ruined the role for anyone else. I don't know if it was because of the way this Joker was used in the movie.


Or is it just the simple fact that I don't buy into the hype behind Jared Leto. He reminds me of Johnny Manzel and we ALL see how that sh'BEEP turned out! I think this Joker's new look was TOO much. I have a personal hatred for gold teeth and the tattoo's were a bit much as well. Maybe, this new look was TOO aggressive for me?

Anyway, I was fBEEPin’ right about Jesse Eisenburg playing Alexander Luthor in BATMAN v. SUPERMAN and after seeing this movie, I was right again. But hey, I'm just saying. Now, with that out of the way, I will say that the movie did have a few “Flow” issues. By NO MEANS do these issues make this movie an abomination of FANTASTIC FOUR levels! As some people are trying to make it out to be.


Now before I get into the 'Flow” problems, let me lay the groundwork of the movie.


Amanda Waller (Played by the ever so talented Viola Davis) has a grim outlook for not only national security but, planetary security after the supposed death of Superman (They do a fantastic job of tying together the events of


Batman v. Superman AND the upcoming Justice League movies). The void that has been left by his death fills her heart with fear that the next, nearly all-powerful meta-human that comes along may not have our values or interest in mind. So she proposes the idea of assembling a team of meta-human’s and special ability convict's to do off-the-books operations in the name of national security. Basically she wants to use evil against evil, if the need should ever arise.


She gets her chance to field test her little happy team of psychopaths when an nearly all-powerful big bad in the form of the Enchantress decides that she is unhappy with the world in its current state. With the help of her brother, she plans to basically kill everybody on the planet and I don't know...drink tea? For what does one do after wiping out an entire planet's population? Catch up on your HULU? Finally knock out that NETFLIX queue? Read...like A LOT perhaps? I think the undertone message in this movie is, at what point does a person become unredeemable? This point is never more evident than in the case of Floyd Lawton A.K.A. Deadshot (Played by Will Smith). His driving factor throughout the movie and in the comic is his daughter. He would do anything for her and because of her.


There are several characters in this movie that deserve more time and depth and I hope that behind this movie D.C. See's that. A lot of people complain that Lawton is just Will Smith and I do agree 90% of the time. However, that other 10% he IS DEADSHOT! There's scene where they are about to retreat after being overwhelmed by sheer numbers. That is until Deadshot steps up and starts to reap souls.

THAT was a thing of fuckin’ BEAUTY! Another character that I think was lost in the sheer size if this movie was Katana (Played by Karen Fukuhara). I think a light needs to be shined on her back story ESPECIALLY how she came into ownership of a katana that possess the souls of its victim's? Why is she so trusted by Amanda Waller and Rick Flag? There's also another back story that D.C. should take advantage of.

What drives Rick Flag (Played by Joel Kinnaman)? How has he become the go to guy for such situations? I also truly enjoyed the way they finally “MANNED UP” George “Digger” Harkness A.K.A.

Captain Boomerang (Played by Jai Courtney). In the comics he is always running around with a wool hat and a f'BEEPin’ scarf and just looked silly. Here, he truly looks like an Australian brawler.


Granted, his role in the movie is comic relief and the occasional use of his boomerang’s but, I did appreciate the upgrade in his look. Although he did account for one of my “Flow” problems. At a point where all seems lost and Flag decides to set the squad free, Boomerang grabs an arm full of beer's and bolts. Then in the very next scene, he's like waiting for them outside the bar! WHAT DIRECTLY THE F'BEEP???


Did he realize that the buses weren't running or something? I think the cameos by Batman


(Ben Affleck) and The Flash (Ezra Miller) give fan's kind of a “Cherry on the top” reason to love this movie and geek out as well. This is a good time at the movies...with the exception of Leto.

BEST LINE of the film:

Deadshot has a 1911 on a C.O. that has been treating them horribly.


C.O.-"As soon as he shoots me, kill him and then delete my browser history!" 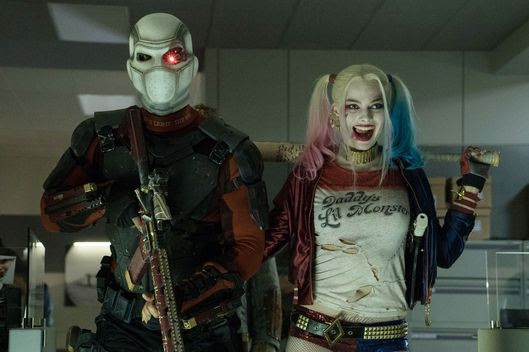