Strange Tales #130 -First Appearance of Kaecilius FROM THE VAULT 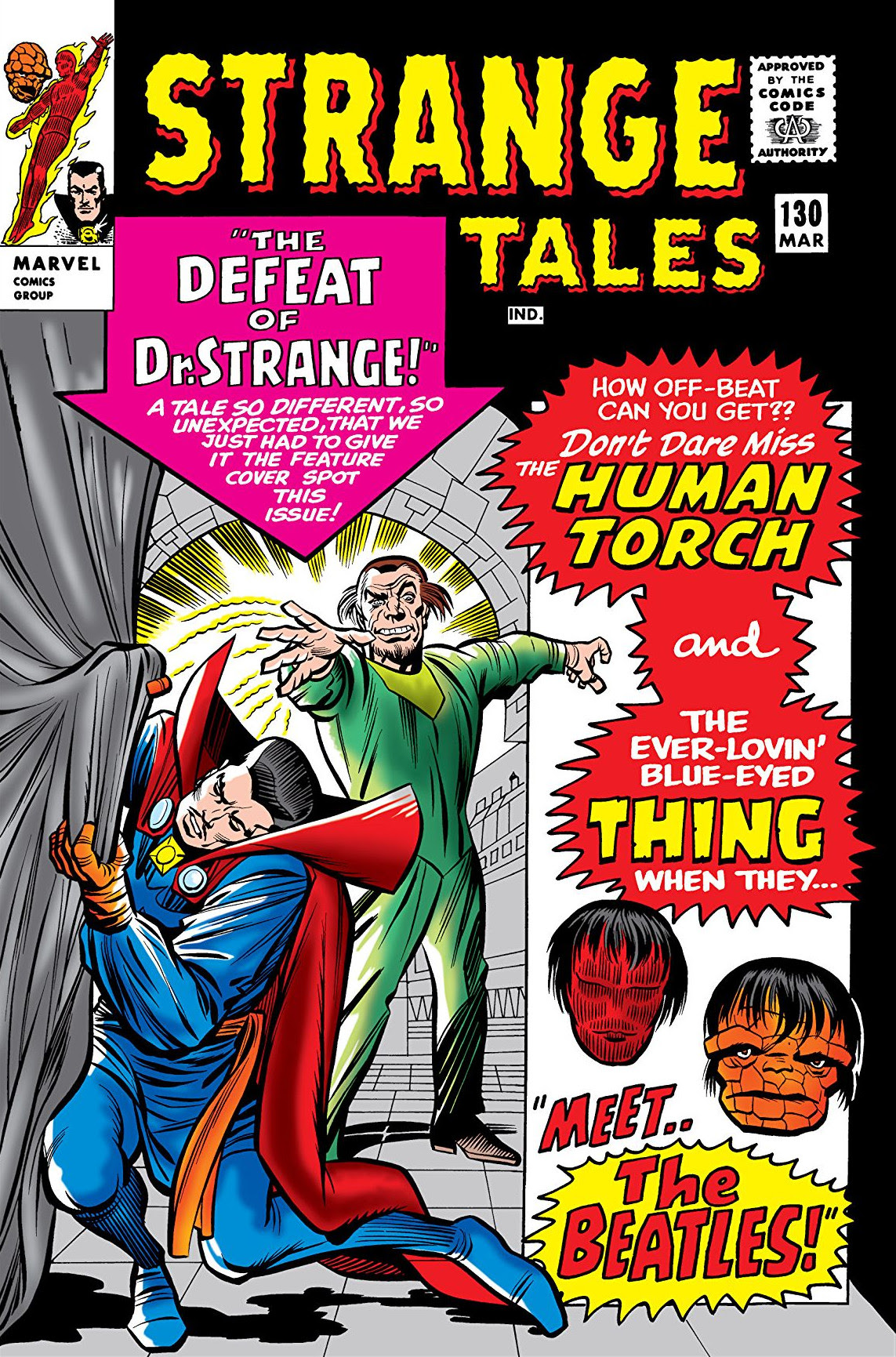 This comic has leapt up out of the vault to be reviewed because interest in it has piqued since the villain of Kaecilius the villain in Doctor Strange was announced.

My particular version of the comic is not in the best condition.  It has some spine terrors, as well as someone's name "Ronald Owen" stamped on the first interior page.  There is also a section in the back where it appears someone cut out an ad.  That said it has good colors, not many tears or creases so its very very readable and perfect to go through for a review.  Lets face it if it were a mint 1965 comic I would not be reading it!


Why is Strange Tales #130 cool?
This comic goes back to the beginning of Marvel when the Fantastic Four was still king.  The Thing was still a huge character but had started to become eclipsed by Spider-Man.  Comics with two stories were pretty normal back then it was kind of like a double header at the drive in movies.  Pay for one and get two.  The stories did not necessarily have any connection to each other which is the case here.
What is kind of cool about this comic is that both stories are in there way interesting.

Right off the bat lets start with notable appearances.  This is the first and only Marvel comic to feature the Beatles in continuity.  All four Beatles appear in the first story of the comic.  Some have noted that as time scale of Marvel slides forward of time it would make the appearance of the Beatles impossible as John Lennon would die prior to the Thing being able to meet them.  Some have said that for official purposes they should be considered impostor android or Skrull Beatles.  That said the comic's intention during its initial publishing was certainly to have the real Beatles depicted.

The next major appearances are within the Doctor Strange story.  Kaecilius a pretty unknown character makes his appearance as a mystical henchmen of Baron Mordo.   Kaecilius is not in too many comics less than 10 prior to arrival of the Doctor Strange film which has used the character as its main villain.   This has greatly raised the profile of this previously obscure character.

One other character a friend of the Ancient One and a minor sorcerer himself named Sen-Yu makes an appearance.  Sen-Yu would go on to make a few more appearances as well.

Beyond the appearances the most notable thing about this comic is the Doctor Strange story itself.  This is the story where Baron Mordo strikes up a deal with Dormammu for power.  Dormammu gives him tons of power and Mordo uses it to whip up on Strange and the Ancient One.  This is a pivotal moment in the Strange/Mordo/Dormammu origin and its all starts right here.  The iconic "The Defeat of Dr Strange!" story would go on for 16 more issues!


Now for Strange Tales #130!
The Story - The Defeat of Dr Strange!  It begins with Baron Mordo and Dormammu agreeing on a pact.  Dormammu will give Baron Mordo massive amounts of magical energy and will use it to destroy Dr Strange.  Mordo agrees and immediately attacks the Himalayas temple of the Ancient One.  The blasts of Mordo are very powerful and the Ancient One and Strange barely manage to shield themselves they begin to flee.  Strange uses a blinding spell to buy them some time.

He manages to escape much to Baron Mordo's dismay.  Mordo then recieves an army of wraiths to search for Strange.  Mordo also tells a network of magical baddies to be on the look out.  Starnge enters into a conflict with a group of these bad guys and defeats them.  Strange and the Ancient One are given aid by Hamir the Hermit and Sen-Yu allies of the ancient one.  No shelter though seems safe from the relentless forces of Mordo.


Doctor Strange Store:
As a member of the Amazon Affiliate program Toylab is able to bring you these awesome Amazon deals on Doctor Strange products.


As for Kaecilius!
What is revealed about Kaecilius in Strange Tales 130? - ALMOST NOTHING

All Kaecilius does in this comic is shoot magic blasts as a pretty ordinary looking henchmen of Mordo.  Presumably he too has been given more power through Dormammu.  He is not identified in the comic but you can pick him out as the henchman that has the thin mustache. That is really about it as far as Kaecilius goes.  I wish I could pull out some amazing, deep character thoughts and motivations that could be used in the film but here he is a very narrow, 2d, generic henchman.  I think the only things you could draw from this is that he is loyal to Baron Mordo and also that he is at least some magic powers.

In the Doctor Strange film Kaecilius is revealed to have been a former pupil of the ancient one who has fallen to the allure of immortality presented by the Dark Dimension and its ruler Dormammu.  In this way the film version of Kaecilius is something of a amalgamation of the classic version of Baron Mordo.  In the film it is Kaecilius who betrays the ancient one, and Kaecilius who forms a pact with Dormammu.  Kaecilius has motivations and reasons that make him interesting.  For example the fact that he knows that the Ancient One draws her anti aging powers from the Dark Dimension is news to almost everyone else.  Mordo is interesting in the film as well because he effectively is in rigid opposition to Kaecilius and opposes any use of magic to alter the natural order.  In this film this makes Mordo on the side of Doctor Strange but it is easy to see how the two could come into conflict down the road.  I do not always like how comic material is changed for the big screen but in the case of Doctor Strange I find the changes to Baron Mordo and Kaecilius made them far more interesting.


What is revealed about Dormammu?
Quite a bit.  He reveals he is not mortal, that he can not directly effect our plane.  He also reveals that he is extremely powerful and able to do spells that no one else can.  You also learn that he is from the Dark Dimension and that he has armies of weird things like the weird ghost wraith guys he sends to find where Strange is hiding.