Pokemon Go - Reactions from Teachers and schools may scare you!

The phenomena of Pokemon Go exploded all over the world in July 2016.  People of all ages love the game but it is especially popular with Highschool and College students.  Some people bemoaned the throngs of distracted walking players.  Fights with Pokemon Go players have even broken out at places where people considered playing a game offensive.

So far though one important institution has been immune to the game,....School.  While some year round school and some Summer school have encountered the game a huge tsunami of students is preparing to go back to school this fall.  Many will be walking into the school with their heads down looking for Pokemon.

Many schools have given up on taking away students phones as they have become too ubiquitous.  Pokemon Go presents a unique problem in that it is extremely popular and also that it may function extremely well inside a school.  Multiple school's near my home actually feature Pokestops where players can periodically load up on items.  Pokestops reset every 10 minutes or so meaning an inclined student could attempt to hit a Pokestop inside the school multiple times a day.  This is not rule out even the crazier happenstance.  Rare pokemon siting have cause huge herds of gamers to appear at the most biazzare locations.  What if a rare Pokemon appeared in a school Would crowds of students pour out of class to capture a Snorlax?      Its hard to say.

How will the school react to all of these distracted students.  We have our first clue from a Texas professor at Texas State Technical College, Amelia Carnagey.  Amelia created the following poster to warn her students that hunting Pokemon in her class was both forbidden and potentially costly! 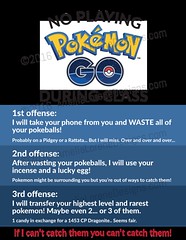 The poster is now even for sale to other teachers at a teacher supply website.  Amelia says the poster was a tongue and cheek joke that her students were in on.  That said I expect many teachers to take a strict view with the game.