Pokemon Go - Pokemon Battling tips and how to win 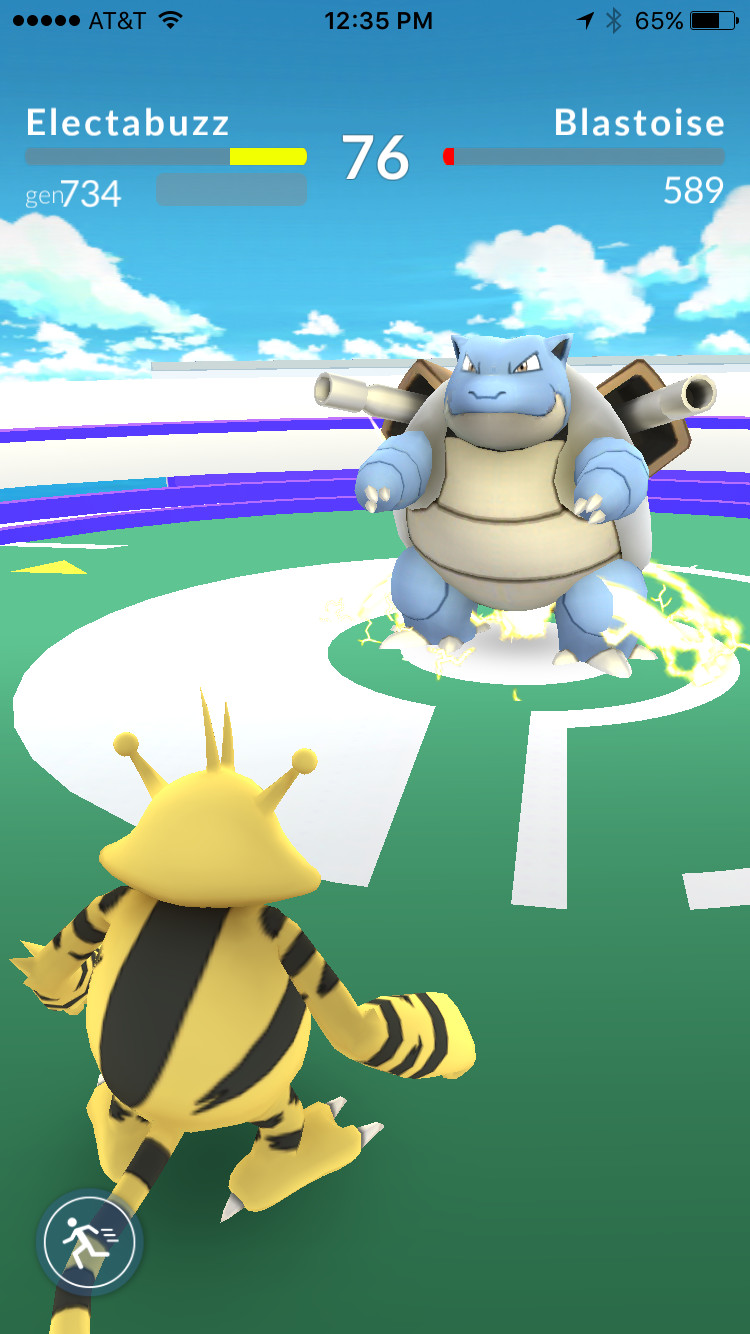 Pokemon Battling and how to win
Alright so you have level 5 and you now want to go to a gym and try to battle.  No so fast grasshopper you are not READY!

Pokemon Go does not have much in the way of directions.  This post along with others is designed to help new users understand the important strategies of battling at gyms.

First lets cover why do you want to battle at a Gym?
1) Its fun to test out your Pokemon against other Pokemon
2) You get to brag when you beat your friends Pokemon
3) If you win your Pokemon will be seen as a gym Guardian by everyone in your neighborhood
4) If your Pokemon lasts as gym Guardian for 20 hours you will recieve free Coins that can be used to buy other Pokemon items.


Battling a Gym controlled by your Team

If you team is in control of a gym you can go there and battle.  Battling your own team is often referred to as "Training" your pokemon.  Battling at gyms from your own team helps build up your Team Gym's reputation which allow the gym to have more Guardian Pokemon stocked there.  If you beat enough of the Pokemon there your Pokemon can take the place of one of the Guardians there.

Update 10/6/2016
Niantic made a change that allows users to train up 6 Pokemon at friendly gym.  It also allows for the Guardian Pokemon at the gym to match the CP (Combat Power) of players Pokemon.  This should make it easier for new or sporadic players to enjoy gym battles in the game.

Message from Niantic on Update:

Trainers,
As we continue to make improvements to Pokémon GO, we have made an enhancement to the Gym experience for Trainers of all levels. In an upcoming version of Pokémon GO, when training at a friendly Gym, Trainers will be able to bring six Pokémon to battle instead of one. In addition, the CP of the Pokémon you are training against may be temporarily adjusted lower during your training session to generally match your Pokémon’s battle capabilities.No matter what your level, you can now have an impact on your team’s Gym. Walk with your Buddy Pokémon to that nearby landmark and show your Team Leader that you can battle with the best!


Battling a Gym from Another Team Considerations:

Build up your training level:
Really to be very successful at battling it is likely you will need to hit a trainer level of at least 10.  The reason for this is that more powerful Pokemon appear as your level gets higher.  Most players get to the 10 -20 level pretty quick but then it becomes a slow xp grind.  So if you are above level 10 you are at least comparable to some of your competitors.

Team Building:
Next you need to do is to build a team of high CP pokemon from as many types as you can.  Everyone is going to be able to build a high CP Pigeot and Ratticate which covers flying and Normal.  Try to get at least one other powerful Pokemon.  Do not focus on powering up Pokemon too much.  A lot of new players waste a lot of stardust powering up Pokemon when they should be focusing on increasing their training level.  At a higher training level you begin to capture higher level Pokemon.

The next thing to do is to scout out the gym you want to battle at.  You can pull up a gym that is on your screen by tapping on it.  This will show what a few important facts including:  Which team is in control of the gym, which Pokemon are guarding the gym, and how powerful those Pokemon are.  What kind of Pokemon do they have, how many are there, and how powerful are they.  If you are attacking a high level gym you may need to attack it with some other players.

Figure out the type of Pokemon at the gym then pick your own Pokemon accordingly.  You can set the order of your pokemon up to be best arrayed against your foes.
Pokemon Types Explained
The type of attacks of a Pokemon vs the Type of the Pokemon determine a portion of each attacks effectiveness.  I have seen a few people attempt to break down the attack values and they seem to use a variety of variables.  The only one known for sure though is the type damage.

Most people just tap their screens as hard as they can and occasionally do a special. That said I have seen a few people really focus on dodging and do quite well.  Including, taking down much higher level Pokemon.

You can also switch Pokemon that are battling by transferring your Pokemon out and moving a new Pokemon in.  This can allow you to take advantage of Type mismatches.

Aftermath.
If you succeed the gyms reputation will be reduced.  If it is reduced enough then that team will get booted from the gym and the gym will lose its color.  This means the gym has gone neutral and anyone can take it.   At this time you can then add your Pokemon to the gym.  I recommend transferring your strongest level Pokemon to the gym.  Once your Pokemon has been added immediately attack the gym again.  Battling your own gym builds up its level.  You can also attack gyms that belong to your team to build up their level.

If any specific Pokemon like Snorlax, or Vaporeon is giving you trouble be sure to check out our How to Beat articles included in the Pokemon Go Tips below: