Pokemon Go! How to beat Flareon 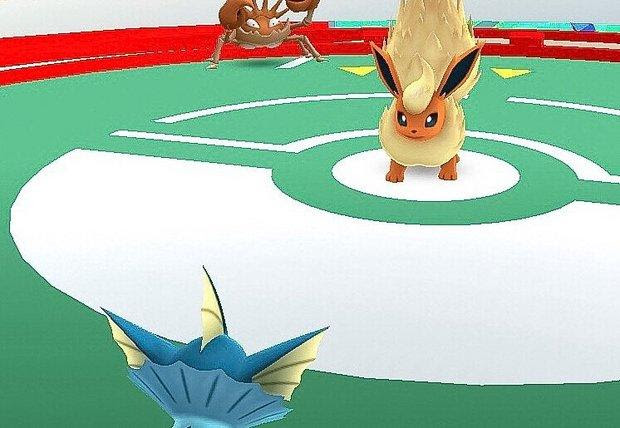 How do you beat Flareon? Pokemon Go questions


One thing that has clearly happened in the beginning stages of Pokemon Go is that the Eevee evolutions of Vaporeon, Jolteon and Flareon have taken over battling.  They are by far the most common sites in gyms and can also be very hard to defeat.  Of these three the most seemingly powerful is Vaporeon but I still see a lot of Flareons.

I think Flareon is the cutest looking of the three Eevee evolutions but don't be fooled he can still rock you.  Especially if you pick the wrong Pokemon!

Want to take down this pesky flaming Pokemon?  Lets get some strategies.


Flareon is a FIRE type Pokemon.  As such he does poorly against Water Pokemon, Rock Pokemon and Ground Pokemon.

Looking at these types the most common in the game is also the most likely the best pokemon for the job, and thats Vaporeon.  Vaporeon is a very powerful Pokemon all by itself and with a WATER based edge it should be able to beat Flareon pretty easily.   Like Flareon, Vaporeon is based off Eevee which appears pretty frequently in most areas and is very powerful.  Keep in mind that Vaporeon is one of three different evolution that Eevee can evolve into.  Read about the Eevee Evolution to understand how you can control what your Eevee evolves into.

As far as other WATER Pokemon  I have seen a few people also take Flareon down with Starmie.   However, I can not find a Starmie in my area for the life of me.  Getting WATER Pokemon sometimes is dependent on being near large bodies of water which being in Colorado I am most assuredly not.  If you share my predicament you might consider Rock  Pokemon.

Another fairly common Pokemon to use is the Geo Dude evolved form.  There are a lot of Geodudes in my area and they evolve into a powerful Rock  Pokemon called Graveler and then into an even more powerful form called Golem.

There are a couple other Rock pokemon to consider.  I have seen one person near me a powerful Onyx.  This would also work but heretofore I have had a hard time catching one.  These other Rock pokemon just seem too rare to recommend for practical advice.

Trial Runs of this strategy have shown it to work well.  We have seen a Vaporeon first taking out a fairly powerful Pigeot before taking on Flareon.  The Vaporeon though weaker than Flareon still owns it.  We have also seen a 1504 CP Flareon vs 973 CP Vaporeon a difference of 500+ CP made up just by Pokemon Type.

Thats it, now go out and kick some Flareon booty!


Show your Pokemon Love with these fun Poke Products!