Who is the Patriot - SHIELD's new Director 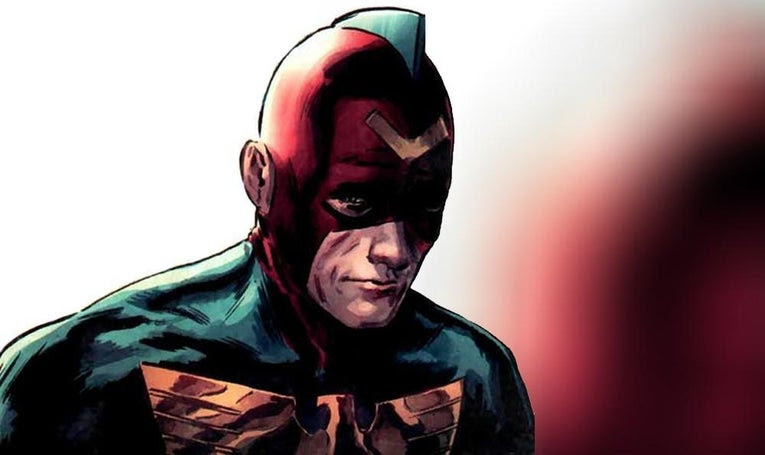 Meet Jeffrey Mace aka the Patriot

Jeffrey Mace aka the Patiort is a Marvel hero that goes back to the 1940 Marvel comics..
In Season 4 of Agents of SHIELD Jeffrey Mace is revealed to be the new Director.  Coulson decided he should step down and turn over the   Mace is a character whose roots go back to the 1940s in the comics.  We do not yet know exactly how the character in Agents of SHIELD will differ from his comic counterpart.  He is played by actor Jason O'Mara.

In comics:
Jeffrey Mace aka the Patriot is a character that once filled in for Captain America..  Jeffrey Mace fought alongside the Howling Commandos against the Nazis in WW2 as a costumed superhero. He also used the name the Patriot and started a group called the Liberty Legion.  The Liberty Legion called itself the homefront heroes and helped fight spies and sabeuters on US Soil.

After WW2 Mace continues to serve the United States.  He became embroiled in a consipracy to assinate John F Kennedy.  During a subsequent fight, Mace witnesses William Naslund the 2nd man to don the Captain America Mantle die.  Seeing the mantle of Captain America as being too important to die he decides don the mantle himself.  As the third Captain America he fights for awhile.  Eventually he marries Betsy Ross and as an old man dies of cancer.

In show:
Jeffrey Mace is an Inhuman and is a known hero to the American public.  He reveals to the public that he is an Inhuman with his presence meant to help create trust between normal people and the Inhumans.  It is unclear what exactly he had done prior to becoming the director.  President Matthew Ellis himself appointed Mace to the position of Director after Coulson stepped down from the role.   He also has a combat suit that looks heavily armored.  He has been shown to have a high degree of super human strength and durability with unknown limits.

After the Ghost Rider arc of the 4th Season many mysteries continue to surround Mace.  This is set to be a focus of the 2nd arc of the 4th Season LMD.  One major clue on this focus is that the second episode of the LMD episodes is titled, "The Patriot".
Jason O'Mara revealed to TVline that some of the mysteries of the character will be explored in the middle segment of Agents of SHEILD:

How Mace got his powers, his whole backstory, is going to be a major part of the next batch of episodes. How he legitimizes Daisy is going to be revealed as well, so there’s lots to look forward to there.

The episode "The Patriot" (Season 4: Episode 10) hits upon a new mystery regarding the Mace.  Why does he always keep his suitcase next to himself at all times.  This episode reveals that Mace is not a real Inhuman but was given a special serum from Talbot that super enhances his strength and durability.  After this revelation, Coulson confronts Mace and tells him that he can still be the figurehead of SHIELD but Coulson will call the shots from now on.

The SHIELD team along with Mace become embroiled with hunting for the magical book the Darkhold and infiltration of SHIELD by the android AIDA.  A group of SHIELD agents including Mace are captured and have their minds put into a digital world called the Framework.  In the Framework much of reality has been slightly altered for each individual.  In the world of the Framework Mace is the leader of the Inhumans and resistance to Hydra.  He calls himself the Patriot and actually appears to be a real Inhuman with super strength.  Mace dies in the Framework holding up a building at its support level providing time for people to escape.  AIDA is shown checking Mace's body in the real world where he seemed to die along with his Avatar in the Framework.


Pictures
Marvel has released the first picture of Jason O'Mara as the new director: