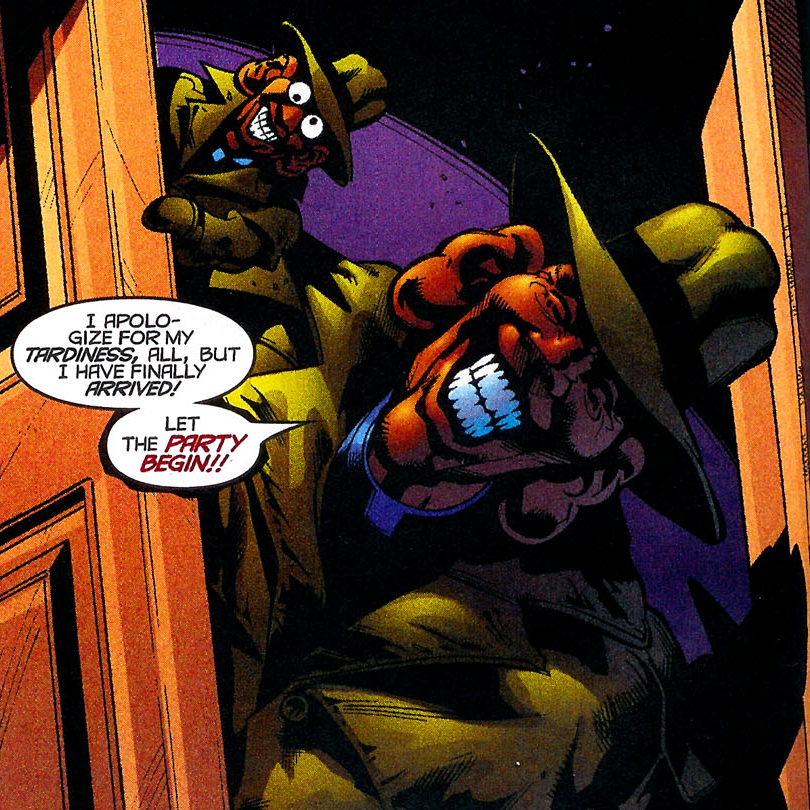 Who is Achebe? Black Panther Villains

The true origins of Achebe are unknown but at some point he sold his soul the demonic devil like being known as Mephisto.  Mephisto granted Achebe powers that are never fully explained.  Either through Mephisto or other means Achebe has a highly schemer, strategic and insane mind.  While appearing some what older he is also an extremely good athlete and acrobat.

The rumored tale of how Achebe came to be is that he was a humble Ghudazian farmer with an unfaithful wife.  Ujankan guerrillas came to his farm seeking refuge and he offered them hospitably.  They repaid his act of kindness by stabbing him repeatedly and burning down his farm.  He was said to have been stabbed 32 times.  They also stole his wife who may have gone willingly with the men.  Seeking revenge the dying farmer reached out to Mephisto and made a pact to sell his soul in order to get revenge.  He then hunted down everyone associated with Ujankan guerrillas and his wife and kills them all.  It is said even casual acquaintances who barely knew his wife were hunted down and killed.  Victims of Achebe were said to have been stabbed 32 times, the same amount of stabs he endured at the hands of the Ujankan guerrillas.

Achebe came to America under the guise of Reverend Doctor Michael Ibn Al-Hajj Achebe.  In the United States he earned multiple Doctorates.  At some point he becomes an information source for the US Intelligence Agencies who were seeking to gain an inroad to Wakanda.  Wakanda had made massive technological leaps but had remained in many ways reclusive and closely guarded its secrets.  Achebe purportedly came from the nation of Ghudaza a neighbor to Wakanda.  A variety of forces then come together to instigate a plan to take over Wakanda with Achebe as one of its driving forces.  The idea is to start a brutal war in Ghudaza that would create of waves of refugees.  These refugees would then ask to enter Wakanda.  This issue would greatly divide Wakanda and cause political stress inside the country.  If Wakanda accepted the refugees then trojan horse agents would be inserted inside the refugees to help instigate a revolution.  Achebe was repatriated back into Ghudaza and once the instigated civil war broke out he was brought into a Wakandan camp.

T'Challa  / Black Panther was lured to the United States through a scandal with the Wakanda backed charity known as the Tomorrow Fund.  With the Black Panther out of the picture Achebe successfully instigated a coup d'etat.  Ramonda the step mother of T'Challa agreed to share power with Achebe.

Unknown to Achebe, T'Challa had predicted that the refugees contained agents but he did not know whom.  He decided to allow them in with the express purpose of luring out his opponent.  His step-mother apparent betrayal was also a machination to learn more about his opponent.  She in truth remained loyal T'Challa and acted as a spy.  T'Challa learns of Mephisto's influence on Achebe and severes the connection between the man and demon.  This leads Achebe to go full on crazy.  Achebe begins talking to a puppet in meetings.  Seeing the level of his delusions his former allies break ties with the mad man.

Achebe releases security robots called Black Panther Prowlers on the populace and T'Challa battles the robots and removes Achebe from power.  Achebe however manages to escape while disguised as the Black Panther.

He later returns after T'Challa had been deposed by Erik Killmonger. Achebe desired to have T'Challa back on throne so he would have some to play with.  He sent a mercenary team led by Deadpool to steal Killmonger's pet tiger named Preyy.  He hoped that Deadpool would end up killing Killmonger in the process.  This did not happen but Achebe satisfied his blood lust temporarily by killing the tiger.