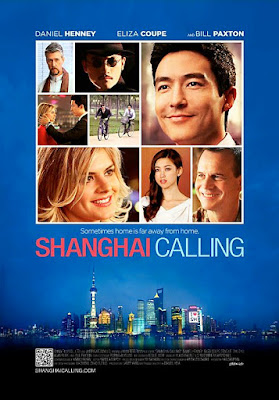 A film Review by Sir Kent.


So, I thought I would throw you guys a curve ball and write a review on something that may surprise you all...A ROMANTIC COMEDY! That's right bitch’s! I'm like an onion! I got layers! I do enjoy stuff that doesn't explode, bleed or has super powers.

By accident I discovered a true gem called
SHANGHAI CALLING  (2013).


Shanghai Calling tells the story of Sam Chou  (Daniel Henney/X-Men Origins: Wolverine). He is a second generation Chinese American who is an update and Comer in his
New York law firm. Sam is about as far removed from his culture as I am. He doesn't speak the language, he only tolerates the food and can't remember the last time he dated and Asian girl! (We could be brothers!)

When one day, he is called into his bosses office. He is fully expecting to be promoted to partner at his firm but instead, is ordered to Shanghai to represent a client on a patten that will revolutionize the cell phone industry. His bosses tell him honestly that, other than his skill, the reason he was picked is because he's Chinese. (Which is racist as F'BEEP ! You can't tell somebody that shBeep!) So, he finds himself in a world that he knows nothing about.


He doesn't speak the language, know the customs or honestly even want to be there. To make matters worse, the Shanghai office NEEDS him to close this deal in order to stay open. No pressure! He suddenly finds himself in the world of “Expats”. “Expats” are foreigners who for reasons of work or marriage, have settled in a country. They form tightly knit communities and depend on each other for support.

He meets one such person named Amanda (Eliza Coope/Happy Endings). Amanda is what's known as a relocation specialist who helps people try to settle into their new lives. There's just one problem, Sam has a New York size chip on his shoulder and thinks that everyone should kiss his ass! This is apparent in his dealings with Amanda, his co-workers and especially his STUNNING assistant Fang Fang (My future ex-wife Zhu Zhu). He is so busy trying to proof that he's the shit that, he nearly looses the account!

Enter Donald  (Bill Paxton/Aliens, Edge of Tomorrow) who is the mayor of “America Town”. He convinces Sam to seek the help of a guy only known as “Awesome Wang”. I think the one line that stayed with me through the movie was “We call ourselves Expats but really, we're just immigrants”. I like how the studio took a chance in a group of unknowns  (Except for Paxton). The movie was made unique by the culture, setting and understanding that sometimes, home can be the last place you'd expect.

I would recommend this movie because it is funny throughout, the cast suits the story being told and, it has a happy ending. Who don't like those? Basically, surprise your girl with this now and score a few points. Suicide Squad is next month!﻿


Sir Kent Toylab Store:
Toylab is a member of the Amazon affiliate program and is happy to bring you these great deals recommended for you by Amazon.