Part of the fun of Pokemon Go is running into other Pokemon Trainers doing the same thing you are.  These trainers may quickly walk past you or they might simply give you nod.  I have however met a couple of  really cool people in Pokemon Go!  You can too!  Talking to people can also help with the game which gyms have the toughest Pokemon.  Where are people catching the most in your neighborhood all of these tidbits can be gleaned by talking to others on a mission to Catch them All.

Ive picked up a few tricks on how to communicate with people. 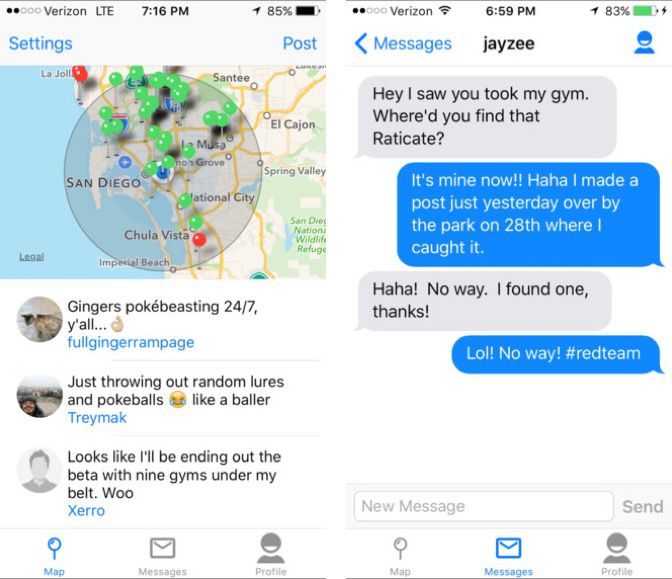 GoChat has become successful along with Pokemon Go.  It is a separate App that allows you to leave and see messages from other players at Pokemon Gyms and Poke Stops.  The App is pretty brilliant because it covers up one of Pokemon Go's flaws in that it has no such messaging system.  GoChat has become somewhat of a victim of its own success.  Built by Beta Tester who realized that the game need a chat system it was ready to launch with the game.  However, it has been overwhelmed with over 7.5 million users which is an absolute ton for a small app.  This usage has overwhelmed the apps servers and it is currently struggling to keep up with people logging in.

The app is not generating money but its creator Jonathan Zarra has found investors and they are in the process of upgrading their servers.  I have read one estimate that around 10% of Pokemon Go users are logging into the app which is astonishingly high for a third party application.

I expect the server issues to be short term and for GoChat to be back up in no time.

The Pokemon Go Plus is an alternative device to use to play Pokemon Go.  The device itself is not too expensive and is kind of a subtle fashion accessory letting everyone know you are a Pokemon Trainer too.  It costs around 35 dollars.

The Pokemon Go Plus lights and vibrates when you approach a poke stop or a pokemon.  It even allows you to throw a pokeball to catch a pokemon.  The one caveat is that the watch like device does not allow you to catch new types of pokemon.  It will however warn the user so they can at the very least turn on their smart phone.

All in all its a pretty cool device and it definitely lets the world know you are serious about Pokemon Go!

3) Wear a  Pokemon Hat
Ok this may seem silly but wearing a Pokemon hat while hunting for Pokemon is a lot of fun.  People we ran into while wearing our hats busted out in joyous laughter with many saying they will do it next time.  It is kind of putting up a flag telling the world what you are up to.