The video appeared on Rock's Youtube channel. Youtubers Matpat and Ali-A join in on the fun on this hilarious spoof video.   The video is full of Pokemon jokes and also some jokes on the Rock himself.  It is pretty genius marketing for the Rock's Youtube channel that is already close to a million subscribers and I expect to grow with the release of videos like this.

I am really curious how this was made.
A how the Rock found time to do this or B how he put together a talented team to do this.  The video actually has its own Pokemon spoof jingle......A FREAKING JINGLE.  The Videos are really well done to with a cartoon Pokemon rock inserted into screenshots of the game.  Obvisouily the acting and writing in the video are hilarious.  Its really well done.

On top of the funny Pokemon Trash talking that PokeRock does there are some other funny details.
Notice his CP level (Combat Power)  it is ......Infinity. 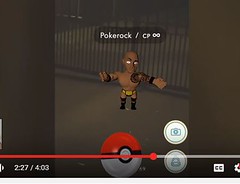