How do you beat Snorlax? Pokemon Go questions

How do you beat Snorlax? Pokemon Go questions


Snorlax looks cute and kind of funny but don't be fooled! This Pokemon is tough as nails.  As far as tanks go in the Pokemon universe he is the ultimate one.

The Snorlax is one of the more famous Pokemon as he often has a major role in the games as an obstruction and a boss.  Yes this Pokemon is so big that when he falls asleep no one can move past him.  In the first game you needed to get a flute to wake him up, then battle him.  Catching him has always been a big deal.

In PokemonGo Snorlax is a rare Pokemon but he is becoming a very common sight in Gyms.  His massive amount of hit points makes him a hard hitting tank that does well against almost all other Pokemon.  There is even one gym I found that had multiple Snorlax in it.

There are some complaints by people that Snorlax is overpowered in the game.  I personally think that it is ok how powerful a rare Pokemon is and you have to keep in mind  there is still a way to take him down.  Read On for more on that.

Shop for Pokemon toys and merchandise!
Toylab is a proud member of Amazon's Affiliate program and is happy to bring you these recommended  great deals from Amazon!  Snorlax Toys are very popular with Pokemon fans.  Kids and adults love the Snorlax Plushies and stuffed animals.  You can sometimes find Snorlax toys and merchandise at major retailer like Walmart, Target, or Walgreens but by far the easiest way to find them is through Amazon.  It may be one of the popular Pokemon Toys there are next to Pikachu.  We have selected some of our favorite Snorlax toys for you to check out below:


HOW TO FIGHT A SNORLAX or should I say...
HOW TO BEAT SNORLAX
WHAT IS THE BEST POKEMON TO USE VS A SNORLAX

Want to take down this big galute?   Its not easy but it can be done with some planning.

First things first you need to have a pretty strong Pokemon.  Look at the CP of the Snorlax and make sure you get relatively close.  No matter what Snorlax is going to be tough.  Snorlax is unusually powerful in this game and it is fair to say that he does not have a true counter.  You need to either use your most powerful Pokemon or build up a stable of Pokemon to take him down.

Snorlax is Normal Pokemon but has potential move sets that very between a few types. 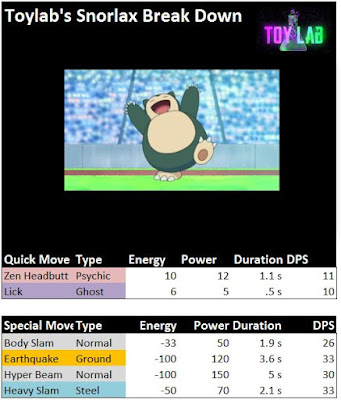 Here are some good Pokemon to look at for Snorlax Counters:

Fighting Pokemon
The thing to know is that Snorlax is a NORMAL type Pokemon and the best Pokemon to use against NORMAL type are FIGHTING pokemon.   Unlike other types of Pokemon the NORMAL types are really pretty steady state against most others Pokemon and FIGHTING is really their only consistent weakness.  What makes NORMAL's even better is that there are not too many FIGHTING Pokemon.  Likely the most common FIGHTING Pokemon I have seen in Pokemon Go is a Mankey.  Get yourself a Mankey build him up and evolve him into a Prime Ape.

You could also build up either a Hitmonlee or a Machop if you find them.  In my experience those have been more rare than Mankeys though.  If you find one though they may be worth to build if only to take down Snorlax and other Rock Pokemon.

The reality is there are not very many FIGHTING Pokemon so if you find an area that has them go there a bit and build up your Snorlax Slayer.

I have seen Fighting Pokemon around grass areas and around major recreational areas.  I captured a 400 cp Hitmonlee in a hotel in Calgary, Canada.

Machamp!!!!!!!!
Machamp is the best of the best in the game currently at taking down Snorlax and most other Normal Pokemon.
The best fighting Pokemon though is a MaChamp if you can get him he is likely the best FIGHTING  Pokemon counter to Snorlax.  The one bad thing about MaChamp is that he does suffer from a poor move set. 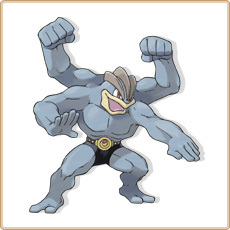 One other tip on building a Pokemon champion to take down the Snorlax.  Sometimes getting a FIGHTING Pokemon is not quite good enough.  To beat Snorlax make sure your Pokemon has 2 FIGHTING style attacks.   Sometimes you will catch a FIGHTING a Pokemon that has NORMAL attack and only a FIGHTING Special.  You  really want to get one that has both actions as FIGHTING.  While a FIGHTING Special can do a ton of damage its rarely enough when you are fighting a Snorlax.   The Snorlax just has too many hit points to give up ground on one of your attacks. You want to lower his HP with the FIGHTING fast attacks then deliver huge blows with the FIGHITNG special.

One other problem is that some Snorlax have the move Psychic Headbutt which does a ton of damage to FIGHTING Pokemon. 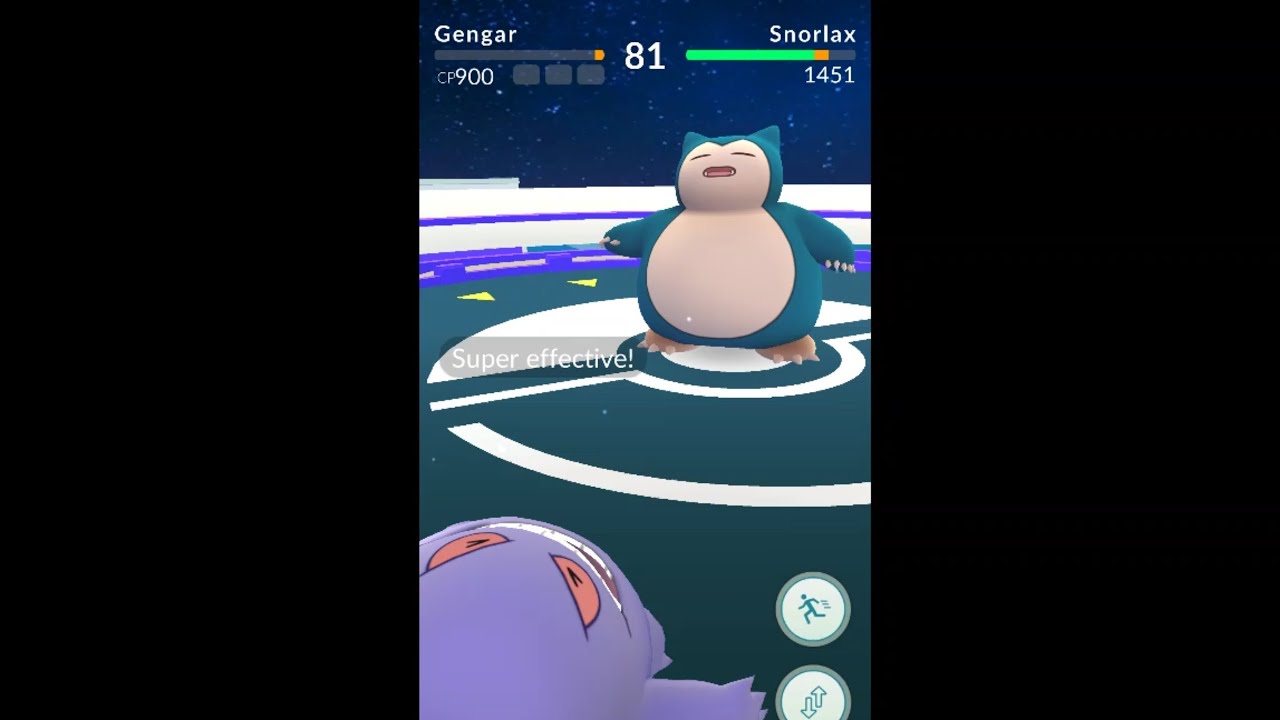 One other option is to use a GHOST type Pokemon that are strong against Normal type Pokemon.

Update 8-8-2016:
I have tested some of these strategies.  I use a PrimeApe to battle Snorlax and seems to do as well anything though I will say Snorlax is still pretty hard.  Taking on a 1200 CP Snorlax with  a 500 PrimeApe is not going to happen.  However a 1000 Prime Ape can easily handle the 1200 CP Snorlax.   My Prime Ape is named Snorlax Slayer and has taken down 3 Snorlax.

Also Ghost Pokemon do incur damage from Snorlax but at a much lesser rate.  I have not seen any attack types be completely immune.  It seems to me that each attack has different types of damage with some of this damage coming from the Type/Type.  This Type/Type damage portion is what is reduced to effectively zero.

Update 8-23-2016
I finally have my Gengar ready to test out against Snorlax.  Multiple people have told me that they think Gengar works the best.  I will try to provide an update tonight.

My Gengar does work though honestly I think he should work a little better than he does.  My thinking here is that Gengar has a high speed in the other games that has not been translated into increasing attacks (So far) in Pokemon Go.  Gengar is one of those fast Pokemon that suffers some from how Speed is treated in the game.  If Speed were changed Gengar could easily become one of the best Pokemon in the game.  In some sense keeping a Gengar and Jolteon (Both are fast) is a good insurance policy as I think Niantic will update how Speed is used down the road.

I do think he is currently better than my PrimeApe for taking down Snorlax and is my best Pokemon so far.  At the very least Gengar does well defensively he not suffer from the Snorlax Psychic Headbutt attacks and he also does well against the Normal attacks.

I will warn anyone that getting a Gengar is kind of a bear.  You need a TON of Ghost Candy so if you get one you might make your buddy a ghost and also seek out known Ghastly nests in your area. 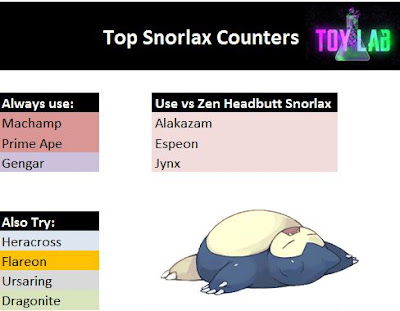 
Toylab Pokedex - More Pokemon GO! Tips
want to learn more about Pokemon Go?  We have compiled an array of articles and videos on how to beat and catch specific Pokemon as well as other tricks in our Toylab Pokedex.  Want to catch them all?  Then this is the place for you!