Who is Ghost Rider?

Who is Ghost Rider?
Ghost Rider is the name of multiple different supernatural anti-heroes in the Marvel Universe.  Generally, the Ghost Rider's are hosts for demonic entities called a spirit of vengeance that gives them a variety of supernatural powers that they use to dispense justice.  Ghost Rider has appeared in numerous comics and cartoons.  Nicholas Cage played Ghost Rider in two difference films.  Six different Marvel heroes have used the name Ghost Rider. Ghost Rider Store:
Toylab is a affiliate member of Amazon allowing us to link directly to Amazon from our site on cool products like those below:


Ghost Rider Movie Theme Song:
The Ghost Rider movies were far from perfect but one of my favorite things they did was integrate the old Ghost Riders in the Sky song with a new rock take.  The song appears in a scene were Ghost Rider climatically charges forward on his motorcycle along with the Phantom Rider riding a ghost horse at his side.  This was my favorite movement of both films and I like the version of the song.

Johnny Blaze-
Johnny Blaze is a stunt motorcyclist who sells his soul to the demon Mephisto in order to save the life of his father.  Mephisto bonds Johnny with a demon named Zarathos a spirit of vengeance that reacts violently when in the presence of evil.  After being bonded with Zarathos, when Johnny comes near evil is dramatically transformed.  His flesh is replaced with blazing hot hellfire.  He can shoot the hellfire out of his skeletal like hands.  He also has a powerful motorcycle and a chain as weapons.  Ghost Rider uses these weapons to violently take down evil threats around them.  The brutality of Ghost Rider spirit causes Blaze great concern and at certain points in time he frees himself from its influence.

Blaze has been the Ghost Rider on and off again since his initial appearance.  He has also made appearances in stories of later Ghost Riders as a mentor and ally.

Danny Ketch-
After his sister is wounded by a ninja gang, Danny finds a mystical Motorcycle imbued with a spirit of vengeance.  Danny transforms himself into Ghost Rider and takes vengeance on the gangsters.

Danny gets along with his spirit of vengance and does not fight its influence the way Johnny fought against Zarathos.  In the end of the series the spirit that Danny has teamed up with is revealed to be the Angel of Death /Judgement.

Danny Ketch appeared to die in his last comic of his run.  However, he has since been shown alive.

Robbie Reyes-
Robbie is a high school student in East Los Angeles.  He lives with his disabled brother Gabe.  The two brothers try to keep away from trouble and violence in their neighborhood.

Robbie enters a street race with a black charger.  He hopes that with the prize money he can move his family to better surroundings.  Unbeknownst to Robbie his car is carrying pills that have transformation properties made by the super villain Calvin Zabo (Aka Mr Hyde).  Mercenaries hunting for the pills gun down Robbie killing him.  Robbie is reborn as with a fiery skull, he drives off his car that is now also alight in flame.  Robbie is then introduced to his spirit of vengeance who is not a spirit of vengeance at all.  The spirit of a victim of gang violence named Eli Morrow has attached himself to Robbie's car.  This spirit then brought Robbie back as the Ghost Rider. 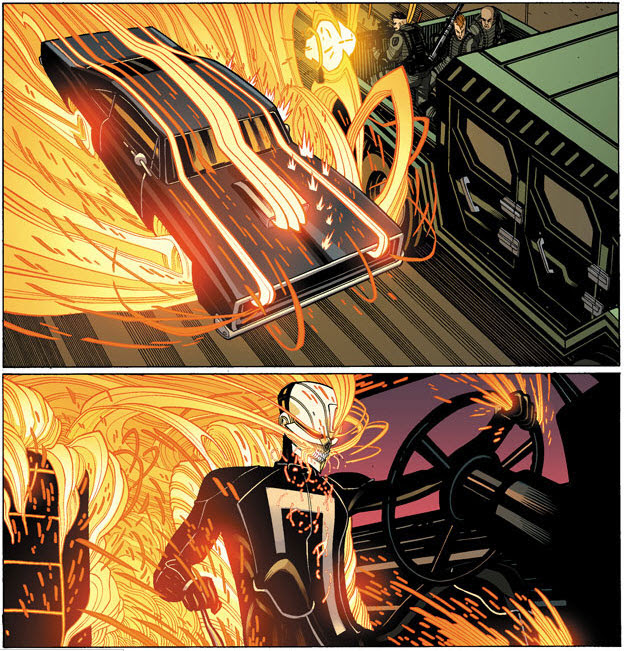 Eli and Robbie form a pact.  Eli will give Robbie the power to clean up his neighborhood so long as Robbie also helps Eli get vengeance on the gangsters that killed him.  The two take on the criminal enterprise of Calvin Zabo.

Johnny Blaze learns of the new Ghost Rider and meets with Robbie in Los Angeles.  Johnny warns Robbie that dealing with spirits of vengeance is rarely simple.  This later proves to be true.

Robbie learns that the spirit connected to him Eli Marrow was his serial killer uncle.  Eli had killed over 37 people in Satanic ritual killings.  Additionally, it was Eli who had tossed Robbie's pregnant mother down a flight of stair that had caused Gabe's disability.  The two battle for control of Robbie's body and eventually settle for a truce.  Robbie will allow Eli to kill people with his body so long as those people are evil. 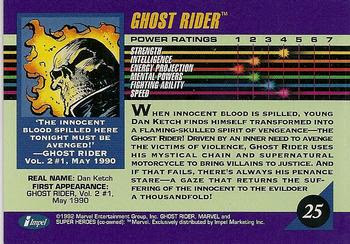 Each Ghost Rider has shown to have a variety of supernatural powers, weapons and vehicles.

In some stories is speculated that Ghost Rider could be one of the most Powerful heroes in the Marvel universe even capable of defeating the Hulk.  This is put partially to the test in World War Hulk in which the Hulk is met by Ghost Rider. 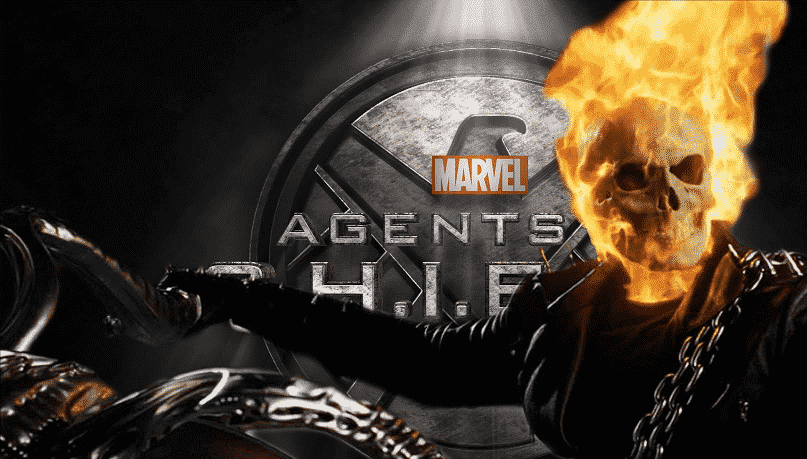 Agents of SHIELD began showing an emblem of a fire laced chain on its Season 4 promotions prior to San Diego Con 2016.  The show has a character named Hellfire that also uses a fire laced chain that initially was what fans thought the art meant.  However casting calls revealed that the show was looking for actors who would fit the part of Robbie Reyes and his brother Gabe Reyes.  Specifically, mention a Hispanic male who would be in a wheel chair similar to Gabe.  This has led to speculation that Agents of SHIELD may have been allowed to use the Robbie version of Ghost Rider.

Another thing that leads to Robbie appearing in Agents of SHIELD is that his origins are tied to the villain Calvin Zabo who was established as a character in Season 2 of Agents of SHIELD as Skye/Quake's father.

Actor Gabriel Luna has been confirmed to be playing Robbie Reyes AKA Ghost Rider in Agents of SHIELD.  A picture has been released of Gabriel in the Robbie Reyes driving suit.

The Ghost Rider has been confirmed to have a supernatural origin explainable by science.

In an interview with Collider actor Gabriel Luna revealed more facts about the Robbie Reyes version of Ghost Rider that Agents of SHIELD is bringing to TV.  He addressed the differences of the Robbie Reyes version of Ghost Rider with the previous iterations of Johnny Blaze and Danny Ketch.  The Johnny Blaze is currently those most well known do to having multiple movies and being played by actor Nicholas Cage.  Unlike the Johnny Cage version Robbie drives a car and not a motor cycle.  Luna went a little deeper on how the curse of Ghost Rider is different.

"Previous incarnations of the character are men who usually have a pretty decent life, to start out. Johnny Blaze is a famous Hollywood stuntman. Danny Ketch is not doing too bad to start with. And then, the Ghost Rider becomes this really heavy curse on them. Robbie is in an inverted position there. He had some hardships early in his life, and the Ghost Rider actually becomes an empowering thing. While it’s still difficult to deal with and very much a curse, he had some f*cked up shit going on before Ghost Rider ever came about."


On Ghost Rider having a supernatural and a non science origin Luna told Collider:


"That’s a huge wild card to throw into the mix. We’re starting to toe the line and inch towards some ground that hasn’t been covered, but that is a huge part of the books themselves and the entire Marvel universe and the canon of Marvel’s assortment of characters. What we haven’t touched on are things that can’t be explained perfectly by science. It’s a lot of really fun stuff that starts to lean into the world of Doctor Strange, Ghost Rider and Mephisto, and all of these other elements that also exist there, like ghouls and goblins and all sorts of cool things. We’re happy to be the ones to break the ice on that."

"Last season, Brett [Dalton] transformed into Hive and it was a really amazing effect that he did. I remember watching it on television and thinking how great it was. We’re using a lot of the same technology for my character. He took the Hive head off and put the Ghost Rider head on, and I thought, 'Wow, that’s great! It looks finished.' But, it wasn’t. A couple days ago, he showed me the finished version, and it’s really exciting to see. It moves and it thinks. There’s a lot of characterization in the face. He took care to preserve my performance in a bare bones skull. I’m thankful for that and I’m absolutely over the moon for people to see it. I think they’re going to be happy."


Pictures of Gabriel Luna as Robbie Reyes aka Ghost Rider 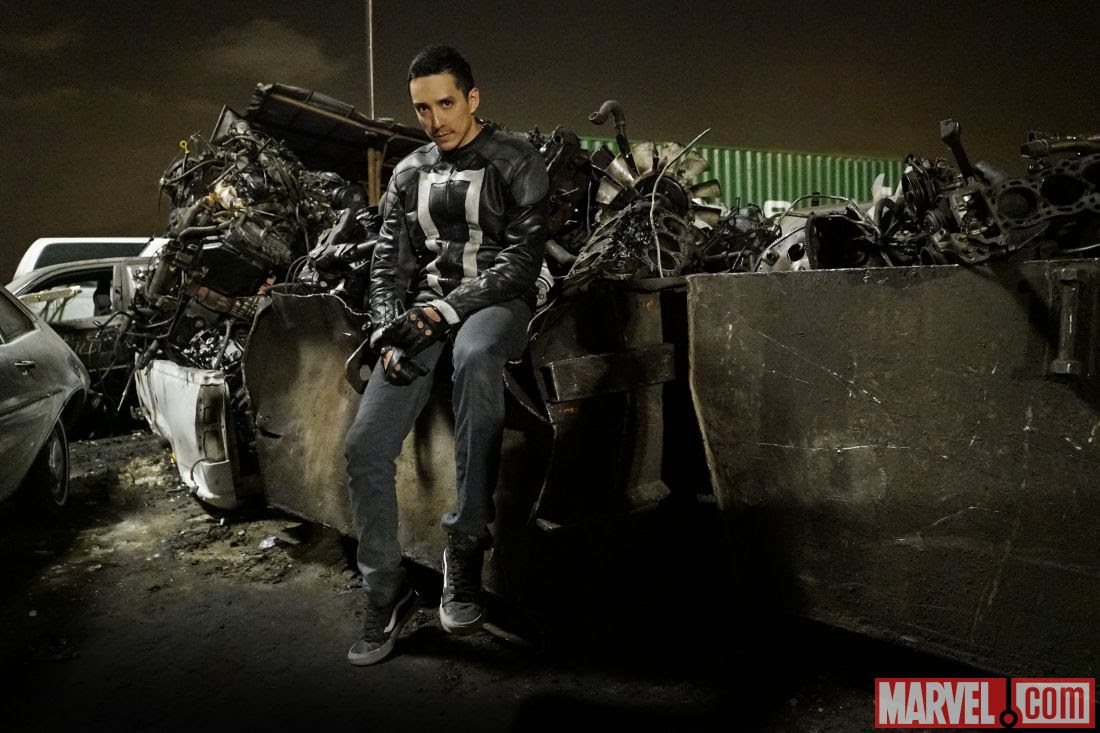 At San Diego Comic Con 2016 Agents of SHIELD officially announced that Ghost Rider will appear in the series with a short teaser.