Galactus: Good? Evil? Or a Force of Nature 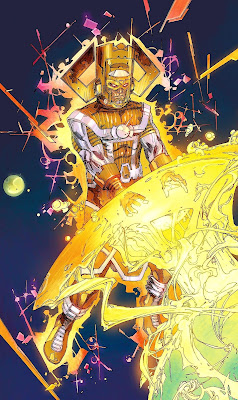 GALACTUS: Good, evil or just a force of nature?

Sole survivor of the universe existing before the Big Bang, Galactus is perhaps the most feared being in the cosmos. Untold billions of years ago, he was born the humanoid Galan on the planet Taa, a wondrous paradise of scientific and social achievement; however, his universe was in its final stages, with all matter plunging towards a central point via the "Big Crunch", collapsing into a new "Cosmic Egg", a sphere of disorganized, compact primordial matter. Galan, a space explorer, discovered a radiation-plague threatening all of Taa. Though he was initially scoffed at, the truth became clear as the people of surrounding planets perished. Despite the efforts of Taa's greatest scientists, no cure could be found, and the population began to die off. Galan convinced the handful of remaining survivors to die gloriously by flying a starship into the blazing cosmic cauldron. The others were killed by the intense radiation, but Galan was filled with new energy and saved by the Phoenix Force of the dying universe. The sentient energy spoke to Galan as it brought him into the Egg.

With the next Big Bang, the Cosmic Egg matter exploded outwards, eventually condensing into stars and planets. The future Galactus and his starship were re-created simultaneously with the embodiments of Eternity and Death, though he drifted inert for billions of years while new life began to populate the universe. The starship crashed on an unnamed planet, where Ecce The Watcher saw its occupant emerge as raw energy. Ecce recognized the danger the nascent being would pose and could have destroyed him then, but instead abides by his oath of non-interference. Launching his ship back into space, the being ejected its lifeless companions into the void, there to drift in endless flight. He then created a suit of armor to harness and regulate his awesome energies, and transformed his ship into an incubation chamber, where he spent countless centuries evolving into his current form. Eventually his craft again fell into orbit around a verdant planet, Archeopia. The advanced natives scanned the craft, detected its awesome energies, and wisely left it undisturbed.

Years later, when interstellar war spread into that space sector, the Archeopians' unidentified enemies mistook the incubation craft for a weapon and fired upon it. Emerging unscathed, the being who adopted the name Galactus swiftly slaughtered invader and defender alike, then consumed the life-energies of Archeopia, the first of many worlds that would perish for his hunger; only a small fleet of Archeopians managed to escape. Surveying the destruction he had wrought, Galactus decided to create a world to outshine any other in existence. Though it took millennia, including breaks to replenish his energies, Galactus completed Taa II, an immense ship engulfing the entire Archeopian system, which he made his new home.

Galactus initially went centuries between feedings, seeking out uninhabited worlds that could support life; but he gradually hungered more frequently, and began consuming inhabited worlds if he could find no others. He rationalized his actions by deeming himself a higher being, a belief made easier after learning of a prophecy that he would eventually compensate for all his destruction. In addition, he eventually encountered Eternity and Death, and the three beings hypothesized that Galactus represented a balancing force between the two opposites.


Having read the true birth, death and reincarnation  of Galactus, can we truly blame him for his actions? When a shark attacks a swimmer, when a bear malls a hiker, when a snake strikes, can we blame them for simply being what they are? Granted, Galactus has intelligence. He has the knowledge of the cosmos and untold millennia of time but, do his actions make him a villain? Is he like a great shark of the galaxy?

Doomed to swim the black vastness of the intergalactic seas. Doomed only to seek and to feed. Doomed never to die, never to know anything else but his hunger and loneliness. I think the PHOENIX FORCE and The Archeopians are to blame for this. Firstly, if the Phoenix Force had not tried to adapt and control such raw power to begin with, maybe Galactus would not have come into being. Secondly, how fBeep'in” piss poor is it to fire on a unidentified target?!?! Who runs your military? Trump?

I think, after learning more about Galactus, he definitely falls into the “Gray” area of good and evil. Is Galactus one of the most prolific genocidal murderers ON A PLANETARY SCALE that the galaxies have ever known? F'Beep'in  YES! However, can he be blamed for simply doing what he must to survive? Can we blame that shark for doing what a shark does?