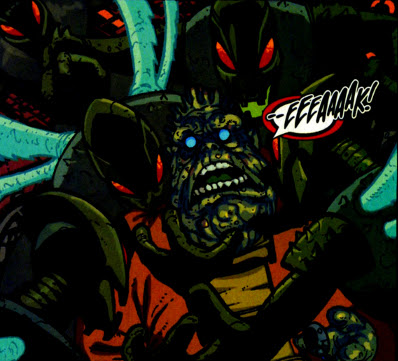 Tullk is a Marvel character who is hired by Ronan.  Tullk will appear in the film Guardians of the Galaxy volume 2 and be played by actor Tommy Flanagan.

Be warned there are some spoilers for Guardians of the Galaxy Vol 2 below the MCU section.

Bio:
Tullk has a very limited history in Marvel comics I could only find him in two issues Ronan Annihilation #1 and #2.

Tullk is a mercenary and information broker during the time of the Annihilation Wave.
Ronan hires Tullk to locate Tana Nile whom Ronan believes framed him.  Ronan pays Tullk with information on the Kree sentry patrols.  Tullk is rightfully incredulous that Ronan would so willingly betray the Kree Empire.  After Ronan leaves Tullk he sends a message to the Kree authorities that they have been compromised.  This effectively rendered his payment to Tullk worthless.

Tullk contacts Ronan again to give Tana Nile's exact location.  It is quickly revealed that this information came from Tana Nile herself.   Nile warns him not to play both sides again.


After this Tullk's ship runs directly into the Annihilation Wave where he is apparently killed.

It is possible that Tullk could have survived the Annihilation Wave or that he was brought back after Secret Wars.

MCU: Warning Spoilers for Guardians of the Galaxy Vol 2

Tommy Flanagan will play Tullk in the MCU film Guardians of the Galaxy Vol 2.  It could be that he is a member of the Ravagers or that he is an independent dealer.

Tommy Flanagan is well known for his part in the film Braveheart and his role on the television series Sons of Anarchy.

Tullk is a member of the Ravagers serving Yondu in Guardians of the Galaxy Vol 2.

Warning Spoilers for Guardians of the Galaxy Vol 2

Who is Ronan the Accuser?

Email ThisBlogThis!Share to TwitterShare to FacebookShare to Pinterest
Labels: #ComicNews, #Marvel, #ToylabWhoIs, For Today's #WhoIS who is Tullk a character that appeared in #GuardiansoftheGalaxy Vol2, Marvel