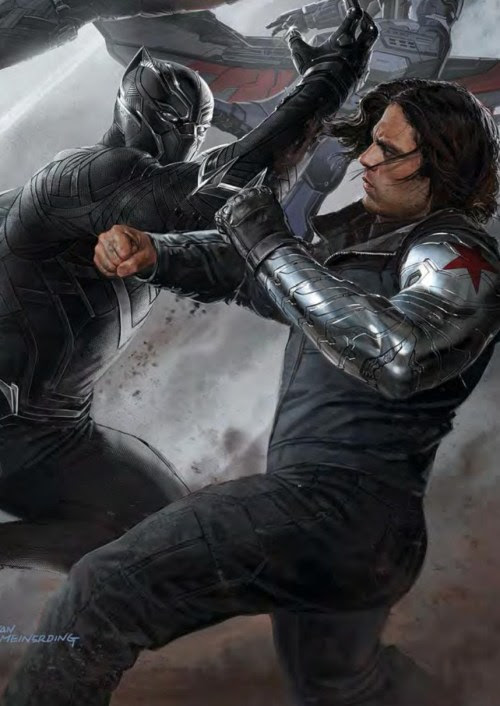 Winter Soldier and Black Panther are going to go at it in the upcoming film Captain America: Civil War.  The Black Panther will likely have a good reason for pursuing Bucky my guess is that the Panther believes that Bucky killed his father.  This leads to the battle who will win?

Well initially my thought is that Black Panther would take the Winter Soldier pretty easily.  Keep in mind the Panther was able to take down each member of Fantastic Four in individual bouts.   I also tend to think of Bucky as Captain America's side kick.  Lets back up though Bucky is heavily trained in combat and battle tested in WW2, he then has an added lifetime of experience of as a Soviet/Hydra assassin.  Granted a lot of this experience is messed up due to his mind being wiped, repeatedly.   Also he has super strong highly reflexive cybernetic arm.

The Black Panther matches the Winter Soldier with his own form of highly advanced martial training.  He has been trained since to birth to take on the Black Panther mantle.  He has also been imbued with added strength, speed, reflexes and durability from a mystical Wakandan plant.
The Panther sports a highly advanced suit that his made of light weight but nearly indestructible Vibranium mesh.  He also has a variety of high tech Wakandan gadgets and weapons.

My thinking:
I tend to think that if the Winter Soldier catches T'Challa outside of his suit then Bucky with his arm would have a serious advantage.  However if Black Panther is in his suit though T'Challa will be protected from just about anything that the Winter Soldier can throw at him.  In the end, I think Black Panther wins this fight and likely takes someone else.

First fight between Winter Soldier and Black Panther
In this first fight, Bucky fights T'Challa without his suit.  Yes, in this case Bucky has an advantage.


2nd fight between Winter Soldier and Black Panther
In this fight the Panther is more prepared for Bucky and well... I can only guess but I think the Panther has an edge in this one.

Stats and Powers of the characters in Heroclix:
Actually pretty even with an edge for the Panther. 
Marvel’s Captain America: Civil War finds Steve Rogers leading the newly formed team of Avengers in their continued efforts to safeguard humanity. But after another incident involving the Avengers results in collateral damage, political pressure mounts to install a system of accountability, headed by a governing body to oversee and direct the team. The new status quo fractures the Avengers, resulting in two camps—one led by Steve Rogers and his desire for the Avengers to remain free to defend humanity without government interference, and the other following Tony Stark’s surprising decision to support government oversight and accountability. Get ready to pick a side and join the nonstop action playing out on two fronts when Marvel’s Captain America: Civil War opens in U.S. theaters on May.