Master Pandemonium is responsible for one of the most disturbing stories in the Marvel universe.  It involves him hunting down and killing the children of the Scarlet Witch and the Vision. 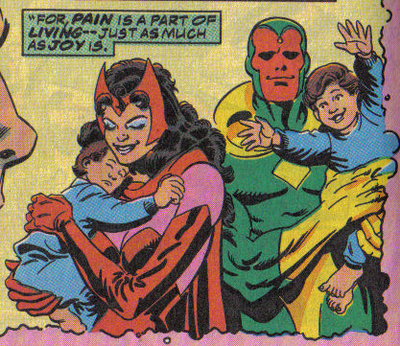 Scarlet Witch and Vision fall in love and get married.  The two want to have children but face one huge problem.  Vision is not a human but an android and while capable of many things having biological children is not one of them.  This problem is solved by the reality warping powers of the Scarlet Witch she simply magically creates two children, the twins Thomas and William.
The children though are not simply made of nothing they are actually forged from two portions of a soul.  Agatha Harkness reveals that the Scarlet Witch's powers can not create souls so that these portions of a soul were necessary to create the children.

Master Pandemonium is a man fused with a bunch of demons who is hunting to reconstruct his soul that he believes Mephisto has scattered.  He believes the two children of the Scarlet Witch and Vision are made of parts of his soul so he find them and absorbs them into himself.  This effectively kills Thomas and William.

However it is revealed that the pieces of souls that were being hunted by Master Pandemonium were never his soul but the soul of Mephisto himself.  Mephisto had tricked Master Pandemonium into being a soul blood hound.  Now reconstructed using the soul pieces Mephisto begins to battle the Avengers.  Mystic Agatha Harkness erases the memories of Thomas and Williams souls which hurts Mephisto and forces him back apart again.

All of this makes for one of the most disturbing Avengers stories of all time.  This is also an event that really drives the Scarlet Witch crazy and leads to her doing huge damaging things like erasing all mutants.

Yeah its pretty messed up.  I actually can't think of many Marvel stories that involve killing children like this.

Related characters:
Who is Master Pandemonium?
Who is Mephisto?
Who is Scarlet Witch?
Who is Vision?
on April 25, 2016