Why Iron Fist should be white

Why Iron Fist should be white 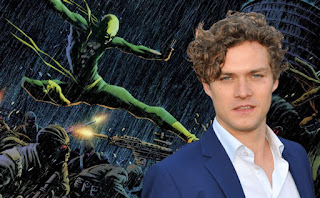 Background:
There has been a movement to push for an Asian actor to play the Marvel character Iron Fist. Even though the character has always been Caucasian in the comics it seemed like a reasonable place for Marvel to add diversity into the MCU. In particular there have not been many Asian characters in the MCU. However, changing a character race can cause issues. At Toylab we have bloggers who argue both sides of the controversial issue.
Why Iron Fist should be Asian by Sir Kent Said

About two years ago I wrote an article on why Iron Fist should be an Asian American.   My feeling then was that there was a lack of Asian heroes and making Iron Fist Asian would be a great chance to change that.

Since then though I have reread almost all of the original Iron Fist and Heroes for Hire.  In doing so I came to the conclusion of all white male heroes, Iron Fist is the most important to keep white. Am I off my rocker?

I better start explaining before bricks and chairs start flying at me.

Iron Fist had a short lived initial series.  He had a very short solo series and very few others over the years.  The only major one was Immortal Iron Fist in the 2000s that focused on primarily on older Asian Iron Fist's  (great series).   He spent the bulk of his years in team books and even disappeared for 6 years completely.

Most Iron Fist comics are not Iron Fist comics.  If the character had relied on those as his vehicle to the masses he would have been brushed away into the dust bins of history in the late 70s and forgotten.

But that didn't happen instead he has appeared many times and has been highly relevent.  Why?  Because Iron Fist joined forces with an African American hero named Luke Cage.  Boom this is where the uniqueness, power and relevance of Iron Fist begins.  This is the reason why we are talking about Iron Fist 30+ years after his solo series died.

Due to his cultural outsider status Iron Fist plays off well against Luke Cage.  In doing so they represent different opinions of all the white and black dudes coming together, talking, working together for a better future.  Danny is not a guilt ridden push of over, but he is an ever thoughtful person.   In so doing he becomes a great role model for all people in listening and empathizing  with others.  That my friends is both powerful, rare and very much needed.  Unfortunately,  this interplay would not work with an Asian Iron Fist.  Iron Fist's true super power is honest self reflection and empathy in a world that shows very little of either.

The unfortunate thing is I do not see another white character filling this role.

So to close there still needs to be more Asian heroes, but the white Danny Rand has important shoes to fill.

Does this solve the problem of low representation of Asians in comics?  No, but altering Danny's race would alter the most important social friendship in comicdom.  I believe this is not a zero sum game and there are a multitude of ways for Marvel to add some awesome Asian characters to the MCU and I hope they do so just not here.

More Fun Stuff to check out:
Iron Fist should be Asian by Sir Kent Said